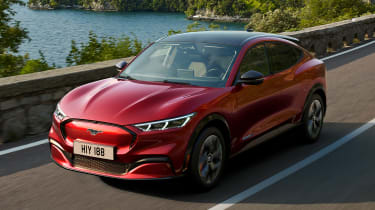 Sitting in the back of a camouflaged Mach-E as it’s driven around an airfield on the outskirts of Los Angeles is a surreal experience, but it does give a taste of what this all-new, pure-electric SUV has to offer.

When it goes on sale at the end of 2020, it’ll be offered with both rear-wheel drive and four-wheel drive as well as two battery options. Our Mustang Mach-E 4X gets the latter, complete with the big, 99kWh battery and 333bhp.

The first thing that really strikes you about being a passenger in the Mach-E is how much space there is. Even with the optional fixed glass roof, there’s room for someone well over six-foot to stretch out, even when sat behind a tall driver. It’s usefully more spacious than Jaguar I-Pace, for instance.

It shifts, too. Ford claims 0-62mph in under seven seconds for this Mach-E variant, but it feels way faster than that; the trademark, instant punch of electric acceleration never more shocking than as a passenger. There aren’t any claimed 0-30mph times yet, but we’d say it’s got to be substantially under the three-second mark for this variant.

The suspension on the prototype car feels quite stiffly sprung yet well damped. There’s not much body-roll, even through a heartily-driven slalom course, and while expansion joints send a noticeable thump through the car, it doesn’t feel brittle or jarring.

Ford has gone to great lengths to try and make this SUV live up to the controversial Mustang badge. While the concept of such an iconic performance badge being on an SUV is going to irk plenty of enthusiasts, even from the back seats the Mach-E does have a sense of being fun. Is it good enough to justify the pony on its nose, and to warrant the famous Mustang becoming a brand more than a model? That judgement call will have to wait until we’ve driven the finished article.