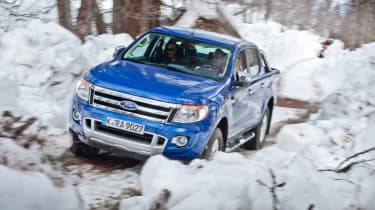 There is something loveable about a pick-up – and the Ranger ticks the right boxes with its rugged looks and huge versatility. It’s certainly much more grown-up than before, while the 2.2-litre diesel will have more than enough performance for most needs. It’s not an alternative to a regular SUV, but some business drivers will be prepared to put up with the compromises for the huge savings in tax.

Pick-ups used to be as simple as transport got – but lately, models such as the Ford Ranger have ladled on the luxuries.
Why? Because of a loophole. For the self-employed, a pick-up makes a cheap, well equipped family car, as it’s classed as a light commercial vehicle. This saves you the VAT and means a lower rate of company car tax.
Video: Watch official footage of the Ranger
[[{"type":"media","view_mode":"content_narrow","fid":"69355","attributes":{"alt":"","class":"media-image"}}]]
However, is the latest Ranger really an alternative to the Kuga? It’s more comfortable than before, the interior is more modern and top-spec models come with Bluetooth, iPod connectivity plus voice and cruise control.
This 148bhp 2.2-litre four-cylinder diesel was pretty quiet on the motorway and there wasn’t much wind noise from the huge mirrors. Switch the 4WD into low-ratio mode and select hill descent, and you can do some serious off-roading, too, while a 3,200kg gross payload is the same as the more powerful Ranger 3.2’s.
However, this is no SUV. The turning circle is vast and the ride jiggly over bumps, while the diesel is raucous at high revs. At 5.3m long and 1.85m wide, the big Ford won’t fit in most supermarket parking spaces, either. But then, neither will rivals such as the Mitsubishi L200.
The Ranger is a step forward for pick-ups and will continue to appeal for tax reasons. But for most buyers looking for more flexibility, a regular SUV and a used Transit make more sense.
Share this on TwitterShare this on FacebookEmail