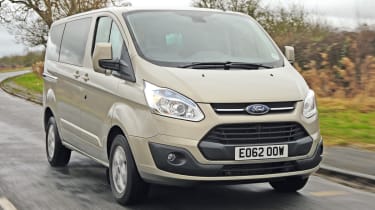 The Tourneo offers masses of space, yet doesn’t miss out on modern technology. There’s Ford’s latest kit, such as torque vectoring, which makes the driving experience rather good, too. It’s not the most handsome vehicle, but class-leading practicality, fuel efficiency and value for money mean it’s a brilliant people carrier.

The new Ford Tourneo takes the Transit’s platform and adds two rows of seats to create a family friendly alternative to passenger vans like the Volkswagen Caravelle and Mercedes Vito.

The all-new model shows off Ford’s latest ‘Kinetic Design’, but the Tourneo’s key selling point is space – lots of it. It’s now longer and wider than the old model, with masses of leg, shoulder and headroom in every one of the nine seats.

There are 30 configurations offered by the flat-folding seats, from complete removal to sliding them forward to make more boot space. Take out the second row of seats and you get a massive 5,520 litres of luggage space.

The revised 2.2-litre diesel isn’t as refined as a car engine, although it’s not overly noisy or intrusive. With 153bhp and 385Nm of torque, it’s not quick, but it isn’t underpowered.

Economy of 46.3mpg and 172g/km emissions impress, while good brakes and sharp steering make it more car-like than ever. It even has torque vectoring to boost stability.