A diesel engine has been added to previously all-petrol Civic range, giving Honda customers even more of a dilemma 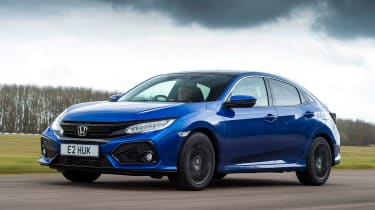 Company car drivers covering big miles will find plenty of appeal in the Honda Civic diesel. It’s incredibly economical, cheap to run and pleasing to drive, while the practical cabin and strong kit list is carried over unchanged. Make sure you do the sums, however, as those after a dependable urban runabout will be better served by the proficient turbo petrol, while cheaper SR-spec cars offer all the kit you’ll ever need.

While many manufacturers are turning their back on diesel, there’s a throng of high-mileage motorists who still depend on the stuff to cover big distances and keep costs down.

Determined not to ditch its dedicated derv drivers, Honda has just added a revised version of its 1.6-litre i-DTEC engine to the new Civic range. We first drove it on European roads back in January but now we’ve got one back in the UK to see whether it’s worth considering over the excellent 1.0-litre turbo petrol version.

The visual differences are nil, so the first thing you’ll notice is the numbers. The Civic i-DTEC promises more than 80mpg in mixed motoring, as well as CO2 emissions of just 93g/km. That not only trumps the petrol car’s 55.4mpg and 117g/km, but also makes it an appealing company car. Even when you take into account the diesel version’s three per cent Benefit in Kind (BiK) surcharge, those low emissions ensure it sits two tax brackets lower than the 1.0 i-VTEC. 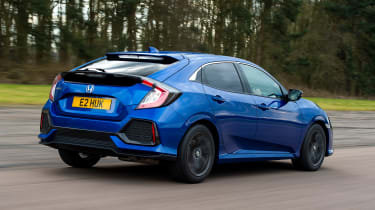 The well-sorted driving experience is another boon. The petrol car’s sharp steering, responsive chassis and precise gearing have all been carried over wholesale, while the torquey diesel motor is a strong performer – both in town and on the open road.

There’s no denying it’s a bit louder on the move. Whereas the turbo petrol is barely audible at low speeds, the diesel ticks along with a gruff rumble. Let the revs rise and you’ll notice the noise, while the stop-start system is less refined, too; the engine rattling into life with perceptible vibration when you dip the clutch pedal.

Still, things improve at motorway speeds, where the diesel engine settles into a hushed cruise. This is important, because that’s where many diesel drivers will spend most of their time. And while the 1.6 i-DTEC can’t match 2.0-litre rivals for torque, the punchy motor pulls strongly from low revs. 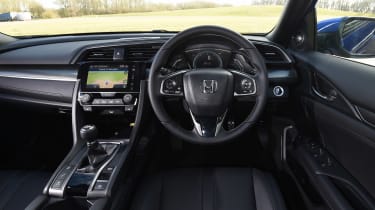 Like the petrol car, the diesel version rides well on Britian’s rutted roads. It’s stiff yet composed, without feeling too brittle over bumps and potholes. Top-spec EX models get adaptive dampers, too, though in all honesty the different modes make seemingly little difference.

Our EX test car is pricey, however. The well-equipped SR version is almost £3,000 cheaper, while a like-for-like 1.0 petrol will save you a considerable £1,310 on list price alone – or around £50 per month. All cars (including the basic SE) get a DAB radio, USB connectivity, climate control and alloy wheels, while range-toppers boast a sliding glass roof, leather seats and a keyless entry. Our car’s Tech Pack (£600) added wireless phone charging, LED lights and heated rear seats.