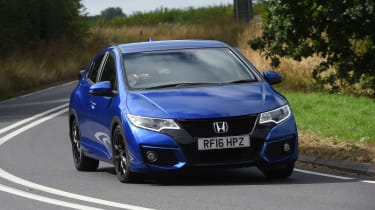 The 1.4-litre engine in this Honda Civic Sport feels decidedly old-hat alongside more modern turbocharged rivals, but you can’t argue with the car’s cool styling and rock-bottom running costs. While the interior is feeling a little out of date, there’s loads of kit and thanks to some attractive finance offers, it’s decent value too.

For years, manufacturers have been adorning their lesser-engined models with fancy bodykits and bigger wheels to give the impression of power and performance without the raised running costs that would accompany an actual hike in horsepower.

BMW is a longstanding master of the art, with flashy M Sport parts now available across its range. Volvo has its R-Design variants, while Kia and Peugeot use the GT Line moniker. The formula is always roughly the same.

The Honda Civic Sport is nothing new, however. We first tried it in February last year, just as the current car had undergone a mild mid-life facelift. Along with revised lights and new bumpers, the Sport hinted at the then yet-to-be-revealed Civic Type R, acting as a convenient half-way-house between the tame standard models and the fire-breathing 306bhp hot hatchback. 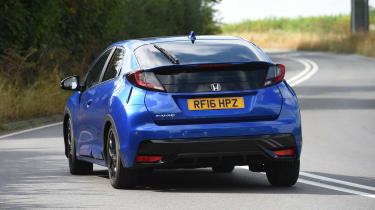 That’ll be a big pull for younger drivers, many of whom prioritise style and running costs above performance or handling. It’s also available with some seriously attractive zero per cent finance offers. In fact, with a £4,000 deposit, you can have one on your drive for £182 per month.

Standard kit is good, with all Sport models getting a seven-inch touchscreen, DAB radio and Honda’s Connect infotainment system. The gloss black 17-inch wheels are also included, as are front and rear parking sensors and a reversing camera. In fact, the only option on our test car was the £525 ‘Brilliant Sporty Blue’ metallic paint.

So it ticks the style and equipment boxes, but what’s it like to drive? Well, with tough competition from more modern rivals, the Civic remains an also-ran in terms of performance and handling. The steering is better weighted than it is in the CR-V, but it doesn’t offer an enormous amount of feedback. It’s responsive enough, though, and you’re never left unsure of where the front wheels are pointing. Body roll isn’t too much of an issue either, while the ride is acceptable given the Sport’s bigger wheels. 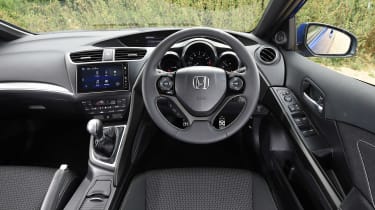 Getting up to speed requires patience. In this day and age, most small capacity petrol engines come with a turbocharger bolted on, allowing acceptable performance with lower running costs. As a result, the Honda’s naturally aspirated 1.4 feels rather sluggish. Any overtakes necessitate careful planning, while pulling away from junctions can be a laborious affair. The elevated driving position takes some getting used to, but anyone stepping out of an existing Civic will feel right at home.

Despite having six gears this 1.4-litre Civic Sport it’s not all that refined at high speed. Wind and tyre noise isn’t an issue, but there’s a noticeable drone from the engine at 70mph. Cabin quality is acceptable, but falls short of newer models like the Vauxhall Astra or Renault Megane.

Practicality remains a Civic strong point, and is unaffected by the engine and trim selection. That means all models benefit from Honda’s excellent Magic Seats, which fold flat in one motion to provide up to 1,378 litres of bootspace. The frustrating boot spoiler remains and continues to affect visibility out the back, though.