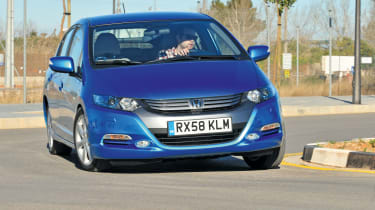 THE all-new Insight has a lot going for it. This is a realistic, cut-price alternative to the Prius, and is exactly what the hybrid market has been looking for. It’s a shame the model doesn’t look particularly futuristic, but with its fun, interactive personality, the Honda can only be good for future mainstream hybrid acceptance.

Buyers wanting green credentials in a practical package now have a genuine alternative to the Toyota Prius: the latest Honda Insight.

Described by its designers as an ‘ecolution’ of the original Insight, it looks more like an evolution of the current Prius. But there is more to the Insight than its appearance. It gets a 1.4-litre petrol-electric drivetrain, hooked up to a continuously variable transmission. And an Economy mode boosts efficiency by limiting power and bringing stop-start into effect earlier.

The result in this top-spec ES-T is 61.4mpg and 105g/km of CO2. But the neatest feature is Eco Assist, which changes the dash display from blue to green and makes a series of graphic plants grow or wilt depending on how efficiently you drive. A summary at the end of each trip tells you if you’re improving.

It’s sharper to drive than the Prius, too. On the downside, the CVT box means refinement isn’t great, while cabin quality and rear space could be better. But at less than £17,000, even the top-of-the-range Insight will be a cheaper option than the new Prius, and it could also steal sales from the Ford Focus and VW Golf.

Click here to see a video tour of the new Insight

Rival: Focus ECOnetic ford’s stylish diesel offers similar economy to the Honda. Plus, it handles better and has a similar price, so is a tempting option.