The 80s was the decade when the hot hatch found its feet and the best examples are now collectors’ items... 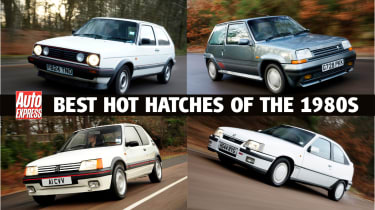 While the typical supercar and super saloon are well beyond the financial reach of most people, the average car buyer has long been able to get their hands on something fast and exciting thanks to the existence of the hot hatchback.

The formula is very simple: take a small, sensible family hatchback, whack a big engine under the bonnet, perhaps make some suspension tweaks to help the car cope, and fit a more purposeful body kit.

It’s a market segment that really started to explode through the eighties, with the release of some truly iconic examples of the breed. Most - if not all - of our best 1980 hot hatchbacks are considered highly sought-after classics today; with so many modified or crashed (or both) in period, many are hard to find on the used market, so values are on the rise.

Scroll down for our pick of the 1980 hot hatches and click here for the 10 best new hot hatches on sale today... 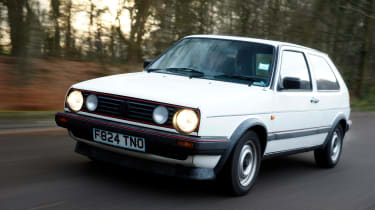 Hot hatchbacks did exist before the Golf GTI, but it was Volkswagen that defined the segment. The Mk1 model blew away buyers and testers alike when it hit showrooms back in 1976, but to many, the later Mk2 is the one which set the standard for later Golfs.

Heavier and larger than its predecessor, the Mk2 became the ‘grown up’ hot hatch; a tradition that each of its successors has continued. This is a car that’s still a huge amount of fun to drive - the lively 1.8-litre engines, later with a 16-valve head, saw to that - but does so while feeling just as refined and as easy to drive as the more basic Golfs. The styling gave off clear sporting intent, thanks to unique badging and red highlights, but was classy and understated at the same time. 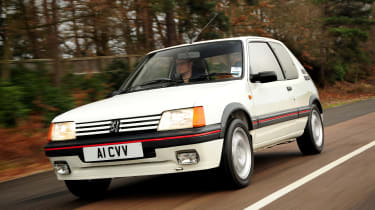 It’s often said that the VW Golf is the original GTI, but to many, those three letters were at their best when applied to the handsome body of the Peugeot 205. While 130bhp from a 1.9-litre four-cylinder engine (or a revvy 1.6 with 115bhp, which came first) doesn’t sound like much today, the 205 GTI weighs in at just under 900kg. Combined with a sweet five-speed manual gearbox, it’ll crack the 0-62mph dash in 7.8 seconds - impressive, considering that puts it only just over a second behind a BMW M3 of the time.

That lack of mass made it feel sharp through the corners, too. Perhaps too sharp for some: in period, the 205 GTI was infamous for its lift-off oversteer - the phrase “dragged through a hedge backwards” could have been coined for yuppies in their fast, French superminis. Today though, modern tyres round off the scariest edges, leaving a level of agility, adjustability and interaction that even the best current hot hatches just can’t compete with. 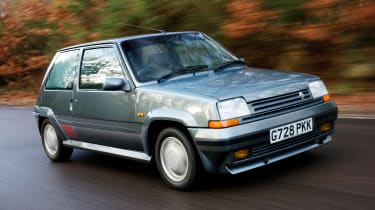 Few - if any - manufacturers have produced such consistently great hot hatches over a period of 30 years as Renault. The 5 GT Turbo followed on from the mad mid-engined Renault 5 Turbo and Turbo 2, but took on the more conventional hot hatch formula of an engine in the front and front-wheel drive. But while turbocharging is commonplace in the current crop of hot hatches, it was rarer in the eighties, and as such it gave the dinky Renault a distinctive character.

The 1.4-litre unit offered up to 120bhp, which helped it see off the 0-62mph dash in 7.5 seconds. At the time, its handling was highly rated by road testers: almost as pointy as a Peugeot 205 GTI, but with less of the terrifying on-limit edginess.

And it really looks the part, too. Boxy wheel arch extensions, eighties-tastic decals and throwing star alloy wheels - not to mention one of the best looking steering wheels fitted to any hot hatch - and few examples of the performance family car before or since have looked so cool. 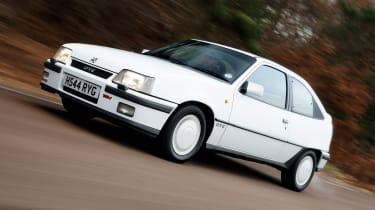 Vauxhall’s take on the hot hatch always tended towards the lairy end of the scale - a trend well and truly set by the Astra GTE. White wheel trims (imagine selling a hot hatch without alloy wheels today?) colour-coded to the rest of the car looked so period correct - it couldn’t have looked more eighties if Tom Selleck’s mustache was stuck to the front grille. Inside, the GTE jazzes up the basic square Astra cabin with some supportive Recaro seats and GTE badging on the steering wheel.

But it was the driving experience that impressed the most. This was a car that felt so approachable yet still fun, stable yet still adjustable. The GTE was a hot hatchback that would let its driver cover ground at a rapid rate without turning their knuckles too white. 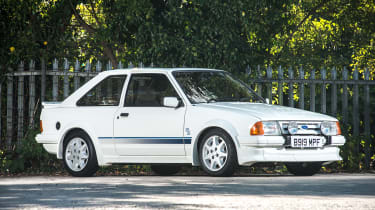 Turbo was a cool word in the eighties. Whether it was on a pair of sunglasses or a hair dryer, those five letters would be used to inject some excitement into the most common everyday items. They certainly did the job on the Ford Escort. However, the Escort RS Turbo was more than just a name: Ford’s humble 1.6-litre CVH engine received forced, intercooled induction to take the car’s total output to 132bhp.

Helping get that power down to the road was a viscous coupling-based limited slip differential (a first for a front-driven road car), while the chassis was toughened up to keep everything in check. Body-colouered bumpers and a rear wing - hinting at Cosworth-tuned fast Fords to follow - helped distinguish the RS Turbo from lesser Escorts, and like in the Astra GTE, drivers were kept in place by a brilliant set of Recaro seats. 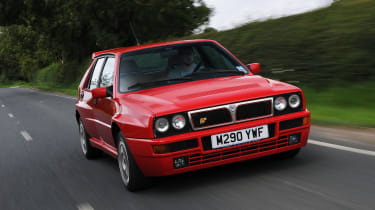 The Group A era of the World Rally Championship threw up some of the most exciting competition in the sport’s history. Homologation rules that forced manufacturers to produce 5,000 (or later, 2,500) road-going versions of their special stage hunters created some of the coolest cars we’ve yet seen - and none were cooler than the Lancia Delta Integrale.

The humble Delta was transformed into one of the finest and most desirable hot hatches ever produced thanks to a four-wheel drive and a 2.0-litre turbocharged engine. Power grew from 182bhp in early models to 212bhp in the later Evo II versions, and thanks to a brilliantly balanced chassis, little else on the road could keep with its cross-country pace. Little else on a rally stage could either - the Delta helped Lancia to achieve six consecutive World Rally Constructors' championship wins, and three driver’s titles. 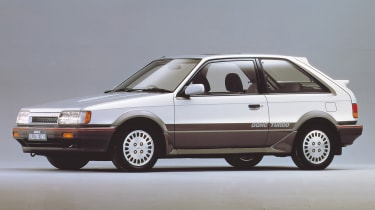 Here we have one of the more leftfield choices of the eighties hot hatch hits, the biggest challenge to prospective 323 4x4 Turbo buyers today is finding one. The Turbo didn’t sell particularly well in the UK, and now there are barely a handful left on the road.

But find one now, and it’s not without its charm. Like the Lancia, Mazda built its 323 4x4 Turbo to comply with rallying homologation rules. So thanks to a four-wheel drive system, the 323 was excellent in the sort of damp, slippery conditions typical of UK roads most of the year round.

The 1.6-litre turbocharged engine didn’t have the raw speed of the Lancia’s - indeed it was more of a match for the front-driven hot hatches of the time - but Mazda did produce a chassis which testers in period commended for its adjustability. 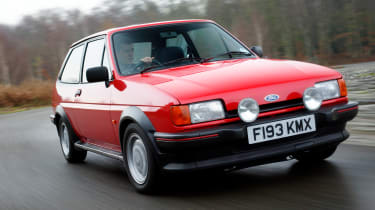 One of the most recognisable hot hatches of the eighties is without question the Ford Fiesta XR2. The pepper-pot alloy wheels, the additional spotlights mounted to the front, and the big, flared wheel arches - everything about the XR2 screams sportiness.

Producing 84bhp (Mk1) and 96bhp (mk2) from a 1.6-litre petrol engine, the XR2 didn’t quite have the pace to keep pace with some rivals. However, that’s not so much of an issue today, where the XR2 just offers up such a massive feelgood factor. And you feel truly involved with the experience, too; there’s no power steering, no ABS, no safety net to get between you and the car.

Perhaps its greatest legacy came from kicking off a series of small fast Fords, which would lead us to the Fiesta ST of today - one of the finest hot hatches ever built. 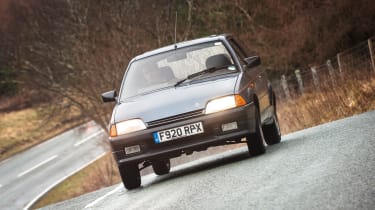 If there’s one philosophy that’s shared by every true performance car, it’s that weight is the enemy. Supercar or hot hatch, it’s always the same: too much mass hampers acceleration, braking, and cornering ability - basically everything that makes a car fun.

To that end, the Citroen AX GT tips the scales at just 745kg - barely a tank of fuel more than an original Lotus Elise. And while that means the front wings are paper thin and the dashboard top feels like it’ll barely support a packet of crisps, few cars on this list will put such a huge grin on your face.

The fun here is to use the light weight to maintain speed through the corners, and the brilliant chassis is more than happy to oblige. The little 1.4-litre, twin-choke carb-fed engine makes a modest 85bhp, but it sounds angry and loves to be thrashed. Examples are rare now, but well worth seeking out. 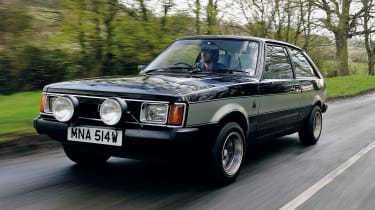 Whenever Lotus is willing to put its name to a car, it’s a pretty safe bet that it’ll be a hoot to drive. The Talbot Lotus Sunbeam is no different.

Okay, so we know that the Talbot Sunbeam Lotus came out in 1979, but it was still sold during the eighties and it’s too cool to leave out. It’s a car that’s got brilliant rally pedigree - Talbot took the World Rally Championship manufacturer’s title in 1981 - but it was great on-road, too. Unique in this top 10, the Sunbeam is rear-wheel drive, giving it a completely different character to its contemporaries.

Beyond working its magic on the chassis, Lotus ditched the standard sunbeam engine and dropped in a 2.2-litre version of its own twin-cam units. 150bhp in the early 1980s was an impressive figure, and the performance lived up to the numbers. Nowadays, the Sunbeam Lotus is very desirable on the used market, and as a result they can fetch anything from £15- £30,000.

What is your favourite hot hatch from the 1980's? Let us know in the comments below...