The Fiat Panda is as luxurious as it is quick - with an appealing price tag, too 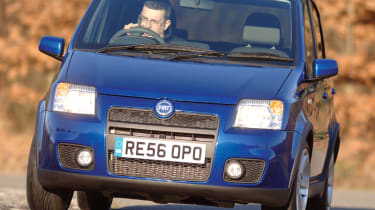 Luxuries such as climate control and electric windows boost the Panda 100HP’s appeal, but they haven’t spoiled the raw pleasure of this Fiat’s responsive chassis. With 100bhp, and a 0-60mph sprint time of 9.5 seconds, it feels impressively quick against the clock. And as if that wasn’t enough, the £9,995 price tag is among the most competitive in its class.

There’s something about small, fast Fiats that has kept the firm at the front of its field for more than 40 years. But in an era which demands every new car comes with multiple airbags, anti-lock brakes and first-class crash protection as standard, is it still possible to build a model that’s super-small, yet light and agile enough to be fun to drive? Fiat’s new Panda aims to show it is...

With around half the power of Vauxhall’s forthcoming Corsa VXR or the Renaultsport Clio 197, the Panda 100HP offers a 0-60mph sprint time of 9.5 seconds and a top speed of 115mph. Clearly it’s no slouch, but as every enthusiast knows, a good driver’s car is much more than the sum of its performance figures. Happily, the new Panda doesn’t disappoint.

Chunky alloy wheels and revised suspension which is 25mm lower and 25 per cent stiffer than the standard car means the 100HP is stable through the most demanding of corners. There’s very little body roll, and although there’s not much feedback from the steering wheel, the Panda turns in very sharply, which is reassuring on twisty roads. The front wheels offer vast amounts of grip, and the car feels settled even when cruising quickly.

The all-round disc brakes provide plenty of stopping power, while the six-speed gearbox is slick-shifting, with short, punchy ratios that suit the rev-hungry 1.4-litre engine perfectly.

So in short, the new Panda’s driving experience will live up to the expectations of those with one eye on Fiat’s fast car history books.

What’s more, the 100HP looks great. With metallic blue paint, it has a surprisingly grown-up appearance for a city car – and its sporting credentials are boosted by deep front and rear bumpers and unique flared wheel-arches. At the rear, there’s a chrome exhaust and red Panda badging.

However, from the cabin, it’s clear that the £9,995 price tag can only buy the driver so much. And although the thickly bolstered sports seats are comfortable and supportive, compared to some of the Fiat’s more expensive rivals, there are no other overtly sporting styling cues inside.

Even so, overall space remains generous for such a small machine, while the five-door body means the Panda is still a versatile runabout. Is there anything missing from the package? Not if you consider the generous equipment list, which adds hi-tech extras such as Bluetooth phone compatibility and climate control.

So, can Fiat build a modern car that serves up all the thrills of old? If the new Panda 100HP is anything to go by, the answer has to be a resounding yes. Fans of the famous brand have a model to be proud of.