Hyundai's new i20 Active aims to muscle in on the booming crossover segment, but does it do enough? 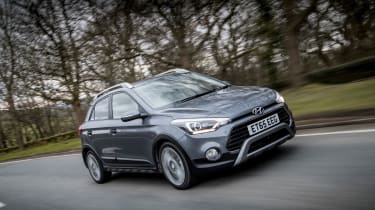 With a lack of a true small crossover in Hyundai’s current lineup, the i20 Active is as close as you’ll get for now. It’s stylish, well-made and practical, while the refined an efficient new turbo petrol is a welcome addition. But we question whether many buyers will cough up an extra £1,200 for what amounts to little more a few faux-SUV styling add-ons, and a Renault Captur is a more distinctive prospect. Still, if you must join in with the crossover trend but have a strict budget, it’s not a bad choice.

Hyundai's i20 is still a relatively young car, less than a year old - but the company isn't resting. In the i20 Active, it adds two important new developments to the Ford Fiesta rival - a punchy, 1.0-litre turbo engine, and a jacked-up rugged styling pack to satisfy the car-buying publics thirst for small crossovers.

Despite sounding like just another trim level, the i20 Active appears, at first glance at least, to be a different prospect.  Its mini SUV-like stance is bolstered by chunky new bumper designs, skid plates front and rear, roof rails and plastic lower body cladding. 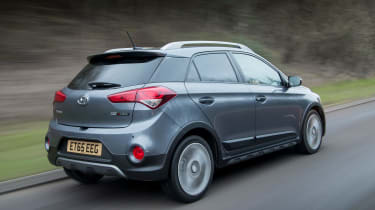 The ride height has also been raised by 20mm, and it gets 17-inch alloys as standard. These additions come at a cost, however, the Active is £1,200 pricer than SE spec on which it’s based. The changes look successful overall, and the i20 was already a smartly understated car, although detailing like the fake metallic fuel-filler cap and round rear reflectors won’t be to all tastes.

Don’t be fooled by the pumped-up styling, however, as it’s more about form than function. Like the Dacia Sandero Stepway, four-wheel drive isn’t offered even as an option for the Active. Hyundai bosses claim that the jacked-up supermini market is so marginal that it doesn’t justify engineering such a system. But Suzuki clearly saw a reason to with the Swift 4X4.

Inside, it’s unchanged from the regular i20, which means you get a solidly built, spacious and sensibly-laid out cabin that isn’t particularly inspiring to look at. Our test car was kitted-out with sombre dark fabrics and plastics; perhaps more colour and vibrancy inside would make sense given the Active’s youthful target market. Nevertheless, the i20 remains one of the more practical superminis on the market, and standard kit includes a DAB radio, Bluetooth and cruise control. 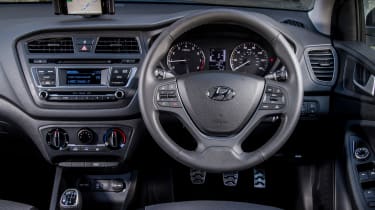 The only engine on offer in the Active is the new 1.0-litre three-cylinder turbo petrol in 99bhp form. It’s much better than the 1.4 petrol it replaces, with a healthy 171Nm of torque making it far more flexible in-gear. You need to rev past 3,000rpm to exploit its performance, but at least refinement is much improved.

We’re surprised the Active isn’t offered with the more powerful 118bhp version from the hatch, which also brings a six-speed manual gearbox, as that feels more willing at higher revs. Efficiency is another big benefit of the turbo, but Active spec sees MPG drop from a competitive 65.7mpg in the hatch to a slightly less impressive 58.9mpg. CO2 emissions also increase from 99g/km to 110g/km. 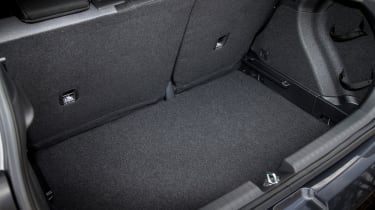 Hyundai is quick to point out that the Active has been tuned specifically for European roads. Interestingly, the suspension is actually a bit stiffer than the regular i20, which engineers say is to counter the extra body roll. Body movement is kept in check reasonably well, and the steering is accurate, but the i20 remains a safe and stable rather than a fun car to drive. The standard-fit 17-inch alloys also mean the ride is more unsettled by large bumps, especially compared to a regular i20 we tried alongside this with 15-inch items.