Can the new Hyundai i30 family hatch provide real competition for the Golf, Astra and Focus? 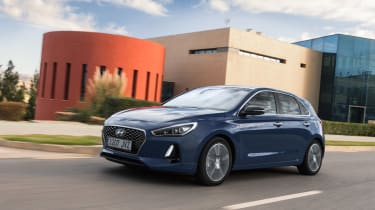 The all-new Hyundai i30 has come on leaps and bounds over its dreary and uninspired predecessor, but still fails to ignite the imagination or stir the soul. It’s well built, refined and economical, but in a fiercely competitive class that features cars like the stylish Renault Megane and excellent Vauxhall Astra, it remains a rational rather than an emotional family car choice.

Few people buy a Hyundai because they desperately want one. Many consider the Korean brand a kind of ‘white goods’ manufacturer, producing well-rounded and capable cars that tend to be slightly lacking in the style stakes.

Bosses think that’s all set to change with the latest Hyundai i30, which launches here in the UK in March. We first drove the all-new hatchback last summer in the shape of a heavily-disguised prototype, and were impressed with its high-speed ride, taught handling and peppy new turbocharged engine. Now we’ve driven the car you’ll be able to buy from dealers (and online using Hyundai's innovative Click to Buy scheme) in just a few weeks time.

It’s been designed, developed and tested in Europe, specifically for European buyers. Hyundai reckons this will offer its customers an accessible and appealing car that is also great to drive. In fact, marketing boss Jochen Sengpiehl says the new i30 offers “everything today’s customers expect”. A big claim indeed. 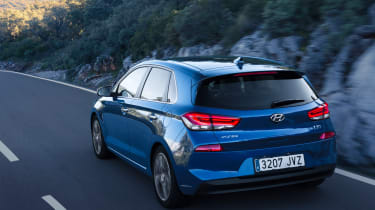 It’s certainly a better looking car than before. Designed afresh from the ground up, the i30 you see here is all new, boasting the company’s new cascading grille and bold nose – features that’ll later find their way onto the face of all new Hyundais.

The design is smart rather than arresting, and fades into the background when sat next to a new Renault Megane or Peugeot 308. It can easily match a VW Golf, Vauxhall Astra or Ford Focus for visual appeal, though, with sharp LED tail-lights giving a classy and understated look.

Inside, the cabin focuses around a clear eight-inch touchscreen. It’s standard on SE Nav models and above, while lower spec cars get a smaller setup. Apple CarPlay and Android Auto both feature, allowing easy connectivity whatever your handset preference, while wireless phone charging comes on all cars fitted with that big screen, too.

On the whole, the i30 feels solidly built, with soft-touch materials on the doors and on top of the dash. Bizarrely, though, Hyundai has fitted a cheap-feeling scratchy panel that runs from left to right directly in front of the driver and passenger. It’s a shame, because you immediately notice it every time you start the engine, unpleasantly scraping your fingernails as you feel for the starter button. The leather-wrapped steering wheel feels suitably plush, however, and the seats are well bolstered and comfortable over longer distances.

Under the skin, the new i30 features a highly rigid yet lightweight body that claims to offer a compliant ride and improved driving characteristics. There’s a choice of three engines for UK buyers, including an all-new three-cylinder turbo petrol and a familiar 1.6-litre CRDi diesel.

While it’s the latter that Hyundai predicts will bring big success in the fleet market, it also has high hopes for the 1.4-litre turbo we’ve driven here. Retail customers are showing a sizeable shift towards petrol power in the wake of VW’s on-going emissions scandal and Hyundai thinks this version if the i30 can cash in.

On paper, it’s a solid choice. It’ll sprint from 0-62mph in 8.9 seconds, and also return more than 50mpg. Emissions for this manual car stand at 124g/km, which is just 4g/km short of the much slower Megane TCe 130. There’s a seven-speed dual-clutch automatic gearbox, which commands a £1,000 premium without much in the way of efficiency compromises. 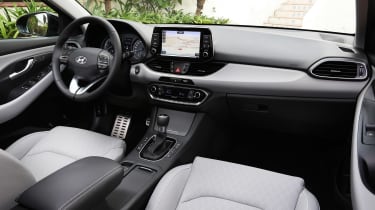 The engine feels punchy enough, pulling strongly up motorway slip roads and out of tighter bends. It’s more sluggish if you ask for too much grunt from low revs, but keep it in the power band and it’ll accelerate cleanly for brisk overtakes. Body control is good, too, the i30 resisting roll with plenty of mechanical grip.

The steering isn’t as sharp, however, requiring lots of little adjustments to keep the car on the straight and narrow. There’s little feedback through the wheel, which doesn’t fill you with all that much confidence on a twisting mountain road.

The trade off for that tight body control is a fidgety ride around town, but it smoothes out nicely at motorway speeds. In fact, the i30 is a remarkably refined cruiser. We can think of little else in this class that is as quiet at 70mph, though we’ll have to subject it to our rigorous road test back in the UK to see if it can beat hushed rivals like the Vauxhall Astra. There’s a little wind noise and tyre roar at high speed, but nothing that wouldn’t be drowned out by the standard-fit DAB radio. 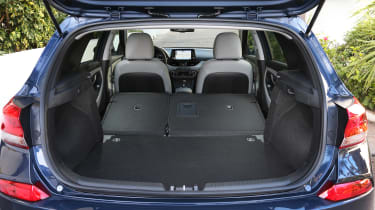 Sengpiehl reckons the new i30 offers everything customers expect, and while that may not be true lower down the range, look further up and things start to improve. Standard equipment is good, with our Premium SE-spec car featuring 17-inch alloys, dual-zone climate control and automatic LED lights, as well as heated leather seats.

It’s loaded with safety kit, too. Autonomous Emergency Braking and Front Collision Warning are both included, as is Lane Keeping Assist, High Beam Assist and Driver Attention Alert. Rear Cross Traffic Alert, which scans 180-degrees behind the car when reversing, is an option, and one well worth having. Our car might look expensive, but the more modest SE Nav trim knocks more than £3,000 from the list price – and should save you precious pounds when it comes to a monthly PCP.

Behind the rear seats you’ll find a useful 395-litre boot, which beats the venerable VW Golf by a full 15 litres. Fold the rear seats flat and this expands to 1,301 litres – again beating its German rival. Disappointingly, there’s not as much room in the rear, with head and leg room tight for anyone over six-foot. A Skoda Octavia is much bigger.