An environmentalist's dream, we get behind the wheel of Hyundai's latest prototype the Tucson FCEV 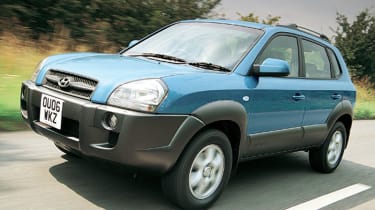 WE are still some way off being able to go to our local dealer and buy a Hyundai powered by a hydrogen fuel cell. But our time behind the wheel of the Tucson FCEV prototype bodes well for the future. The car is clean, efficient and very easy to drive - and only a limited range and a high kerbweight mark the hi-tech off-roader out as work-in-progress. We can't wait for 2016.

Zero-emission motoring is getting closer by the day, and ironically, it's the environmentalists' most hated car which is spearheading the charge. And although the SUV is very unpopular, it's the vehicle's failings - its weight, comparatively poor efficiency and high production costs - that make it such an ideal donor for hydrogen fuel cell technology.

Which is why Hyundai has chosen the Tucson to showcase its second-generation fuel cell system. During the past year, the Tucson FCEV (Fuel Cell Electric Vehicle) has been testing in California. And to prove exactly how far it's progressed, the Korean company invited us to climb behind the wheel for an exclusive drive in Germany.

The FCEV varies from the original 2003 Tucson Fuel Cell prototype in several key areas: it has twice the range (186 miles), has been designed to operate in sub-zero temperatures and packages its futuristic drivetrain under the bonnet, where it doesn't interfere with passenger or luggage space. Aside from the different instruments, in fact, you'd be hard pressed to tell the FCEV apart from any other Tucson model.

Until you turn the ignition. There's a slight vibration through the brake pedal and a distant high-pitched whine from under the bonnet - but it's still eerily quiet. Slot the automatic gearlever into Drive, press the throttle pedal and you are in motion. It doesn't race off like a scalded cat, but accelerates quickly and smoothly up to 50mph, keeping up with the cut and thrust of inner city traffic. The car's top speed is 93mph, and on our test track it needed a lot of patience to get there! But the Hyundai happily cruises along at motorway speeds.

The fuel cell draws hydrogen from a 152-litre tank located under the rear seats, and powers a motor mounted below the boot floor. It produces a total output of 80kW - around 107bhp. The motor also draws on the batteries during hard acceleration and, as is the case in Toyota's Prius, recharges itself when not in use - although sadly there is no Prius-style power flow display to keep you entertained. Even with its aluminium body panels, this SUV tips the scales at a hefty 1,765kg - a legacy of that 200kg hydrogen powertrain. So you don't get the same level of body control or grip in corners that standard Tucson owners enjoy. Adjust your driving style to compensate for the extra bulk, however, and you'll find progress in the FCEV is effortless.

Although US giant General Motors insists it will be ready to bring hydrogen power to market by 2010, senior engineers at Hyundai estimate that it will be another 10 years before we see its technology hit showrooms. When it does, it will almost certainly be in a Tucson, Santa Fe or similar style of vehicle - and the fuel cell is expected to carry a 50 per cent price premium over petrol-powered models.