The QX30 is a mildly ruggedised version of the Q30 hatchback, but its comfortable ride can't make up for a poor engine and high price 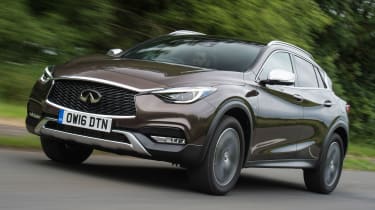 The Infiniti QX30 is the second small car from Infiniti, and it follows the template set out by the Q30 hatchback in that it uses the same running gear as the Mercedes A-Class. This crossover model, however, has some incredibly stiff opposition in the shape of the BMW X1, Mercedes GLA and Audi Q3.

It’s marked out from the standard Q30 by a ride height that has been raised by 55mm as well as extra body cladding on the wheel arches, front and rear bumpers. Chrome roof rails have also been added for extra visual effect.

Despite using the same chassis as the smaller Q30 hatch and Mercedes A-Class, the QX30 is only offered with a single drivetrain: a 168bhp 2.2-litre diesel with an automatic gearbox and four-wheel drive. 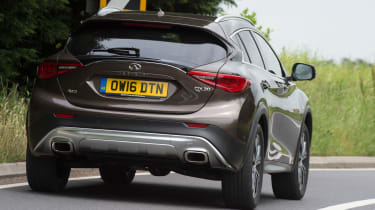 While Infiniti may have made the decision for you as to what engine will be under the bonnet, there is a choice of two trim levels: Premium and Premium Tech. The former costs £29,490 and the latter £33,370 – it’s a round £2,000 more than the Q30 hatchback model for model.

The Infiniti QX30 is a good-looking car, but it really should be considered more of a crossover family hatchback than a bona fide crossover SUV. Smaller dimensions than rivals such as the BMW X1 mean it isn’t as practical, while the fact there’s only one engine available also limits its appeal.

Still, the trend for fashionable jacked-up models such as the QX30 shows no sign of slowing down and the QX30 is in a decent position to reap some of the benefits. The Infiniti’s quirky looks, long list of standard equipment and neat cabin design will certainly catch the eye of potential buyers, but it’s worth noting that more talented rivals are around for similar cash.

Smooth and comfortable, but there’s only one diesel engine and that limits appeal

There is just one powertrain option in the QX30 – a 2.2-litre four-cylinder diesel engine with a seven-speed automatic gearbox and four-wheel drive. It’s essentially the same as the Mercedes GLA 220d 4MATIC, although its 168bhp is 9bhp down on the Merc.

Like the Mercedes, the Infiniti has plenty of engine noise outside, although decent sound deadening in the cabin means it’s fairly quiet. Acceleration is reasonable; Infiniti claims a 0-62mph sprint time of 8.5 seconds, which is on par with most rivals in the class.

The Infiniti features the same seven-speed gearbox as the GLA, but with only three modes to choose from, compared with five in the Mercedes. There are Eco, Sport and Manual options, with the last of these giving you full control of the box viathe steering wheel-mounted paddles. 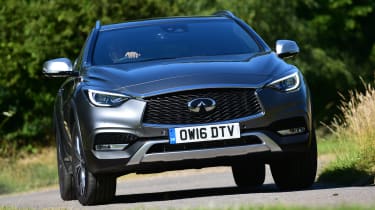 Eco mode delivers a dull throttle response to boost economy, but the Sport setting just holds on to the gears rather than sharpening its responses. The gearshifts themselves are smooth in standard mode and jerkier in Sport, although they’re never as severe as the Mercedes GLA’s shifts.

The soft nature of the QX30 is further evident in how the chassis copes with rough surfaces. While the soft suspension and tyres soak up bumps fairly well, the car does tend to bob around. This manifests itself with a floating sensation when cruising at motorway speeds, while the light steering doesn’t deliver much in the way of feedback. However, it’s no worse than the GLA in this regard, and is at least a fairly comfortable cruiser.

Body roll is reasonably well controlled in corners but again, the soft suspension does tend to unsettle the car at times. At least it remains safe and predictable.

Unlike the standard Q30 hatchback which is available with various turbocharged and lowered-powered diesel engines the QX30 only comes with one unit: a 168bhp 2.2-litre diesel.

It’s one of the biggest disadvantages with the Infiniti and immediately limits the appeal of this family car. The engine is a Mercedes unit and has been around for many years so there are no great surprises when you start it up. It’s quite noisy and unrefined, while the automatic gearbox and four-wheel drive system impact economy in a negative way.

Over 57mpg for a four-wheel drive QX30 is decent but the lack of more efficient versions may harm sales.

At over £33,000, the QX30 2.2d Premium Tech is rather pricey and around £2,000 more than an equivalent Q30. However, what we would recommend doing is opting for the QX30 Premium model and pocketing the near £4,000 difference. You still get most of the features that matter. 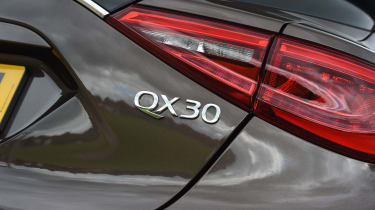 Insurance for the QX30 is rated in group 23. To give you some context, an equivalent Audi Q3 and Mercedes GLA are categorized in group 24 and 23 respectively.

Resale values of 46 per cent are reasonable for a car from a niche firm such as Infiniti. That means when you come to sell the QX30 in three years time with around 36,000 miles on the clock you can expect it to fetch around £15,000.

Infinitis are still rare on UK roads and the design language helps them to stand out even more. All of the brand’s cars feature sculpted lines and a big grille flanked by small headlights, and the QX30 is no different.

The QX30 shares its running gear with the Mercedes A-Class, but Infiniti has done a good job of hiding the car’s roots, because it has entirely different bodywork, although it is essentially a Q30 with a raised ride height and extra cladding. It sits 55mm higher than the hatch, but is the same length and width, so it’s more like a crossover hatch, especially when you compare it with the SUV-style X1. 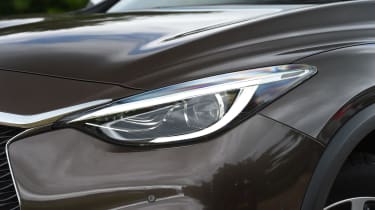 That’s not to say that the QX30 is without visual appeal, though. Far from it – the swooping lines are attractive, and it looks less awkward than the GLA. From some angles there’s a hint of Mazda 3 about the car’s design, although the black wheel arch extensions, silver roof rails and skid plates front and rear add a bit of ruggedness to the looks.

There’s a single 18-inch wheel option, but the tall tyres and plastic cladding of the QX30 mean they’re a little lost in the arches when compared with some of the larger wheels you can get on the Q30.

Climb aboard and the QX30 Premium has a high-class cabin that matches the Q30 Premium’s. There’s leather as standard, wood trim and plenty of kit, although that also means you get a lot of obviously Mercedes-sourced switchgear. 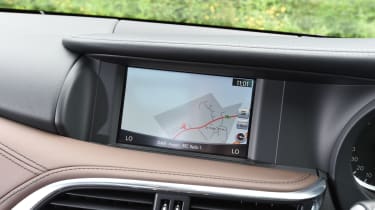 The sat-nav and infotainment system on the QX30 is operated via a swivel wheel on the centre console. It’s simple enough to use but the graphics on the screen do look a little low-rent and flat.

Build quality is good, and the leather-stitched dash insert adds a premium touch, but there are some hard plastics on the centre console and doors that let down the cabin. However, the QX30 is certainly no worse than the GLA in this regard.

Even though the QX30 uses the same platform as the GLA, its differing body shape means it is a little less practical. Its 430-litre boot is 51 litres smaller than the Mercedes’ and 75 litres down on the BMW X1’s.

Back seat space is similar to the Mercedes, as is the driving position, which provides the same range of seat and steering wheel adjustment. However, the raised footrest is awkwardly  positioned for those who have long legs.

The narrow back window and thick pillars make rear visibility poor, so it’s worth adding the £1,800 Safety Pack, which comes with a 360-degree camera.

The QX30 is 55mm taller than the Q30 but the length and width of both cars are identical. However, the more bulbous bodywork means the Infiniti is a little wider and longer than the Mercedes GLA, but that doesn’t equate to a more spacious interior. 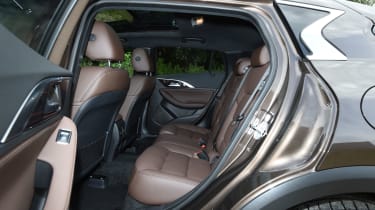 A consequence of the stylish but sloping roofline means passenger space in the back isn’t the best around. Adults taller than 6ft will feel their heads brushing against the roof, while the small rear window also makes it feel quiet claustrophobic 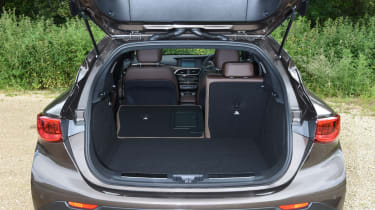 Despite the QX30 being more rugged and taller compared to the Q30, the 430-litre boot inside is exactly the same size. The relatively small opening and high boot lip don’t help matters and there’s no under-floor storage.

The QX30 has yet to be tested by the crash test experts at Euro NCAP, but its sister car, the Q30, has been and achieved a five-star rating.

The crossover has city braking, seven airbags and lane-departure warning as standard, while the £1,800 Safety Pack adds adaptive cruise control, park assist with 360-degree cameras and blind spot warning – although the warning lights for this are at the base of the windscreen pillars, a little way apart from the mirrors, which makes them tricky to spot. 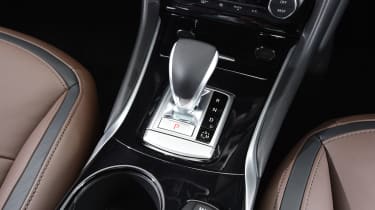 Infiniti’s dealer network has expanded to include 14 franchises. Although that’s still some way short of the BMW and Mercedes networks, Infiniti’s concierge-style service should set it apart. If your car has to be in the workshop for a service or any other work, the company will deliver a courtesy vehicle to your door. We’ll be interested to see how owners rate this when we get enough responses for the brandto rank in our Driver Power satisfaction survey.

An industry standard three-year, 60,000-mile warranty is included with every new QX30.

Like most new cars, Infiniti recommends you get the QX30 serviced every year or at 15,500 miles. And although there are only a few dealerships, Infiniti will collect and drop off your car if you get a service through a recognized dealership. 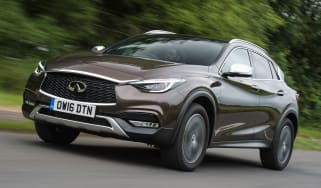 Infiniti wades into the crossover market, but is its first attempt at a chunky small car a winner?
Infiniti QX30 vs Mercedes GLA vs BMW X1 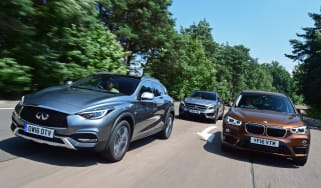 Can the bold new QX30 finally help give Infiniti the sales push bosses want? We find out as it meets BMW and Mercedes
New Infiniti QX30: UK prices and on sale date announced 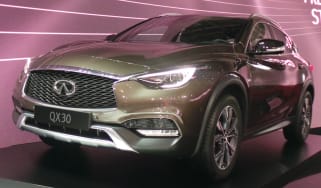 Infiniti's crossover version of Q30 hits showrooms in the summer priced from £29,490
Skip to HeaderSkip to Content