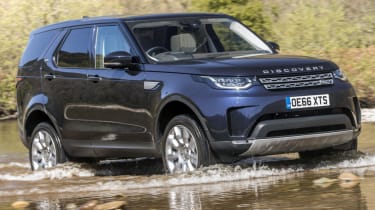 Jaguar Land Rover (JLR) is recalling more than 44,000 cars following news that 10 models may be emitting more CO2 than was initially recorded when they were certified.

According to the European Commission’s rapid alert system, a number of JLR models fitted with 2.0-litre petrol and diesel engines “may emit excessive levels of CO2 and may not conform with the certified condition”. The system gives a list of affected models, including the Jaguar XE, XF, E-Pace, F-Pace and F-Type, as well as the Land Rover Discovery, Discovery Sport and Range Rover Sport, Evoque and Velar.

The recall comes just weeks after the Land Rover Discovery TD6 actually outperformed a number of cars in independent real-world pollution tests thanks to its impressively low NOx emissions.

The problem was discovered by JLR and reviewed by the UK’s Vehicle Certification Agency. JLR then liaised with the DVSA (Driver and Vehicle Standards Agency), which handles recalls in the UK.

The repairs will be carried out for free and could include software updates or physical alterations. Some Range Rover Evoques will reportedly need new tyres.

In a statement, JLR said: “Affected vehicles are being rectified to ensure the correct CO2 performance is dependably achieved. The modifications made to affected vehicles will be made free of charge and every effort will be made to minimise inconvenience to the customer during the short time required for the work to be carried out.”

European car makers are being encouraged to reduce the average emissions of their ranges from 118.5g/km of CO2 to under 95g/km by 2021.

The news comes at a difficult time for JLR, with the British manufacturer reporting a record quarterly loss of £273m in February.

Do you drive a JLR vehicle? Let us know about it in our 2019 Driver Power survey...