We loved the Jaguar F-Pace SUV with the 4cyl diesel, but how does the punchier V6 fare? 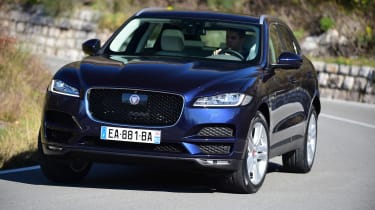 Frustratingly, this 3.0-litre V6 diesel engine is only available as a top-spec S model, meaning you’ll need to fork out more than £50,000 to get behind the wheel. It’s beautifully balanced, though, and the superior torque allows you to better exploit the F-Pace’s fine chassis. And while you’ll pay a hefty price up front, the admirable day-to-day costs should ensure this potent V6 isn’t much more expensive to run than the 2.0-litre.

Last week, we got our first on-road taste of Jaguar’s first-ever SUV. And we were so impressed by its performance, refinement and running costs that we awarded it a full five-star verdict.

On paper, the 3.0-litre diesel trumps the entry-level car in a straight line, covering 0-62mph in just 6.2 seconds (2.5 seconds up on the 2.0d). It’s even quicker than a Porsche Macan S Diesel, which completes the benchmark sprint one tenth slower. 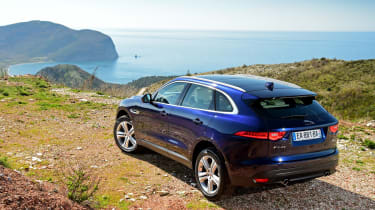 But that extra performance doesn’t come at the expense of fuel economy, with the faster F-Pace still claiming an impressive 47.1mpg and emitting 159g/km of CO2. That’s only 6mpg less and 20g/km more than the 2.0d – meaning this V6 shouldn’t cost a great deal extra to run.

The sting comes when you look at how much it’ll cost to buy. This 3.0-litre diesel is only available in top-spec S trim (as well as the now sold-out First Edition), meaning you’ll pay £51,450 for the extra 109bhp and 270Nm of torque.

That’s not only £11,090 pricier than the 2.0 R-Sport we tested last week, but a full £5,500 more than the Macan. Still, it makes the marginally larger and slightly faster £65,495 Porsche Cayenne S Diesel look really rather expensive.

You do get a host of additional kit for the V6 F-Pace’s extra outlay, though. On top of the R-Sport’s 19-inch alloys, xenon headlamps and eight-way electric leather seats, the S features bigger 20-inch wheels, keyless entry, adaptive dampers and an 11-speaker Meridian sound system. A handy reversing camera is also included. 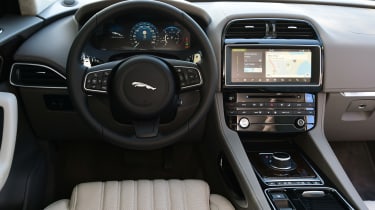 But it’s on the road where the 3.0-litre makes its case. The superior torque takes the Jag to a different dimension in terms of performance, and while the 2.0-litre will suit most buyers, those looking for an SUV with more poke are advised to test this V6 first.

It’s ideally suited to the F-Pace’s excellent driving dynamics, making light work of the 1,884kg kerbweight. The engine does feel slightly heavier over the nose, but not alarmingly so, allowing you to hustle the SUV down the road with an amusing amount of precision. It’s still good fun to drive, with everything backed up by the grippy all-wheel-drive system.

The V6 diesel builds on the high standard of refinement set by the four-cylinder unit, and appears quieter at a motorway cruise. The engine note is pleasingly fruity under hard acceleration as well, encouraging you to rev it to extract the car’s full performance.

Every V6 diesel gets the excellent eight-speed auto box, which switches gears with precision and speed. It offers a pleasing degree of involvement when you want to take control using the steering paddles, too. 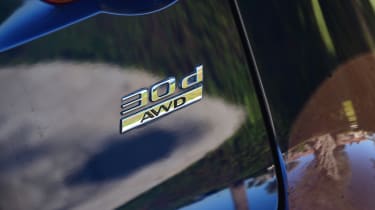 As in the 2.0-litre, the interior is beautifully crafted with high-grade materials and well damped switchgear. Our car came with the optional digital dials – part of the InControl Touch Pro pack, which also adds the larger 10.2-inch dash screen and 380W Meridian stereo. It costs £1,200, but significantly boosts the F-Pace’s cabin visually and is well worth the extra.

Elsewhere, you’ll find a decent 650-litre boot, which expands to 1,740 litres with the rear seats folded flat. Tie-down points come as standard, and could prove useful if you intend to regularly use the V6’s full 296bhp and 700Nm of torque.