The new Jaguar F-Pace will sell by the shed-load, and deservedly so. Rumour has it that engineers were forced back to the drawing board when the Porsche Macan launched in 2014 – and it’s blindingly obvious from behind the wheel. The Jag is firm yet comfortable, and beautifully controlled on a twisty road. It’s cleverly packaged, too, with a roomy cabin that offers practicality, luxury and simplicity in equal measure. It’s a shame it took so long for Jag to launch its first SUV, but the F-Pace proves it was well worth the wait.

The crossover market is growing faster than any other, with manufacturers offering niches within niches to satisfy buyers wanting something a little different. It’s a wonder, then, that it has taken Jaguar so long to make its first foray into this highly competitive sector. But the Jaguar F-Pace is finally here, so does it deliver?

In terms of size, the Jaguar sits between  the BMW X3 and X5, although engineers will freely admit that the Porsche Macan was a benchmark for the car’s dynamic ability. Jaguar also claims this new SUV  can take on the larger Cayenne in terms of space and everyday practicality.

On the road, the F-Pace’s sporting pedigree is clear, even in this entry-level diesel model. It takes all that is great about the smaller XE and XF saloons and neatly repackages it as a beefed-up SUV. The steering is razor-sharp and perfectly weighted, while the ride is nicely judged. It’s neither overly firm nor too soft, meaning you can push on without upsetting the balance of the car. Grip on our all-wheel-drive model was impressive, but bigger undulations did show the F-Pace’s added weight – although you never suffer sudden jolts through the cabin. 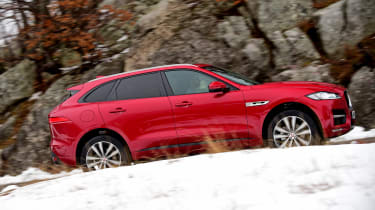 Body roll is well contained, too, offering just enough feedback to make the Jaguar great fun to drive on the right road without causing it to pitch and wallow through tighter bends. Take it off-road, and the ride isn’t as compromised as you’d think. Jag is leaving the proper rough stuff to sister company Land Rover, but the F-Pace isn’t scared of getting its boots muddy.

You can feel the all-wheel-drive system slightly scrabbling for grip on loose or slippery ground, but it’s well controlled and gives you confidence off the beaten track.

Back on the road and at higher speeds, the F-Pace remains refined, keeping all the best bits from the new Ingenium-engined XE and XF. Accelerate hard and the four-cylinder diesel makes itself known, but in everyday driving, the 2.0-litre has enough grunt to usher along the F-Pace’s more solid frame. It’s particularly composed at motorway speeds, where it settles nicely into a hushed and comfortable cruise. 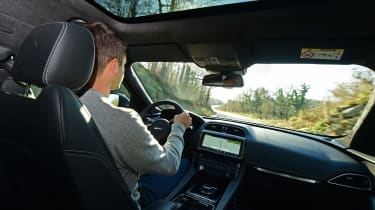 But it’s not the quickest car, and can’t compete with the Macan’s six-cylinder diesel engine. The entry-level F-Pace will dash from 0-62mph in a respectable 8.7 seconds, though, and carry on to almost 130mph. It won’t get your pulse racing, but select the right gear and there’s plenty of torque on tap for brisk progress.

If you want a bit more get up and go, then Jaguar has you covered, too. The 3.0-litre diesel V6 is a gem, and can accelerate from 0-62mph in 6.2 seconds – beating the Macan S in a straight-line sprint. The petrol F-Pace is faster still, lifting the supercharged 3.0-litre V6 from the F-Type sports car.

It brings a glorious soundtrack and does 0-62mph in just 5.5 seconds. That’s about as fast as you’ll ever need to go, but it’s almost a certainty that JLR’s new Special Vehicle Operations division will come  up with some ideas for the SUV, too. 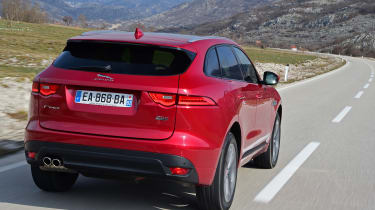 Company car drivers will be pleased to hear this entry-level F-Pace is available with both rear and four-wheel drive. The former will emit just 129g/km of CO2 with a six-speed manual gearbox, cutting the 4WD  car’s emissions by 5g/km. Fuel economy for our all-wheel-drive auto stands at 53.3mpg.

The sweet-shifting eight-speed ZF auto  is a perfect companion to each and every engine, too, changing ratios cleanly and smoothly. You can switch into Sport mode for faster shifts, which helps when you’re in the mood for more spirited driving. Drivers can also toggle through the Normal, Eco and Dynamic settings, as well as an all-weather mode for more slippery conditions.

UK buyers opting for the 2.0-litre diesel will get a choice of three trim levels. All come well equipped, with even the basic Prestige getting 18-inch wheels, eight-way electrically adjustable leather seats and Jag’s InControl sat-nav. Step up to the R-Sport, and you’ll benefit from bigger wheels, xenons, a more aggressive bodykit and gloss black details. 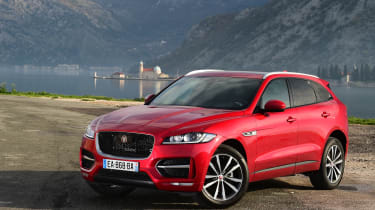 As with most Jaguars, a plush Portfolio model is also available, adding the full-length panoramic roof, rear view camera  and a 380W Meridian stereo. You can spec the more powerful diesel and petrol in range-topping S trim, which come with sportier finishes inside and out, plus subtle badging.

In the cabin, the F-Pace will feel very familiar to current XF and XJ owners, with a simple yet effective dash set-up, covered top-to-toe in luxurious leathers, metals and wood veneer. You’ll have to look hard for any sign of scratchy plastics, and the sumptuous leather seats are supportive and comfortable. 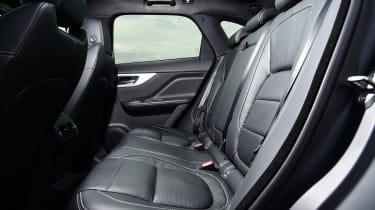 The optional 10.2-inch widescreen digital display is a big step on from JLR’s previous touchscreen efforts, and features the pinch-to-zoom functionality which makes it intuitive to use. Handy touches like the Wi-Fi hotspot add an extra layer of connectivity, although there’s no Apple CarPlay or Android Auto, which puts Jaguar behind the times. Still, the brand’s new wearable Activity Key will be a hit for those who play a lot of sport. The idea is you can secure your valuables – and key – inside the car, then use the wearable waterproof Active Key to lock and unlock it.

On the subject of practicality, Jaguar has done an excellent job of keeping the C-X17’s concept car lines for the F-Pace without sacrificing the SUV’s versatility. The 650-litre boot is a considerable 100 litres larger than an X3’s, while the F-Pace offers almost as much load space overall as cars in the class above with the 40:20:40 split seats folded flat. A total load area of 1,740 litres means it’s only 40 litres shy of a Cayenne. 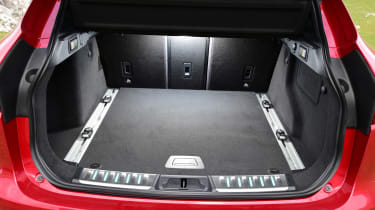 The optional panoramic roof compromises rear headroom slightly, but taller adults will have no complaints on longer journeys. Jaguar claims best-in-class knee room, too, and we see no reason to argue.

There’s considerably more space than you get in a Macan, and it’s not far short of large SUV rivals like the Mercedes GLE. There’s plenty of room to stretch out, while the large glasshouse offers a light, spacious view of the surroundings.