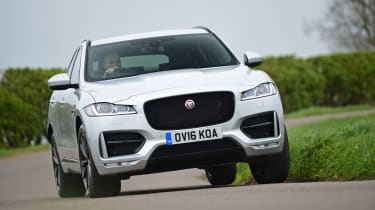 One area where the Jaguar F-Pace could do better is in terms of running costs. Initially, it appeared competitive against a host of established rivals. However, the arrival of WLTP testing has seen poorer fuel economy figures delivered across the board. Most cars come with an eight-speed auto gearbox and four-wheel drive, which explains some of the issue, although even the entry-level rear-drive manual doesn't have the best fuel figures.

Jaguar has WLTP figures of up to 44.5mpg for the rear-wheel-drive manual model, which is the best you'll get across the entire range. It also emits 166g/km of CO2, while upgrading to 20-inch wheels will see less-efficient numbers.

The biggest seller is Jag’s Land Rover-fighting all-wheel-drive version, complete with an eight-speed automatic gearbox. CO2 emissions start from 182g/km, while fuel economy falls accordingly, starting from 40.8mpg. The fastest four-cylinder diesel gets 237bhp and has a best of 39.6mpg under WLTP testing, while emitting 187g/km of CO2. The V6 diesel is faster but thirstier, with a combined best of 37.0mpg and increased emissions of 200g/km. Again, adding larger wheels to any of these cars sees fuel economy and emissions take a turn for the worse. 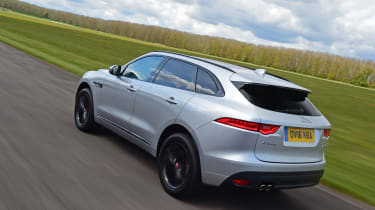 If you prefer petrol power, the 2.0-litre four-cylinder returns up to 29.8mpg in 247bhp guise, while the 297bhp version manages 28.7mpg under WLTP testing. Emissions for both of these engines is 215g/km and 223g/km, respectively.

At the very top of the range, the SVR has an on-paper best of 22.7mpg and emissions of 281g/km. That's pretty poor by anyone's standard, but at least you're more likely to achieve this economy figure in everyday driving than you would if it was an NEDC test figure.

In terms of insurance, the F-Pace is comparable with most of its main rivals. The entry-level car sits in group 29 out of 50, as does BMW's X3 in base SE trim. The Volvo XC60 2.0 D4 Momentum is slightly higher at group 32, while an Audi Q5 in basic 2.0-litre TDI SE guise starts at group 27. The Porsche Macan range begins at group 41.

As well as boasting low day-to-day running costs, the F-Pace looks like a solid long-term prospect, too. Early on, the entry-level diesels retained more than 50 per cent of their value after three-years or 36,000 miles, with the all-wheel drive R-Sport Auto holding onto almost 54 per cent over the same mileage and time frame.

Today, the F-Pace's appeal has waned a little, and residuals have taken a bit of a hit as a result. While lower-spec cars are still above the 50 per cent threshold, it's only just, with the F-Pace offering a retained value ranging from 43-53 per cent. At the top of the range, the SVR is the best performer, demonstrating that the novelty of a V8 super SUV still holds appeal with buyers.