That stunning bodywork wraps up a cosseting interior, and the F-Type is full of neat and elegant touches 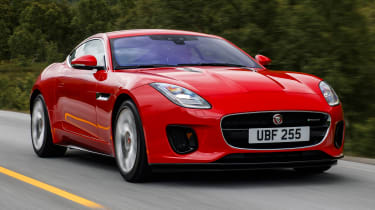 The F-Type looks dramatic enough to be a worthy modern incarnation of the show-stopping Jaguar E-Type. The short tail and slim rear lights hint at its predecessor, but at the same time its lines are finely detailed and completely modern.

The car also looks perfectly in proportion from almost any angle. Desirability is almost as important as performance and handling in this class, and the F-Type has both in abundance. The soft-top is particularly elegant: its tight lines work perfectly with the body design, and it folds down electrically in just 12 seconds. 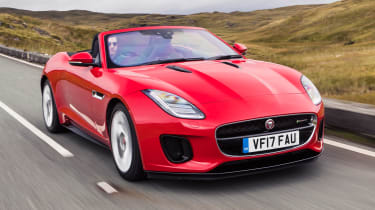 The F-Type P340 3.0 V6 and P380 3.0 V6 have 18-inch and 19-inch alloy wheels respectively as standard, plus a neat twin central-exit exhaust, while the V8 R looks even bolder, thanks to its larger 20-inch wheels and quad exhausts. Four-wheel-drive cars are marked out by a bigger power bulge on the bonnet and new air vents, while a Sport Design Pack beefs up the styling – it’s standard on the R, and optional on the other models.

Climb inside, and the drama continues. For starters, the pop-out door handles add a sense of occasion; then, when you press the starter button, the air vents rise from the top of the driver-focused dash. The joystick-style gearlever and toggle switches all feel special, while all versions get leather trim as standard.

Jaguar has taken a leaf out of the Porsche book by putting many of the most desirable features on the options list. Comfort items such as heated seats and a wind deflector will cost you extra. 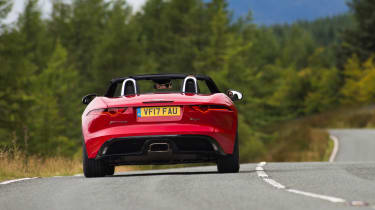 Sat-nav and Bluetooth connectivity are standard on all models, and the revised eight-inch touchscreen system in the F-Type is far better than previous Jaguar efforts – although it’s still not up to BMW and Audi standards of usability.

Jaguar’s InControl Remote system provides useful added functionality, too, with features that allow you to monitor fuel level, remotely pre-heat or cool the car, or lock and unlock it. Other InControl apps connect your smartphone with the touchscreen so you can access maps, contacts and calendar functions, as well as your music.

The standard Jaguar sound system features six speakers with 180 Watts of power, but you can upgrade to two Meridian packages developed for the F-Type, with 10 speakers and 380 Watts or 12 speakers and 770 Watts respectively.