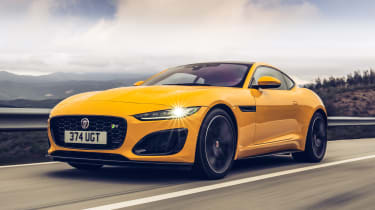 No matter what version of the F-Type you choose, you'll be rewarded with a superb driving experience. As it was developed as a convertible from the outset, there's very little twisting or vibration through the bodyshell, and body control in corners is excellent. But, it’s the new chassis modifications and improvements to the steering, in particular, that now define the F-Type.

Enhancing things further is plenty of strong grip, along with 50:50 weight distribution and either rear- or four-wheel drive. It all adds up to an extremely involving and agile car.

The overall result is still not quite as poised as a Porsche Boxster or Cayman, but the F-Type is an amazing car to drive nonetheless. What's different is that it blends superbly engaging performance with the sort of supple ride that makes cruising a pleasure. German rivals tend to adopt a more firmly sprung approach, which sometimes jars on Britain’s mixed bag of surfaces.

Four-wheel-drive cars are a real thrill. They feature an active system that generally sends only 30 per cent of torque to the front wheels, but feeds more in as the rear wheels lose traction. You don’t notice the added weight, and most of the time the car feels like it’s rear-wheel drive, but the extra grip and quick-witted 4WD system add to the fun, and the levels of grip are phenomenal. 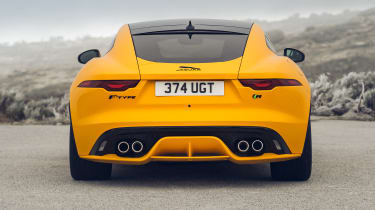 The 2.0-litre four-cylinder engine is turbocharged, while the F-Type V8 versions basically use a re-map of the limited-run XE Project 8’s supercharged 5.0-litre unit.

The F-Type R, with its 5.0-litre V8, is only available with an automatic gearbox. In the coupe, it dispatches the 0-60mph sprint in 3.5 seconds and hits a top speed of 186mph.