Lapping an abandoned F1 race track in a Jaguar XE 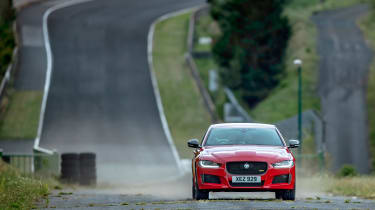 Grand Prix racing was very different back in the 1960s and 70s compared to the multi-billion pound techno-fest that is contemporary Formula One. The drivers mostly had long hair and sideburns, and often used to stay out until the small hours the night before a race. The cars themselves were covered in adverts for cigarettes and alcohol. And the circuits they raced on tended to be longer and faster than the ones they use today, and were nowhere near as safe as a result.

One such circuit lay in the middle of France, and was known simply as Clermont Ferrand. Designed in the late 1950s by French racing driver Louis Rosier, the circuit at Clermont Ferrand – also known locally as the Circuit de Charade – opened in 1958 and hosted the French F1 GP four times until 1972, and the French motorcycle GP no fewer than 10 times.

It was regarded by the motor sport press of the time as being “the perfect antithesis to the high-speed GP circuit at Monza” because its mixture of tight corners, fast straights and extreme undulations would “very quickly demonstrate – or expose – a driver’s skill.”

For starters, the circuit was built on pre-existing roads that encircled a once-live Volcano called the Puy de Dome, so the topography was unusual by its very nature. The lap was also a whisker over five miles long, which meant certain sections of it were literally hundreds of feet higher than others. So much so that in the practice sessions for the French GP in 1969, Jochen Rindt – who went on to win the F1 World Championship posthumously in 1970 – claimed he was suffering from motion sickness. So he opted to wear an open face helmet during the race, just in case.

In 1972, however, Clermont Ferrand hosted its final French Grand Prix. It was won by Chris Amon driving a Matra MS120 at an average speed of 104mph, and his lap record of 2min 53.9sec still stands to this day. Or at least it did until Jaguar turned up there a week or two back, with a small army of local policemen and fire crew in tow, a pair of XE Sport 300s and a man from Belgium called Vincent, whose brief was to see how close to the lap record he could get.

Vincent, as in ex-BTCC ace Vincent Radermecker, is the same chap who set the new saloon road car lap record around the Nurburgring last year, so he knows a thing or two about driving saloon cars fast around scary circuits. But this one was always going to be a bit different, mainly because nowadays, two-thirds of the circuit is made up of public roads, hence the army of police present – available for one day only – to help marshal the circuit. 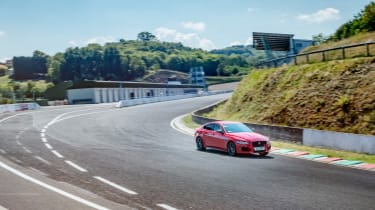 Jaguar has made a film about Vincent’s exploits, naturally, and it was the making of this film that I was invited along to watch. At the same time, however, I got to have my own go around the famous old GP circuit, in the exact same XE 300 Sport that Vincent drove, and let me tell you it was some day out.

To begin with there was lot of arm waving and a fair bit of Gallic head shaking, mainly because the local Mayor turned up on the morning of filming, entirely unannounced, having just got back from his Grand Vacances. And he wanted to know why the road to his golf club had been closed. Which sent the Jaguar crew into something of a flat-spin.

After some gentle explanation by Jag’s local “fixer” and possibly the parting with of yet more euros, the roads were closed eventually – which required more than 60 marshals and Gendarmes, most of whom, to be fair, were right on side – and then we were on.

I went first, followed by Vincent about 30sec later. The night before we’d both done some low-speed sighting runs but, even so, I still wasn’t sure which way the road went at some points. Which is reasonably concerning when you begin howling through villages at over 110mph, on a road you don’t really know, and that road then suddenly ducks left, then right, then left again through a forest, where there are 300 foot drops to one side. 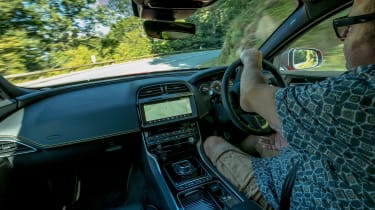 It’s a proper roller coaster ride, is Clermont Ferrand, and that’s just the public road section. To link this to the much shorter but even more undulating section of proper race track that still exists today, you have to go through what feels like someone’s back yard – but that’s exactly the route taken by the original circuit all those years ago, so it’s the exact route I take in the XE 300 Sport. Even when it gets airborne momentarily going from road section to track.

By the end of the lap the XE’s brakes are smoking; it’s clear that this crazy, up and down race track is mega heavy on brakes. But otherwise the XE is surprisingly at home during the lap. It feels planted, grippy, decently quick, and just a good thing to be doing this kind of stunt in basically, even if it isn’t ballistically fast.

But even in Vincent’s more capable hands, the XE 300 Sport is absolutely nowhere beside that old F1 time from 1972. In the end, and after a few attempts, Vincent manages a lap of 4min 09sec, and that now stands as the new (and almost certainly permanent) road car lap record for the original Clermont Ferrand GP circuit.

But it’s still over 70 seconds slower than those F1 cars used to manage, almost half a century ago.

There’s only one word to describe what they did in those unbelievably dangerous cars, on tracks as treacherous as this, all those years ago, sometimes wearing open-face helmets: brave. And therefore respect is very much due.

For another Jaguar feature, take a read of when we visited the Jaguar Land Rover Classic Works site in Ryton, Coventry.