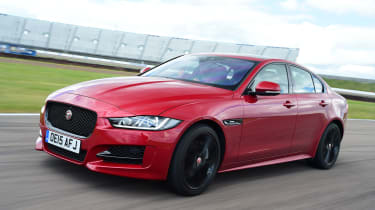 The entry-level 2.0-litre petrol is easily overlooked in the Jaguar XE range. Whereas the new Jaguar-made 2.0-litre diesels grab the limelight thanks to their eco credentials, it’s a shame the 2.0 petrol isn’t as impressive as it could be. Poor mpg and CO2 figures mean it’ll continue to be passed over by most people. Still, it’ll be liked by some more traditional private buyers, and it brings the entry-level price down to £26,990.

Jaguar seems to be on a roll at the moment, especially as the XE bagged the Best Compact Executive Car trophy at our New Car Awards 2015.

However, while in recent months we’ve given the thumbs-up to the eco diesels and thumping F-Type-engined S model that bookend the XE line-up, the middle-of-the-range petrol model has thus far escaped the spotlight. So what’s it like? 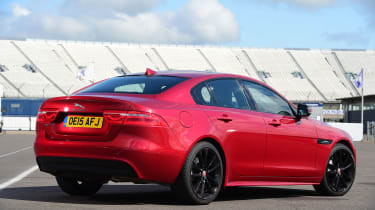 At £26,990, the 2.0-litre four-cylinder petrol turbo is the entry point to XE ownership. And while the Ingenium diesels and supercharged 3.0-litre V6 are built with great pride by Jaguar, the humble 2.0-litre is a hangover from the days when the company was owned by Ford.

It’s available with 197bhp or 236bhp, and both versions claim fuel economy of 37.7mpg and CO2 emissions of 179g/km. An eight-speed automatic is the only box it can be paired with. 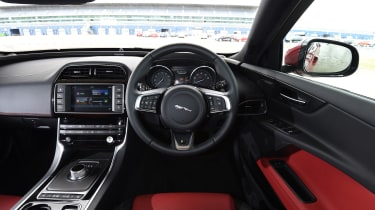 On the road, the bad news continues. To try to make the 197bhp 2.0 as kind as possible to the environment and your wallet – despite setting off on the wrong foot – the normally smooth-shifting eight-speed auto is a little reluctant to kick down to aid overtaking.

It wants to stay in the highest possible ratio to improve your already disappointing fuel consumption expectations. Because of this, the engine feels a little held back, consequently making it a little infuriating to drive. 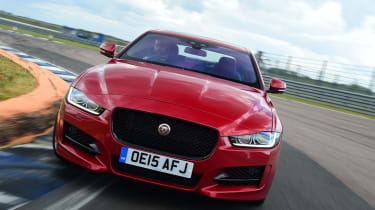 Undoubtedly the new, more flexible 2.0-litre diesels will be the obvious choice for most buyers. That said, the four-cylinder petrol is quiet on the motorway and roars pleasantly when the box finally kicks down.

Fortunately, the rest of the package makes you smile. As with all other versions of the XE, it steers crisply and body roll is well checked – especially with the R-Sport’s stiffened suspension.