Eco 2.0-litre Jaguar XE diesel is the key model in range – and it delivers brilliantly 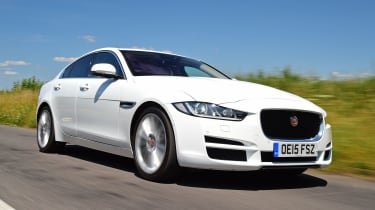 After the unhappy memory of the X-Type, Jaguar is finally a true force to be reckoned with in the compact executive class. This 2.0-litre diesel ticks all the boxes you could want in terms of efficiency, and significantly, it’s great to drive, too. The XE hasn’t just matched the class leaders, it’s surpassed them – and for that reason it’s our pick and a worthy award winner.

Success in the car industry largely comes down to experience, and in the compact executive saloon market Jaguar doesn’t have the pedigree to match rivals such as BMW, Mercedes and Audi.

The Mondeo-based X-Type was the brand’s first attempt, but it wasn’t universally popular and is remembered for all the wrong reasons. Fast-forward six years since it was discontinued, and we arrive at the XE – the company’s more convincing attempt at dethroning the 3 Series, C-Class and A4.

We’ve been behind the wheel before, of course. Pre-production models driven in Portugal showed class-leading promise, and the finished article in Spain proved that Jaguar really had come up with an answer to the German elite. 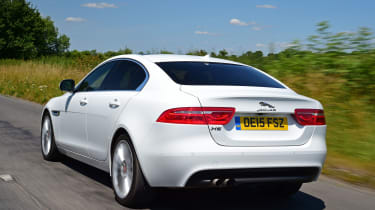 The car impressed to such a level that it took the Best Compact Executive Car crown at the Auto Express Awards earlier this month, and the 177bhp 2.0-litre Ingenium diesel – tested here in the UK for the first time – is the very reason why.

Jag’s relentless advertising campaigns and lavish PR stunts have made the XE hard to ignore, yet the resources and technology it’s poured into its small saloon make the car worthy of your attention on its own.

A new family of Ingenium diesels, new aluminium architecture and state-of-the-art factories are the headlines, but for customers the numbers look just as appealing. Prices starting from £26,990 and CO2 emissions as low as 99g/km mean cost-conscious company car drivers are catered for. Meanwhile, strong predicted residuals of up to 45 per cent and economy as high as 75mpg could be a deciding factor for private buyers. 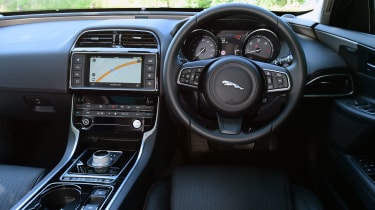 Where the XE shines most brightly, though, is from behind the wheel. The first thing you notice is how low you sit, with the 14-way seat adjustment allowing a driver of any size to tailor the driving position to their exact requirements.

Jaguar has played a neat trick in lifting the height of the centre console, exaggerating the low-slung driving position which immediately gives you the sensation that the cabin is wrapping around you. The architecture is beautifully crafted, but Audi’s new A4 takes ergonomics, detail and quality to the next level, while Jag’s new infotainment system already looks clunky.

A jab at the starter button sees the gear selector elegantly rise from the centre console, and the engine shudder into life. This is the motor that really matters, despite the appeal of the 3.0-litre supercharged V6 from the F-Type. This is the higher powered of Jag’s two new Ingenium diesels, producing 177bhp – but at only £500 more than the 161bhp version, you gain a lot for very little. 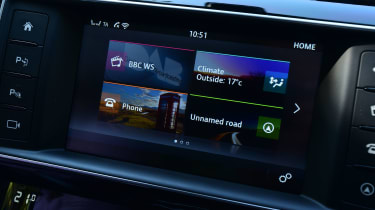 There’s no impact on fuel economy, and only performance gains to report; 0-62mph at 7.8 seconds knocks nearly half-a-second off the 161bhp model’s time thanks to an additional 50Nm of torque. For rock-bottom running costs you’ll need to go for the six-speed manual, but boasting more than 67mpg and emissions of 109g/km, the auto will give the Germans a headache, too.

The eight-speed ZF auto costs £1,750, yet paired with the quiet and refined 2.0-litre diesel it’s the perfect partnership. Power is fed to the rear wheels smoothly and predictably, in a way that no current four-cylinder diesel can manage.

Such is the sense of calmness that the XE never really transmits a sense of speed – the engine remains muted once warmed up, although the fire-up process of the stop-start system gives quite a shiver. Press on and the XE stays unflustered, relying on its broad slug of torque to maintain momentum, pulling an indicated 1,600rpm at 70mph. 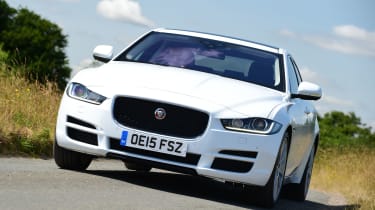 The weight-saving measures Jag implemented in the XE allowed engineers to fit the F-Type’s more sophisticated double-wishbone front suspension and a clever integral rear link set-up. Combine that with the fact the XE was developed on UK roads, and its fluid and floaty nature comes as no surprise.

The larger 19-inch alloys will sniff out deep road imperfections, but on the whole it’s beautifully resolved – even when you toggle the adaptive dampers to Dynamic.

That set-up also adds steering weight. The XE is the first Jag to feature an electrically operated rack, but the vagueness and sense of detachment you feel in the C-Class and, to an extent, the 3 Series aren’t apparent. 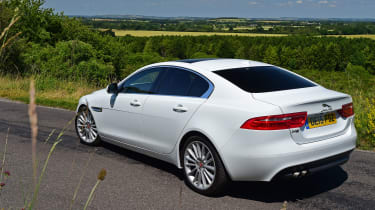 It’s incredibly direct and uncoils naturally once you’ve applied lock, instilling the car with a sense of agility that makes it feel light on its toes. If the XE feels this good with a 2.0-litre diesel up front, we can’t wait until the SVO division ups the ante.

Back inside, when you’re not unlocking the XE’s sporty character you can begin to enjoy the finer details. The seats are highly comfortable – providing sufficient support but enough freedom to move around – while the superb Meridian sound system is an ideal companion for long motorway cruises. 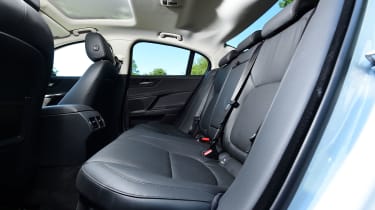 If there’s one disappointment, it’s in the back. That sloping, coupé-like profile may look great, but it does impact rear space. Any passengers taller then six feet may find themselves short of headroom, which isn’t a problem in either the BMW or Mercedes.

The Jag can’t compete with the Germans on boot space, either – all three offer 480 litres compared to 455. But it’s no deal-breaker when you consider the XE excels in virtually every other aspect.