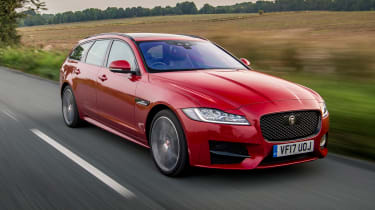 Those not taken with the idea of a Jaguar SUV will find solace in the XF Sportbrake, which mixes space, pace and practicality. It suffers the same shortfalls as the regular XF – a dated interior and iffy infotainment – but makes up for this with sharp handling and a comfortable ride. Entry-level diesels offer almost as much poke, while costing less to run.

In just 12 months, Jaguar’s SUV range has expanded from zero models to three – with the F-Pace selling well, the E-Pace on the way and the all-electric I-Pace SUV already causing quite a stir.

However, despite claiming they’d never build another estate car, the brand’s engineers, designers and marketeers have generated a business case for this: the second-generation XF Sportbrake.

It’s based on the existing XF saloon, and costs an average of £2,400 more across the range. The Sportbrake is designed to offer a practical and versatile alternative to those not sold on an F-Pace. 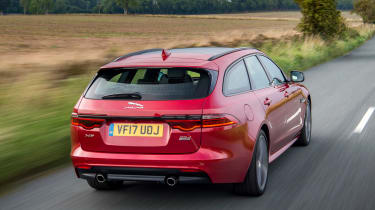 From the front it looks like any XF, with a sharp nose and prominent grille. In fact, the cars are identical until you reach the B-pillar; where the saloon’s roofline tails off, the Sportbrake’s stays high and continues past the C-pillar to reveal a boxy-yet-sleek shape not dissimilar to its predecessor’s. The F-Type-inspired rear lights have been adapted for the estate, too.

As with any estate car, the most important consideration is space. The new XF Sportbrake has a 565-litre boot with the seats in place and 1,700 litres when the rear bench is folded flat. And the word ‘flat’ is key here; the roomy Jag offers a totally flush load bay, making it simple to slide longer items into the back.

Those numbers mean that the new XF Sportbrake matches the BMW 5 Series Touring for outright space, although as ever, the Mercedes E-Class is bigger. 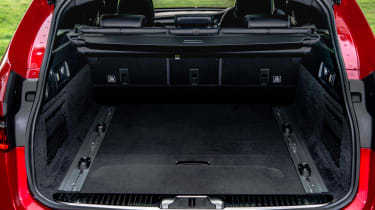 Jaguar design studio director Wayne Burgess told us that it’s much easier to design a wagon from the outset than to adapt a saloon shape to fit; it’s an issue both he and design boss Ian Callum faced with the previous-generation car.

As a result, the new Sportbrake is sleek, stylish and practical, offering plenty of leg and headroom in the rear. Handy features such as the electric tailgate, tie-down points and luggage nets in the boot make this Jag more practical than ever before.

It’s business as usual up front, with the same well built (if uninspiring) cockpit and dated infotainment screen. The XF still trails its rivals when it comes to tech functionality, and with no Apple CarPlay or Android Auto connectivity, those who regularly use their smartphones will find the Jag frustrating. Still, there are few scratchy plastics, and the (£1,125) panoramic roof looks great.

So has the transition from limo to load-lugger harmed the XF’s fine driving dynamics? In short, no. The Sportbrake weighs around 115kg more than the saloon, but you’d be hard pressed to notice the difference in normal driving.

All cars come with self-levelling air suspension at the rear, while our model’s adaptive dampers worked well, too, offering a cushioned ride even though it was fitted with large 20-inch alloy wheels. Flick the suspension from Normal to Dynamic mode and the car fidgets around a little more, but it rarely feels too firm.

Our car featured the mid-range 237bhp 2.0-litre diesel, linked to Jaguar’s all-wheel-drive system and standard-fit eight-speed ZF gearbox. It feels pretty much as punchy here as it does in the saloon (0-62mph takes 6.7 seconds versus 6.5 seconds in the four-door), while the transmission swaps cogs smoothly. There’s no V6 petrol for the time being, but that may change. 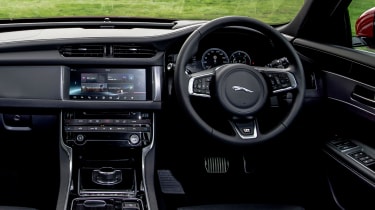 Opt for this 25d diesel version and you’ll pay the price when it comes to fuel economy and emissions. Our Sportbrake should return 48.7mpg, while a rear-wheel-drive 20d version will deliver closer to 60mpg. The BMW 5 Series Touring is more efficient across the board, however, and the same applies when considering company car tax.

At least the XF gets a decent amount of kit. All cars from the entry-level Prestige to the range-topping First Edition come with sat-nav, climate control and a powered tailgate, while top-spec models feature keyless entry and special ‘Windsor’ leather trim. R-Sport versions offer the best spec compromise, however, with plusher seats, more aggressive bumpers and xenon lights.