Jaguar's XF is a very capable and stylish executive saloon that's great to drive, but it's starting to feel its age a bit 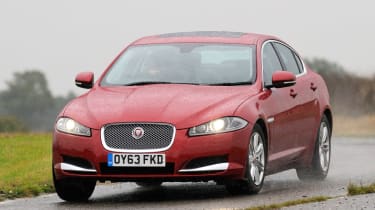 There's no doubt that the BMW 5 Series, Mercedes E-Class and Audi A6 have been the dominant force in the executive car class for decades, but the Jaguar XF was the first car that established itself as a serious, lasting contender.

The British-built XF first appeared in 2007, and brought with it a a winning combination of classy, distinctive styling, powerful and refined engines, a premium-feeling interior and great driving dynamics. It's also got that unmistakeable 'Jag' character that is missing from the German trio.

Jaguar has kept the XF fresh over the years with two facelifts, introduced a Sportbrake estate and offered new engines to keep it punching hard in the all-important company car sector. The car forms the bulk of Jaguar’s UK sales and 2014 was the XF’s strongest year for registrations and helped the British marque to record its best sales figures for nearly a decade.

But a replacement is on the horizon, and with that in mind Jaguar has slimmed down the range and deleted certain engines and trims, but at the same time has added more value for money as well. There are seven models: Luxury, R-Sport, R-Sport Black, Portfolio, Diesel S Portfolio and the high-performance XFR and XFR-S models. Even Luxury models come complete with heated seats, a heated windscreen plus front and rear parking sensors.

Apart from the 5.0-litre supercharged V8 XFR and XFR-S super saloons, the range is now exclusively diesel. XF saloons and Sportbrakes are powered by a 2.2-litre four-cylinder engine with either 161bhp or 197bhp and a 271bhp 3.0-litre V6.

The Jaguar XF is poised and agile when on a twisty country road, and the steering is quick and well weighted too. There’s plenty of grip, but the XF isn't quite as controlled as the latest BMW 5 Series – although it’s well balanced and has good feedback through the wheel. The standard eight-speed automatic gearbox is responsive and smooth.

Unfortunately the low-speed ride is fidgety and uncomfortable, but comfort improves the faster you go, while wind and road noise are well isolated. The BMW 5 Series or Mercedes E-Class are quieter on the motorway, but the XF still cruises effortlessly. The 2.2-litre diesel is a bit gruff - but it is still a good engine and is nicely isolated from the cabin.

This unit comes in 161bhp and 197bhp guises, and while it isn't quite as punchy as the 3.0-litre V6 diesel, it still has loads of torque and is actually surprisingly rapid. The 197bhp version will do 0-62mph in 8.5 seconds. It’s definitely the pick of the line-up.

The XFR's supercharged 5.0-litre V8 is another level of performance and the exhausts roar with a touch of the throttle. It's an engine with great character and is fiercely quick in isolation, but more powerful turbocharged rivals such as the latest BMW M5 have upped the game since.

With a new stop-start system and a few tweaks to the 2.2-litre diesel, CO2 emissions were recently cut from 135g/km to 129g/km, and economy is up to 57.7mpg. That means the Jag matches SE versions of the BMW 520d and Mercedes E220 on company car tax. It's exempt from road tax for the first year of ownership, with an annual bill of £105 thereafter. It also keeps BIK rates to a low 19 per cent – and puts the XF on a par with the Audi A6 2.0 TDI.

Servicing won't be the cheapest, but owners have reported high satisfaction with the service - so it appears you get what you pay for with the Jaguar. Standard equipment is good - all models get climate control, Xenon headlights, cruise control and sat-nav.

Jaguar generally offers a range of finance deals on XF models, too, so check its website for the latest hire purchase and lease promotions. For an executive saloon, the XF’s residual value predictions are reasonable, too.

Age has been kind to the XF, and it still manages to cut a dash after seven years in production. The 2011 facelift tightened up the looks, with smart LED daytime running lights up front and a tweak to the rear end. Sportbrakes add more drama with a curvy rear-end and blacked-out B- and C-pillars.

Just like Audi offers S line models or BMW has its M Sport variants, Jaguar will sell you an XF R-Sport. It adds a subtle bootlid spoiler, a Sport front bumper and a set of 17-inch or 19-inch alloy wheels depending on your engine choice. There are a few R-Sport badges added to the interior, too.

Inside, the Jag feels every inch the luxury executive saloon. The plush leather seats are very comfortable, and while the silver metal finish for the dash looks a little dated, it can’t be faulted for quality. Another common complaint is with the sat-nav. The spindly graphics and basic colours are looking quite old these days, and could do with an update.

Elsewhere, the opening air vents and rising rotary gear selector still add a touch of drama every time you start the XF, while the wood trim on the centre console has a classy feel and adds a special touch.

The Jaguar XFR and XFR-S models get aggressive bodykits to dial up the sportiness of the XF's shape, and the XFR-S also gets a huge rear wing to make it look even more like a racing car.

The seats and steering wheel are electrically adjusted, so getting the driving position right is no problem in the XF. The touchscreen display is quite clunky, however, and it can be hard to access the features you want quickly.

The centre console features two cup-holders, a tray and a large armrest that hides a deep bin containing USB and 12V sockets. 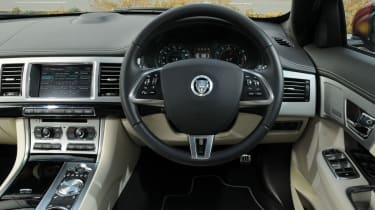 The sloping roofline means the rear headroom isn't great, and visibility is reduced as well - but some buyers won't mind the complaints when the car looks this good. There's only space for two in the back on any sort of long journey, thanks to the large transmission tunnel.

The Jaguar’s boot has a 500-litre capacity, with split-folding back seats boosting this, although these can only be released from within the passenger compartment. Access to the boot is a bit narrow, but the boot hinges don’t cut into load space, and there’s a large floor area.

The XF has been a consistent top-five performer in our Driver Power satisfaction surveys since it debuted in first place in 2009, although in 2013, one of its poorest scores came in the reliability category.

However, most issues flagged up by owners seem to be electrical, and have been easily addressed with software updates at each service. And as the car has been on sale since 2008, most electrical gremlins should be ironed out by now.Unfortunately the Jaguar only achieved a four-star rating in Euro NCAP crash tests, and picked up lower than average scores for child occupant protection and advanced safety kit.