Our verdict on the Jaguar XF, which is now available with the firm's supercharged V6 petrol engine 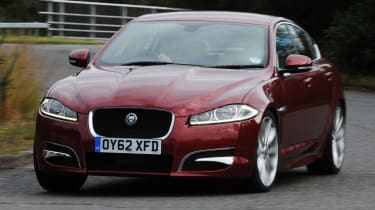 No matter how good this engine is, it won’t sell as well as the diesels in the UK. But it’s hard not to be impressed. The new V6 offers a brilliantly smooth and powerful drive. It can’t replace the deep-chested rumble of the old V8, nor the emissions performance of the diesel V6, but for keen drivers who need the extra space of an XF, the new engine hits the mark. And that bodes well for the F-Type, too.

It’s nearly two years since Jaguar facelifted the XF, but the main focus with this latest 2013 model year update is what’s under the bonnet.

Gone is the old naturally aspirated 5.0-litre V8, and in its place is Jaguar’s new 3.0-litre supercharged V6, which will also find a home in the XJ saloon and imminent F-Type roadster.

The new engine uses the same basic building blocks as the V8, but with two fewer cylinders and a Roots-type supercharger. Power is actually down, from 380bhp to 335bhp, as is torque (450Nm compared to 515Nm in the V8), but crucially fuel efficiency has been increased from 25.4mpg to 30.0mpg, while CO2 emissions fall from 264g/km to 224g/km.

As with all new Jags sold in the UK, the 2013 XF driven here gets an eight-speed automatic gearbox as standard, as well as stop-start.

The new engine doesn’t fire up with the same characteristic roar as the old V8, but still makes itself heard before settling down to a barely audible idle. Turn the rotary dial right to D, press the throttle and the Jag moves off with impressive smoothness. Light but accurate steering is perfect for low-speed manoeuvres, while the gearbox shuffles through its ratios quickly and effortlessly.

Around town, the only things to upset the relaxing ambience are a slight wobble as the stop-start system cuts and restarts the engine, plus a bit of a gap in power as the gearbox changes up. Both of these issues have been ironed out in the XF’s key rivals from Mercedes and Audi.

However, they ensure you remain connected to, rather than isolated from, the driving experience, which only gets better as the speed builds. You sit nice and low in the XF, allowing you to have a decent feel of what the car is doing. This is really useful because the V6 has no problem overwhelming the rear wheels, despite the reduction in power.

Once you reach around 3,000rpm, the building engine noise is overscored by a shrill whine from the supercharger, and at 4,000rpm, the V6 emits a more metallic rasp. In the XF it’s impressive, but with a shorter, louder sports exhaust, it should sound superb in the F-Type.

When you’re cruising, the only noise is from the wide tyres, which roar on motorways. But this is easily drowned out by the 825W 17-speaker Meridian stereo, which replaces the Bowers and Wilkins system, now used by Maserati.

The engine is very flexible – no more than a touch of the right foot is required to overtake slower traffic. Throttle response is good and the box is quick to kick down. The brakes also make easy work of the XF’s 1,770kg kerbweight, which again bodes very well for the 1,597kg F-Type.

The only real problem with the new V6 is the diesel V6 offered elsewhere in the range. Even the higher-powered XF Diesel S is £4,345 cheaper than the petrol V6, which is only available in Premium Luxury spec or above. It’s a bit slower from 0-62mph, but trumps the petrol car with 600Nm of torque for an effortless drive.

So while this new V6 won’t be a common sight on UK roads, it should be a hit in petrol-driven markets like Russia and the US.