The Kia is fantastic value and a massive step forward from the car it replaces, making it a serious contender in the compact MPV sector. 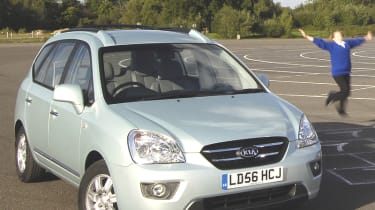 Driving: Kia expects the 2.0-litre diesel to sell best, so luckily, it marks a major improvement on the old car. Coarse on start-up, excellent soundproofing means that only extreme acceleration provokes noticeable clatter once on the move. The unit is flexible and responsive, and the Kia proves zippy through the gears. Its pace is, however, hampered by a slightly slack gearbox. Still, the Carens rides well. It soft suspension soaks up potholes and is cosseting on motorways. Yet on twisty roads it falls back. There is too much body roll and it loses composure. Through bends it feels unsettled - the steering is vague and doesn't inspire confidence. And the foot-operated parking brake is an irritating quirk on a manual-gearbox car.

Marketplace: Stepping from the previous generation Carens into the new model, it's clear how far Kia has come with the quality of its cars. The styling has also evolved, with a much more European look. Yet the side profile is unflattering, making the car appear boxy and old-fashioned. It does have its own identity, though. The Carens offers a choice of two engines - either a 142bhp 2.0-litre petrol, or a 138bhp 2.0-litre turbodiesel. There are three trim levels; base S, mid-ranking (and best-selling) GS, or LS. Petrol availability is very restricted, and only with the CRDi diesel can you have seven seats. An automatic gearbox is also only offered in diesel guise. Rivals include the Toyota Corolla Verso and Mazda5, plus entry-level versions of the Renault Scenic, Vauxhall Zafira and Volkswagen Touran.

Owning: A large glass area means the cabin is light, while the boot is big and, with fully fold-flat seats, flexible. With all chairs place, the interior still feels spacious as well - but the third row is fairly cramped, while the chairs aren't as flexible as some others in the class. The second row is more comfortable, and although they could do with extra padding, the Kia's space is impressive and it's a relaxing environment on long journeys. When it comes to folding the chairs, the mechanism is very straightforward; it's obvious this is an area Kia's engineers have focused on. Up front, the cabin is one of Kia's best, illustrating the brand's steps forward in terms of layout and ergonomics. It's not quite up to class-leading standards, but it isn't far behind. The plastics feel solid, while basic features such as the electric window controls and central console storage are better designed and finished than on the previous car. It's well equipped too, although not quite as bountiful as Kias of old. Servicing is also surprisingly expensive - 10,000-mile intervals don't help, while economy of the diesel in our hands was an unimpressive 32.8mpg. But residuals should be OK, as the Carens has traditionally been one of Kia's stronger performers. The unlimited-mileage warranty helps offset a steep group 10 insurance rating as well.