We’ve already tried the petrol version of the all-new Kia Ceed, but now we give our verdict on the diesel-engined hatch 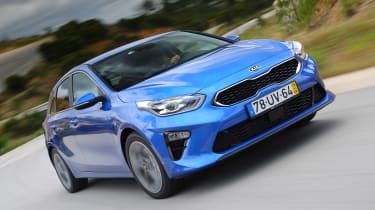 More sophisticated than before, the Kia Ceed is a capable alternative to the the Volkswagen Golf and Ford Focus, and undercuts both on price. The petrol is our pick, but this 1.6 CRDi diesel is refined and frugal, making it a top choice for high-mileage buyers. It’s also well-equipped, has a great infotainment set-up and of course comes with a class-leading warranty.

This is Kia’s new family hatchback. But don’t call it the Cee’d any more; it’s now Ceed; the rather confusing apostrophe placement found on the previous two versions has been axed.

We first drove the new Ceed in June, in turbo petrol form. Now, we’ve driven the frugal CRDi version to see if the diesel is the pick of the range.

With 114bhp, it’s well matched against the Volkswagen Golf’s 1.6 TDI, but the Kia has more torque, so it feels more brisk on the road. It’s on par with the VW for smoothness, too; both in terms of noise and power delivery. We’d have to wait for a full road test to assess fuel consumption properly, but an indicated result of nearly 60mpg was impressive based on our varied route. 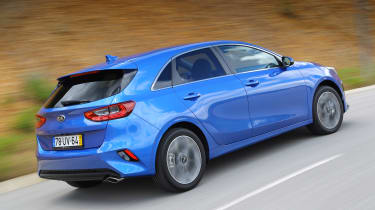 The diesel is offered with either a six-speed manual or a seven-speed auto gearbox. Unless you really need an auto, the manual is the one to have: the twin-clutch box can be a little unresponsive at times, and costs £1,100 more.

The third-generation Ceed is the first to get fully independent suspension all round, and it contributes to an impressively resolved chassis. Sharper, yet more composed than the old model, it’s grippy during everyday driving and adjustable enough when you come across an entertaining back road.

The relatively precise steering is quicker than before, although there’s still not much feedback. It’s a more enjoyable car to drive than the Hyundai i30 hatch on which it’s based, if not as much fun as a Ford Focus.

But the ride comfort at lower speeds lets the side down slightly. While supple and controlled on bumpy roads, around town the newcomer can fidget a little, especially on larger wheels. Elsewhere, refinement is great at 70mph.

Wider and lower than before, Kia says the new Ceed’s cab-rearward design improves athleticism. In reality, while the Ceed looks sharp and handsome square-on from the front, from other angles – particularly the rear three-quarter – it’s just a little bit dumpy. The extra body beyond the rear wheels does bring benefits, though. A 395-litre boot is more than you get from a Golf or a Focus, while a wider cabin improves shoulder room. It’s still more cramped in the back than the VW, however. 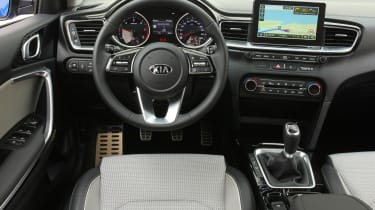 On the plus side, there’s loads of adjustment for the driver’s seat and steering wheel, so getting comfy up front is easy. The design itself is a big leap forward over the old car: the layout is logical and the switches feel sturdy.

All Ceeds have at least a seven-inch touchscreen with Apple CarPlay and Android Auto as standard, while the displays on higher trim levels measure eight inches and add sat-nav. Whichever you choose, Kia’s fast-loading, smart-looking and user-friendly infotainment systems are among the very best that mainstream manufacturers offer.

There are four trim levels to choose from at launch. The basic 2 gets 16-inch alloys, the seven-inch screen, cruise control, air-con and automatic lights. The 3 adds 17-inch rims, fake leather upholstery and the bigger screen. The 2-based Blue Edition and 3-based First Edition limited-run cars feature semi-autonomous lane-keep assist.