Is the big-capacity diesel the best version of new Rio supermini? 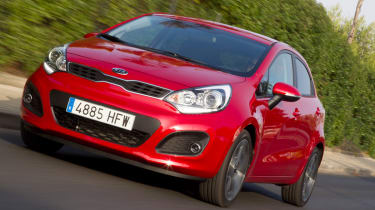 How do you pick between the different versions of Kia’s new Rio? For low-mileage users, the 1.25-litre petrol will make most sense. Buyers focused on fuel bills should opt for the 1.1-litre diesel. But most others should consider this 1.4-litre diesel, with its usable pace and decent efficiency. The Ford Fiesta is a slightly better all-rounder, but the Rio is still a really good car.

Can the diesel version of Kia’s newest car topple the Ford Fiesta from its lofty pedestal? On paper, the signs look good – in 1.4-litre CRDi EcoDynamics guise driven here, it’s not only more powerful, but also more efficient that the equivalent Ford.
While the new three-cylinder 1.1-litre CRDi model is attracting headlines with its bargain price, 88mpg fuel consumption and 85g/km emissions, the 1.4-litre unit counters with more useful performance and superb efficiency by any normal standards. It returns 70.6mpg and emits 105g/km of CO2.
Video: watch CarBuyer's video review of the Kia Rio
[[{"type":"media","view_mode":"content_narrow","fid":"68694","attributes":{"alt":"","class":"media-image"}}]]
Of course, the Fiesta, named Best Supermini at our New Car Awards, also happens to be the best-selling car in Britain, so it’s a sign of Kia’s confidence that it is happy to pitch it into direct competition without relying solely on its value-for-money reputation.

The Rio’s bold new look is a good start. Yes, it borrows parts from the Toyota Yaris, Volkswagen Polo and SEAT Ibiza, but it is attractive and the Kia family nose is immediately recognisable.
Inside, the car is trimmed in top-quality materials with fit and finish comparable to cars in the class above. Other than a steering wheel shaped to match the front grille it’s not daring, but it is logically laid out.
There’s adequate space for five people, although the luggage capacity with the rear seats in place – at 288 litres – is only seven litres less than in the Fiesta.
Turn the key and the 1.4-litre turbodiesel engine fires up instantly, and without the clatter of Korean diesels of old. You won’t mistake it for a petrol unit, but it’s refined all the same.
It continues to impress on the move, and even if you push the engine to the red line it never becomes intrusive. You shouldn’t need to do that, though. Unlike its petrol-fuelled siblings, this Rio has plenty of torque to play with, so it’s more enjoyable to drive and is happy to cruise at low revs.
The lesser models require frequent gearchanges and can struggle on hilly roads, but the 1.4 CRDi unit pushes the Rio on with verve, belying its modest 89bhp. The slick six-speed manual gearbox is perfectly suited to it, too, with a long last ratio for motorway driving, but shorter gears lower down to make the most of the available performance.
While the keen driver will still opt for the Fiesta, the Rio compares well. Body control is good, with no unwanted pitching, diving or rolling, and the suspension deals with bumps in a mature manner.
The steering isn’t the most engaging when you turn into a corner, but this won’t be a priority for most buyers and the light action will be a huge benefit around town.
Value for money is important in this sector, and unfortunately that’s where this particular Rio falls down. It’s more expensive than the less powerful 69bhp 1.4-litre diesel Fiesta for instance. However, it’s well equipped and an ace up Kia’s sleeve is the seven-year warranty.
Why should you buy the 1.4 CRDi version? Well, it’s much more satisfying to drive than both the entry-level 1.25-litre petrol model and impressively frugal 1.1-litre diesel, while it returns decent economy by any measure. It will also deal with a full load of people and luggage more effectively.
Does it beat the Fiesta? In some respects it’s a more appealing buy, but as we revealed in our supermini group test in Issue 1,182, where the Rio came second, it’s the Fiesta that still holds the crown.
Share this on TwitterShare this on FacebookEmail