Our man rolls with it in the hugely capable supermini 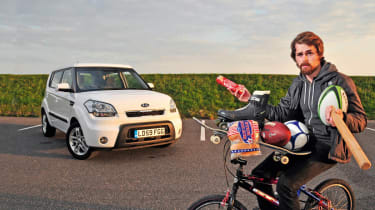 You can keep your rolling pins, skates, bikes, balls, skateboards and bread, because the Kia Soul is a new way to roll...

Know what I’m talking about? No? Then you clearly haven’t seen the latest advert being screened in the US to promote the trendy supermini. In fairness I hadn’t seen it myself until one of the Auto Express team forwarded me a link to the commercial on YouTube.

To put you in the picture, it previews a world where humans have been replaced by hamsters who use their wheels to get around. Until, that is, a bright red Kia Soul pulls up at a set of traffic lights with its stereo pounding. Its hamster driver proceeds to overtake its fellow rodents before coming to a halt next to some empty hamster wheels as the pay-off is delivered: “Kia Soul: A new way to roll.”

Now, I’ve not tried a hamster wheel to get around, but having grown out of skateboards and bikes, this is how I roll nowadays. Cars are the ultimate fashion accessory – especially for younger motorists – and I  have tried some of the most trendy models around. But if I was spending my own money, I’d ignore a MINI (too small) and bypass a Fiat 500 (too cute) to buy a Kia Soul instead.

So far I’ve only had good things to say about the supermini, and if I had to buy a new car tomorrow, I wouldn’t hesitate to splash out on a Soul. Yes, I would prefer a sixth gear to aid motorway refinement and boost economy, and the seats could provide a tad more support. But those are my only real complaints.

The more I think about the Soul, the more I realise how well it works for me. I’m not a massive fan of diesels, but the 126bhp CRDi engine is refined and punchy. And while the cabin plastics won’t have premium brands worried, they don’t feel at all cheap. The interior design also looks good and the boot provides ample space.

Whether I’m chasing a pair of hot hatches in my role as junior photographer, or following a group of luxurious saloons en route to a location, I never feel the poor relation. This is some accolade given the company the Kia keeps.

Better still, our long-termer is loaded with kit. Standard spec includes air-con, an iPod connector and electric windows all-round. Plus, you get the firm’s seven-year warranty, so it would still be covered by the time I’d finished paying for it!

To put that into perspective, a five-door Ford Fiesta 1.6 TDCi Zetec costs £15,695 and doesn’t have as much kit or power as the Soul. And while the Fiesta looks good, it doesn’t stand out from the crowd. So, I’m with the hamsters – the Kia really is a new way to roll.

“The first Soul I saw in the metal was in top-spec Burner trim, finished in black with red accents and lurid graphics. That model was an acquired taste, but our lower-grade long-termer does without the chintz and still manages to look distinctive. A tall driving position gives a great view out, so the Soul comes across as a shrunken Nissan Qashqai instead of a supermini.”