The SV is almost certainly the best car Lamborghini has ever made. From its ear-splitting exhaust note, to the proper head-swivelling supercar styling it fills the brief that Lambos should be the most outrageous cars on the road. But there's real substance behind the drama - usable downforce, delicate steering, huge grip and balance at the limit all combine to make it enormous fun to drive, so long as you can find the space to exploit its epic performance.

So where do you start when trying to describe what the new £321,723, 740bhp, 217mph Lamborghini Aventador SV is like, not just to drive but to look at, to sit inside, to listen to, or even just to smell? At the beginning, I suppose, which was well over four years ago now when the Aventador was first unleashed upon the world.

Back then, in 2011, the Aventador reshaped the headlines not merely because of its outrageous good looks and thundering 6.5-litre V12 engine. It stood out from those around it because it had a full blown carbon fibre chassis tub and racing car-like pushrod double wishbone suspension, and even back then it was obvious to anyone interested that there was quite  a lot more to come from the car.

A year or so later the Roadster version was produced, and an excellent progression it was, too. But even with its roof removed and V12 engine exposed to the elements to give it an extra hit of drama, the Aventador still had more to give. You just knew, deep down, that its four wheel-drive mid-engined chassis could handle more power, and that the entire car was crying out for the lighter, faster, better treatment that’s been at the heart of Sant Agata’s SV models since the Miura first wore the badge in 1971. And now four and a bit years later here it is, the SV version – which stands for Super Veloce and translates to “Extremely Fast”. 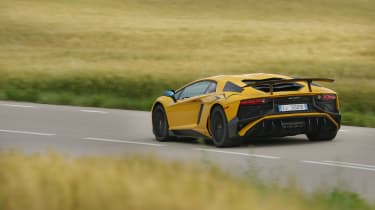 Several aspects define the SV as a more focused machine above and beyond the regular Aventador. Its 6.5-litre V12 has been tuned internally and externally to produce an extra 49bhp, giving it a whopping 740bhp in total. The engine also revs 250rpm higher and rotates more freely thanks to a new variable valve timing system, allied to a brand new exhaust system.

The seven-speed gearbox has also been tweaked electronically to make the shift times faster but more violent than ever, with upshifts thumping through in a mere 50 milliseconds in Corsa mode. Likewise the Haldex four-wheel-drive system has been re-engineered to allow as much as 90 per cent of torque to be deployed via those enormous rear tyres under hard loads.

Turn the traction control off in the SV and you are much more on your own than you are in the regular Aventador. A clumsy boot on the throttle will turn the car right round if the ESC has been disengaged, unlike on the standard car.

Perhaps the biggest step forward made by the SV, however, is its new aerodynamic package. Thanks to a monstrous new splitter at the front, a redesigned underside plus a new diffuser and three stage adjustable wing at the rear, the SV generates a staggering 170 per cent more downforce than the regular Aventador. On the far side of 120mph it produces nearly 250kg of the stuff, with 60 per cent arriving at the rear axle to keep the tail rooted to the ground in quick corners. 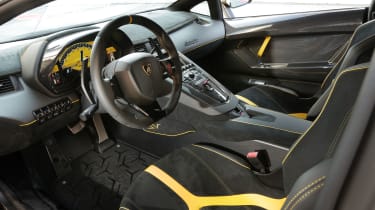 Lamborghini claims the SV is 150 per cent more aerodynamically efficient than the standard car, and that’s the number that counts most when it comes to the management of air, because it takes into account drag as well as pure downforce. It would be relatively easy, say the car’s engineers, to generate vast amounts of downforce, but that’s no use whatsoever if the drag increases exponentially at the same time. But with the SV this isn’t the case. The car is almost as clean through the air as the standard Aventador yet generates massively more aerodynamic grip at the same time.

Mate all these individual elements to a 50kg reduction in kerb weight (thanks to lighter forged alloy wheels and more extensive use of carbon inside and out) and you begin to get an inkling as to how  serious a machine the SV actually is. Except, of course, nothing can truly prepare you for the onslaught of sensations that hit you the moment you fire up the SV and begin to drive it.

On the move it feels instantly different to the regular Aventador. The ride is urgent but not ridiculously stiff, not on the track at Barcelona where I drove it, at any rate. The new variable ratio steering rack feels incredibly natural in its responses but also way crisper and much more incisive than the standard car’s steering system. And the exhaust note is twice, if not three times as loud – to a point where you do wonder how on earth the SV manages to pass European noise tests, even if it does have exhaust baffles that stay shut until beyond 2000rpm. 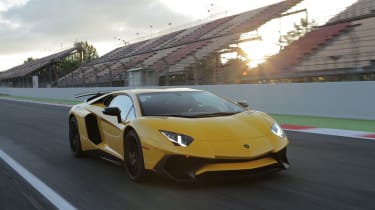 But it’s what happens when you put your foot down and hold it there for a couple of seconds in a low gear that will define your impression of the Aventador most dramatically. The wallop of acceleration is so violent in second, third and even fourth gear that it actually comes as a shock to begin with, even though I’ve driven Aventadors aplenty before.

It doesn’t feel as ridiculous as a LaFerrari in terms of pure, straight line energy, but neither does it feel like it would be murdered by Maranello’s masterpiece along any straight. Considering it costs less than a third of the Ferrari and there will only ever be 600 examples made over the next two years – guaranteeing the SV almost as much exclusivity as the La Ferrari – that makes it seem like peculiarly good value to me.

Potential owners of the SV would seem to think so, too, Lamborghini’s charismatic boss Stefan Winkleman proudly claiming that virtually the entire run of 600 cars has already sold out, the biggest market by far being the USA.

On a circuit as wide and open like the one at Barcelona, home of the Spanish GP, most road cars would feel hopelessly at sea, and not very fast. The straights are long, the corners fast, with only a couple of points on the lap where you drop much below three figures. But the SV is that rarest of road cars that feels entirely at home on a circuit like this. 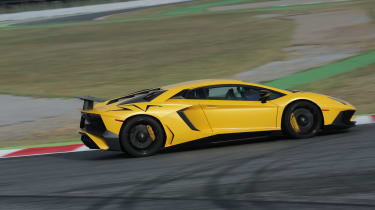 It eats the straights almost as if they aren’t there, and in the corners it feels beautifully planted, its bespoke Pirelli Cora tyres generating huge grip at both ends, even with the ESC stability system switched off (especially with it switched off, in fact, because with it on there’s so much power available the system constantly tries to trim the throttle back).

• The fastest cars around the Nurburgring

The brakes, as you;d expect in a car such as this nowadays, feature enormous great carbon ceramic discs at all four corners, and the feel and power of the system is virtually impossible to fault. The SV stopped time and again, without fade, from ultra high speeds for lap after lap. Bearing in mind that it weighs over 1600kg with fluids plus a driver on board, that’s a deeply impressive achievement.

But not as impressive as the way it sounds or accelerates or goes round corners. Or, indeed, turns heads wherever it goes. The SV is a serious car for serious enthusiasts, no question about that, yet perhaps its greatest trick of all is that it’s relatively easy to drive at the same time. And that was always one of the car’s key engineering briefs; Lamborghini wanted to make an “Extremely Fast” version of the Aventador, yes, but the bosses also wanted to make a car that is approachable and friendly to drive. Otherwise, they concluded, what would be the point?