Before an all-new Defender arrives, the original model gets one last outing for Land Rover’s 70th birthday celebrations. The Works V8 isn’t a simple re-engineering project, but it can’t change what is, in essence, a very old and out-dated car.

The Land Rover Defender is back. But before you get excited and start waving your Union flag with patriotic fervour, it isn’t as simple as that.

To celebrate the firm’s 70th birthday, Land Rover has launched a run of limited edition Defender models. However, unlike a Jaguar D-Type or E-Type Lightweight, the 2018 Works V8 70th Edition isn’t a brand-new continuation model, instead it’s a heavily re-engineered ‘old’ Defender.

Late model Defenders from 2015 and 2016 have been acquired and given a fresh lease of life as a last hurrah for the rugged 4x4. They are taken apart piece by piece alongside ‘re-born’ Series One Land Rovers, two-door Range Rovers and Jaguar E-Types – in JLR Classic’s new facility in Ryton, Warwickshire. 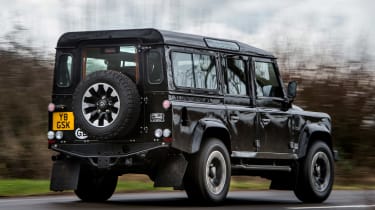 Under the square-jawed bonnet, Classic’s team of brown-coated technicians have squashed in one of the brand’s 5.0-litre V8 petrol engines. Despite losing the Range Rover’s supercharger, the Works Defender is a far cry from the last 2.2-litre diesel models, which left the Solihull factory two years ago.

To cope with the V8’s 400bhp and 515Nm of torque, the Defender has been heavily fettled under the familiar boxy bodywork. There’s an eight-speed ZF automatic gearbox with the ‘trigger’ gearlever from a Jaguar F-Type, beefier brakes and a handling kit comprising new springs, dampers and anti-roll bars.

Twist the starter key and the V8 burbles into life, albeit rather politely compared to the uncouth Range Rover Sport SVR. Tug the trigger gearlever and release the railway signal box-like handbrake, and immediately the Works V8 feels like no other Defender.

The absence of that wining supercharger is very evident, with a hard-edged roar that erupts inside the cabin. And thanks to the way a Defender is made, you’re right next to the engine with very little sound deadening between you and that powerful motor. Gear changes are smooth and so is the kick-down, and the result is a hugely fast car – 0-60mph takes just 5.6 seconds in the Works V8 90, or 5.8 seconds in the longer, seven-seat 110 Station Wagon. Top speed is limited to 106mph, but only because of the modest tyre ratings. 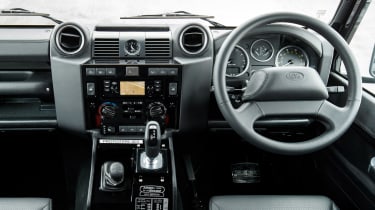 Aside from the wonderful noise, the biggest transformation is that this Works V8 is the first Defender that actually rides properly. All the work on the suspension has meant the Works car swallows bumps and potholes, rather than clattering and wobbling over them. The steering is still a bit woolly compared to a modern SUV, but it’s better than before. The brakes are strong and the Defender is more stable under hard braking, while there’s far less roll through tight bend. It still sways around should you turn into a corner too quickly, though.

The result is fun and noisy, but the Works V8 is still a bit of a chore to drive. Even with the new supportive bucket seats, the driving position is awful, and you’re perched up so high you still feel exposed. But even a thoroughly re-engineered Defender like this Works V8 couldn’t – and shouldn’t – change this inherent character.

Land Rover Classic is only offering 150 cars, and while it is still technically for sale, the firm is wading through over 700 expressions of interest. Prices start at £150,000.