4x4 favourite bows out in style with retro-themed beauty 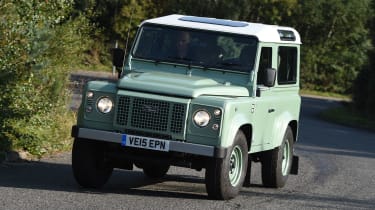 By all rational measures the Defender is totally outclassed by modern off-roaders. Yet the Heritage is packed with charm, rewarding to drive and unrivalled off-road. And at £27,800, it looks like great value alongside the Adventure and Autobiography editions, which start at £43,495 and £61,845. If you want an SUV with huge character and surefire future classic status, then look no further.

Over the course of nearly 70 years and countless updates, the legendary Land Rover Defender has continued to set the standard for unstoppable off-road ability.

But ever-tightening emissions and safety regulations mean that time is running out for the famous four-wheel-drive machine, with production being wound down this year.

However, rather than mourn the loss of its iconic Defender, Land Rover is sending off its evergreen off-roader in style with a trio of ‘Celebration Series’ special-edition models.

The lavishly equipped Adventure and Autobiography are hugely desirable, but it’s this Heritage model that’s closest to the spirit of the original. As its name suggests, this machine is packed with retro touches that hark back to the earliest Land Rovers. 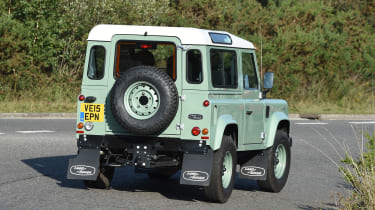 Only 400 Heritage models will be sold in the UK, available in this short-wheelbase 90 bodystyle or long-wheelbase 110, and all are finished in distinctive Grasmere Green metallic paint with a contrasting white roof.

Other old-school additions include the heavy duty steel wheels and the silver painted door hinges and bumpers. 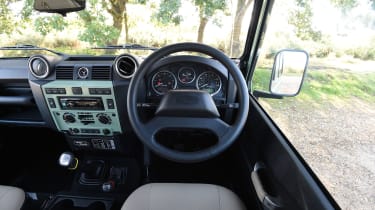 Finally, the left-hand front wing gets a black and white HUE 166 badge, which is a direct reference to the registration plate of the oldest surviving Land Rover, affectionately known as ‘Huey’ by fans of the brand.

Climb into the Landie’s cabin and you’ll find some more nods to the past, such as the colour-coded red and yellow collars for the levers controlling the six-speed manual box and the dual-range transmission. 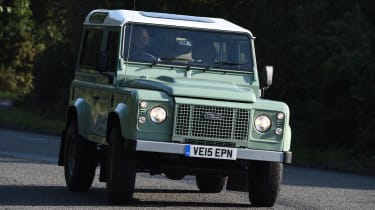 As with all Defenders, the driving position is high – you tower over other SUVs – and slightly cramped. The steering, gearshift and clutch are heavy, the punchy 120bhp 2.2-litre diesel is gruff and the ride bouncy, while our car’s chunky off-road tyres added extra vagueness to the handling.

Yet despite its dynamic shortfalls, the Defender is hugely rewarding to drive. There’s a direct connection between driver and machine, and it doesn’t take long before you’re totally absorbed in the driving experience – and amazed at how quickly this big machine can be hustled along. 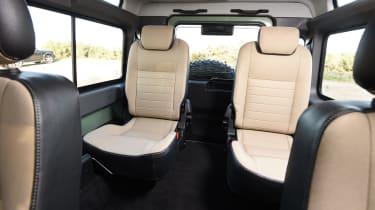 But it’s when you head off the beaten track that it really comes into its own. It doesn’t have the hi-tech Terrain Response system of the latest Land Rovers, but seven decades of development mean it’s still the best 4x4 by far when the going gets tough.