We drive the Range Rover Sport Supercharged, which gets a 5.0-litre V8 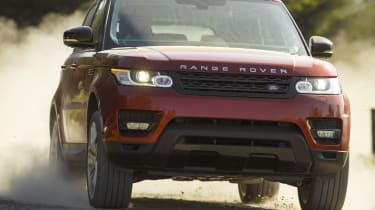 Land Rover's big achievement with the new Sport is creating a car that upholds Range Rover's traditions of luxury, refinement and off-road invincibility, but handles like something half its size. This supercharged model is more fun to drive than the V6 diesel and just as capable in all other areas; it's a shame then that the running costs are hard to justify, because in every other respect it's a five-star car.

Land Rover says its objectives with the new Range Rover Sport were to create its fastest, most agile and most responsive model ever. The 288bhp SDV6 diesel showed signs of dynamic greatness, but to find out precisely what this car is capable of, the range-topping Range Rover Sport Supercharged model should reveal more.

We're familiar with Jaguar Land Rover's 5.0-litre supercharged V8 by now, but nothing can prepare you for the slug of acceleration it delivers, even when it has a 2.3-tonne SUV to haul along. Open the throttle up, wait for the eight-speed auto to kick down (or flick down a few ratios yourself with the paddles) and the car snaps forward violently, building speed relentlessly until you run out of road or nerve, while the exhausts let out a glorious V8 gargle.

To ensure we explored the performance limits, we were let loose on a two-mile long strip of runway. With the DAB radio playing soothing tunes, the air-con on full blast and us reclining in the soft leather driving seats, it recorded a 0-100-0mph time of 16.8 seconds - just 0.9 second slower than a Ford Focus ST - with zero fuss. On our high-speed run it sailed past 150mph, before we ran out of tarmac.

It can do more than just straight line speed, though, as we discovered on twisting British B-roads. Supercharged models come with the full Dynamic pack as standard - which adds active roll bars, adaptive dampers and torque vectoring. The latter not only works with the ESP to brake the inside wheel during cornering, but uses the locking differential to actively send more power to the outside rear tyre when it needs it.

As a result the body doesn't just stay eerily flat mid corner, but when you apply the full-force of the V8 at the apex none of it is wasted, and you're catapulted out the other side. Set the Terrain response to Dynamic mode (which firms up the anti-roll bars, dampers and steering, while amplifying the torque vectoring effect and sharpening the gearbox and throttle) and the Range Rover Sport doesn't just deal with corners well, it's serious fun to drive fast.

However, being a Range Rover, luxury and refinement haven't been forgotten - so the engine is just as happy being docile as it is charging for the horizon. In fact, with 25Nm more torque the V6 diesel and a smoother power delivery, it's an even more relaxing way to cruise through town or crush some motorway miles. Think of it like a long-distance GT - a Jaguar XK or Aston Martin DB9 perhaps - except with space for 5+2 (if you go for the optional third row of child seats) and a commanding elevated driving position.

It performs every bit as well as the diesel off-road, too. Off-roading traditionalists might not appreciate the way the Terrain Response system, low-ratio 'box, hill descent control and the water level graphics do a lot of the work for you, but the rest of us will be amazed at how the Range Rover Sport deals nonchalantly with anything in its path. For the first time though, for those who are confident they will never head off-road a lighter, single-ratio gearbox (no low-ratio setting) is offered.

So what are the downsides? With pitiful fuel economy of 22.1mpg (although a figure in the teens is more realistic), you'll become a familiar face at your local petrol station. And then there's the price - £6,500 more than a V6 diesel in the same spec - which means for all but the obscenely rich it's the SDV6 that makes more sense.