It's the entry point to the Range Rover line-up, but the Vogue is still a luxurious way to travel 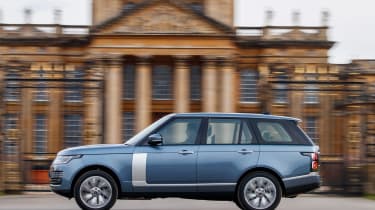 The Range Rover Vogue is the entry point of Land Rover’s flagship line-up, but it doesn’t lack any of the superb comfort and refinement of its more expensive siblings. It’s a formidable rival for other luxury SUVs with a price to reflect that. With a host of standard equipment it doesn't feel like an entry-level model, as it shouldn't with a price over £80k, and there's a real sense of occasion every time you climb aboard or are lucky enough to be driven by somebody else in one, allowing you to savour the luxurious interior.

It's likely that you've come across the name Range Rover Vogue when looking at the largest, most luxurious version of Land Rover's flagship 4x4. The Vogue name means it's the entry point to the Range Rover line-up, although calling it basic or entry level is underselling the Range Rover Vogue considerably, because you still get plenty of luxury and prices start from £80k.

There are two versions available, Vogue and Vogue SE, with the latter commanding a premium of around £6,000 over the standard Vogue. Even the basic model comes with plenty of kit, and like the rest of the Range Rover range, benefitted from a facelift for the 2018MY.

On top of that, the Vogue SE adds soft-close doors, LED ambient lighting inside, 360-degree parking cameras, heated and cooled electric seats in Aniline leather and 21-inch wheels, compared to 20-inches on the standard Vogue. 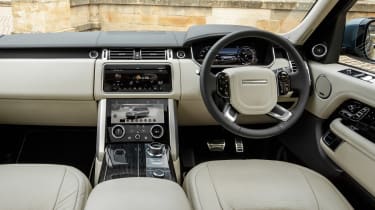 Like the rest of the Range Rover line-up, the Vogue models feature Land Rover's Terrain Response system combined with standard air suspension to deliver the ultimate all-round driving ability. That means greater off-road ability than many owners will ever ask of it, while delivering one of the plushest on-road rides of any car on sale today. There's lots of safety kit, too, with dynamic stability control including trailer stability assist for towing, lane departure warning and the usual suite of airbags on board.

In terms of engines, the Range Rover Vogue has three engine choices, and there are four options on the Vogue SE. The range kicks off with the 258hp 3.0 TDV6 diesel, which is arguably more than enough engine for anybody. Land Rover also offers the P400e PHEV plug-in hybrid model, which features a 2.0-litre petrol engine, electric motor and battery which has 404hp and emissions of 64g/km, making it a good choice for business users.

The Vogue models are rounded off by the 339hp 4.4 SDV8 diesel, and all these engines are offered in Vogue SE trim, along with a 340hp Supercharged V6 petrol. All engines come with Land Rover's ZF-sourced eight-speed auto, and permanent four-wheel drive is of course standard across the range. Unlike other versions of the Range Rover, Vogue models only come in standard wheelbase guise - there's no Vogue LWB.

It’s a testament to the work of Land Rover’s engineers that the Range Rover Vogue is still great to drive. For starters, it’s impressively quiet and refined inside, while the smooth eight-speed automatic gearbox contributes to a relaxed driving experience.

The Range Rover Vogue’s twin tailgate allows you to open one or both parts as needed: leaving the bottom half in place makes it easy to pop smaller items straight into the boot, while lowering it gives you a useful temporary seating area.

In the rear there’s plenty of width and a flat floor for three people to sit alongside each other in comfort and just about enough legroom to be comfortable on long journeys. With the extra height the Range Rover gives you in the cabin, it feels truly massive in the back with a fantastic view out. And the air-suspension can be used to lower the body and make it easier to get in – although it's still not quite as effortless as a Mercedes S-Class or any other limousine. 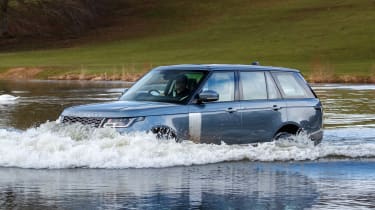 Overall, the Range Rover Vogue is a great introduction to the luxury model, so much so that you really won't feel short-changed if you went for one over the higher-spec, six-figure variants in the Range Rover line-up.