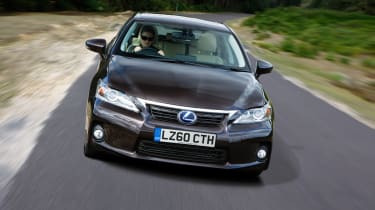 As an entry point to the Lexus range, the CT 200h works well, and fills the gap between the Prius and RX hybrids. But claims of sporting ability ring hollow. The chassis doesn’t have the agility, the steering is too wooden and the long-stroke engine is too laboured. Nevertheless, with fuel prices rising, this distinctive and efficient four-seater hatch makes sense. It’s likely to sell strongly – although so will its rivals.

MEET the compact Lexus that’s taking on the Audi A3 and BMW 1-Series! The five-door CT 200h is not only the Toyota luxury brand’s first small executive car, but it will also be the first hybrid in its class when sales start in March.

It’s priced at £23,485, and is effectively a revamped Prius on a new independently sprung chassis with a handsome if rather uninspiring body, available in sombre silver, grey or blue.

Under the skin is the familiar Prius driveline, comprising a four-cylinder petrol engine, an 81bhp electric motor and a nickel metal hydride battery. The brilliance of this is that the engine can drive the front wheels and/or charge the battery at the same time.

It’s a highly efficient way of recouping braking energy as electricity, and means the Lexus (as with the Prius) has excellent fuel consumption in town, and is also capable of running for short distances on electricity alone.

Over 1.5 million examples of the Prius have been sold, and apart from the recent US recall, they’ve proven reliable. Yet Toyota has never positioned the Prius as sporty; the CT 200h fills the gap.

Step inside and the luxurious layout is just what a Lexus buyer expects. Leather seats (in all but the entry SE-L) with soft-touch plastics and aluminium inserts set the tone, and the facia is stylish.

The seats are comfortable, with excellent but unobtrusive side supports. They adjust for height, and combine with the rake movement on the steering column to make for a decent driving position. In the rear, leg and headroom are cramped, while the 375-litre boot is shallow. Fold the seats and it expands to 985 litres.

Visibility could be better, though, especially through the pillar box-like front windscreen and rear three-quarters.

The dash is a study in classy information display, with the familiar moving diagram showing energy flows and an electric blue battery charge gauge. The latter changes to a regular rev counter when drivers engage sport mode.

Doing so releases the system’s full 650 volts, and allows the engine to rev harder, with more dynamic software mapping for the throttle and electronic power-steering. It also reduces the abruptness of the stability and traction control electronics.

By contrast, Eco mode limits power, softens the respective electronic mapping and reduces the air-conditioning effect. Press start and the four-cylinder engine sounds anything but sporting. Eco mode hampers responses, but in Normal, the 1,370kg Lexus pulls away briskly, with direct and well weighted, if lifeless, steering.

On our SE-L model’s optional 17-inch wheels, the ride is harsh and the tyres are noisy on some surfaces. The rigid bodyshell is a vast improvement on the Prius and the independent rear suspension copes with corners better, but there isn’t much joy in driving the Lexus hard. Engineers admit they would prefer a more agile set-up.

The brakes are powerful if wooden in feel, with a soft initial bite as the regenerative braking starts, then progressively harder stopping when the friction linings are deployed. Plus, generous safety equipment includes eight airbags, on top of the stability and traction control.

Rival: BMW 118d EDGED out by the Lexus on eco credentials, but the BMW is light years ahead on performance and dynamics, and is arguably more frugal over a long run. A class act.