Can the powerful Lexus IS-F topple the mighty BMW M3? We get to grips with the tyre-smoking new saloon. 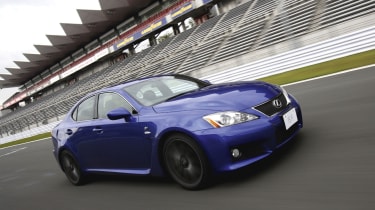 The V8-powered IS-F is the most outrageous motor Lexus has ever built. It’s blindingly quick and roars like an exotic Italian sportster. But it still looks like an IS and, while it’s fun on the track, it’s not yet proven on road. Nor can the Lexus match the image or heritage of BMW’s M3 or the Audi RS4, even if it is cheaper.

Any self-respecting prestige brand needs an ultra-fast saloon in its line-up – and Lexus doesn’t want to get left behind! The IS-F is touted as a rival for the Audi RS4 and BMW M3, but does it live up to the hype?

Parked on the tarmac waiting for our exclusive drive at the Fuji Speed-way in Japan, it looks discreet. A bonnet bulge makes room for the V8 engine, while the revised front bumper and side sills hint at the model’s enhanced performance potential.

In profile, there’s no missing the super-low stance, yet to our eyes it all looks more like an aftermarket special than flagship performance car. The interior changes are surprisingly low-key, as well. It’s as if the designers ran out of either money or ideas. It’s a standard IS cabin with carbon-effect trim on the console.

Start the engine, though, and you can tell where the cash has really gone. The unique unit was developed under the watchful eye of the Toyota Racing Development division.

Essentially, it’s the 4.6-litre motor from the LS460 which has been bored out and given a new cylinder head. It produces 411bhp at 6,600rpm and is an absolute gem – the sprint from 0-60mph takes a claimed five seconds. There’s plenty of low-down torque too, and a fantastic engine note that sounds as good inside the car as it does from the outside.

Six-piston calipers grip huge 14-inch discs to ensure the IS-F slows down as well as it speeds up. Lexus has also developed what it claims is the world’s quickest-shifting eight-speed transmission. Dubbed SPDS, for Sports Direct-Shift, the automatic gearbox can change ratios in only one-tenth of a second.

It’s faster and smoother than VW’s DSG, and shifts are instantaneous. The set-up even blips the throttle on downchanges. The lightning-fast responses make flicking down the gearbox using the steering wheel- mounted paddles a real joy.

The Lexus is equally inspiring in the bends. With a strengthened chassis, stiffer dampers and well weighted steering, it’s an entertaining drive. Due to the heavy V8 sitting up front, the nose runs wide if you carry too much speed into a corner. Get on the power early, and the tail will slide.

Lexus has developed a three-mode version of its Vehicle Dynamics Inte-grated Management (VDIM) stability control to keep the newcomer on track. Change from Normal to Sport mode, and the threshold at which braking, steering and throttle interventions kick in is raised. Turn it off, though, and the power can easily unstick the rear tyres.

On a smooth circuit, the IS-F is an impressive package, but we couldn’t help but wonder how the car would deal with a wet, bumpy B-road. We’ll have to try it on UK tarmac before we know if the likes of BMW and Audi really need to start to worry.