With the IS F, Lexus is aiming to take on high performance rivals from BMW and Mercedes. 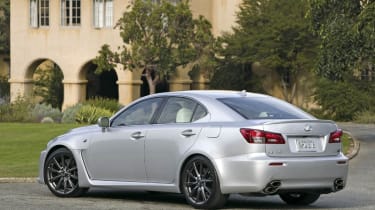 There’s much to like about the IS F, with its brash bodykit, storming V8 engine, eight-speed transmission and amazing soundtrack. But while it’s fun to drive, Lexus’ first performance saloon isn’t quite as sharp as its German rivals. Still, it is well equipped and should certainly be more exclusive – only 150 models will be available this year, 40 of which have already been sold.

Premium brands such as BMW, Audi and Mercedes have been making super-fast versions of their everyday saloon cars for many years. Finally, Lexus has decided to jump on the bandwagon with its first-ever performance car, the IS F. So is it a case of better late than never?

On first impressions, the answer is yes. While the Japanese firm’s models are usually subtly styled, the newcomer is quite the opposite.

A beefy bodykit sets the F apart from the standard IS, and it certainly looks every inch the super-saloon, especially with contrasting black 19-inch alloys. A bulging bonnet has been fitted to make room for the 5.0-litre V8 underneath, too. This superb powerplant develops 417bhp, which, crucially, is 3bhp more than the output of the IS F’s main rival, the BMW M3. The result is fearsome acceleration – 0-62mph takes only 4.8 seconds – and a top speed of 168mph.

There’s no doubt that the engine is a real gem. Throttle response is razor sharp, while power delivery is linear. But it’s the noise of the engine that impresses most. The inlet manifold is fitted with a special valve that opens at 3,600rpm and increases the volume of the V8’s fabulous soundtrack. Purists may be disappointed to hear that the IS F is only available with an automatic gearbox, but they shouldn’t be. Not only does it have eight ratios, but swapping cogs in manual mode with the wheel-mounted paddleshifters takes only a tenth of a second, the fastest change of any road car.

This isn’t enough on its own to make the IS F a success, though. A good performance saloon must deliver terrific handling, and that’s why Lexus’ engineers have lowered the model’s ride height and stiffened the suspension. As a result, the newcomer corners much better than the standard model. Revised steering improves feel and feedback, while huge Brembo brakes provide awesome stopping power. Despite these changes, the Lexus doesn’t feel as sharp or responsive as an M3.

Still, it’s very entertaining to drive. And you can alter the sensitivity of the stability control depending on your mood, or turn it off completely for some serious tail slides.

Yet the newcomer can be calm and tranquil, too. It’s easy to navigate round town, and relaxing on the motorway. The comfortable leather sports seats certainly help, although the rest of the cabin feels rather drab for a racy model. As you’d expect from the firm, it’s packed with kit, with satellite navigation and a state-of-the-art 14-speaker Mark Levinson stereo system as standard.

However, you’d expect the IS F to be well equipped given that it costs £51,000. This is £375 more than the M3, which, ultimately, is a better car. Still, the IS F is an impressive first attempt by Lexus, and buyers are guaranteed an exciting experience.