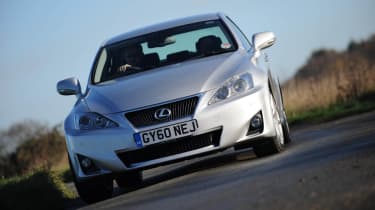 With this revised IS, there’s no doubt Lexus has moved the game on. The new entry-level diesel may be down on power, but it still makes a lot of sense for business drivers – the model’s core market – and it has one of the most composed, comfortable and luxurious driving experiences around. It’s no class-leader, yet it is a decent alternative to many more obvious choices.

Taking on BMW’s 3-Series is about as Herculean as motoring tasks get – but when Lexus launched the second-generation IS back in 2005, the car gave the German establishment a fright. Now a revised and updated version is here, boasting a new, more efficient diesel engine. Is this the model that finally topples the 3-Series?
The entry-level IS 200d replaces the IS 220d. It uses the same 2.2-litre turbodiesel, yet is 5mpg more economical, returning 55.4mpg combined.
It also emits 14g/km less CO2, dropping overall emissions to 134g/km. That’s still not as good as a BMW 318d – which emits 119g/km – but it’s great news for business drivers, who’ll now find themselves in an 18 per cent company car tax band, while road tax drops to Band E, or £110 per year. The pay-off is slightly less outright performance. While the IS 220d produced 175bhp and 400Nm of torque, the new IS 200d posts 148bhp and 340Nm – and the on-paper figures tell their own story, with 0-62mph now taking 10.2 seconds against the outgoing car’s 8.9 seconds.

In the real world, though, you barely notice much difference. Whether on a B-road or at higher speed on the motorway there’s still plenty of overtaking urge, and the diesel thrives on revs, with a wide powerband. The six-speed box has a long throw, but its tall top gear makes for a fine cruising companion.
In fact, the IS is one of the most relaxing cars you can buy. The seats are comfortable and soft, the engine is quiet and the ride is soothing but not sloppy. In fact, it’s a shame only petrol IS models get an automatic gearbox option – that really would complete the package.
Keen drivers who are looking for a car that’s as sharp through bends as a 3-Series will be disappointed, though. The IS handles tidily but it’s not especially sporty, with light and rather numb steering. Other drawbacks? Well, the seats may be comfortable but you sit too high on them, and headroom could be better in the back.
However, with handsome looks – the IS gets revised lights including neat daytime running LEDs – and a price which hasn’t changed over the outgoing model’s, there’s much to like about it, even if it’s still not quite top of the class.
Share this on TwitterShare this on FacebookEmail