We take to the road in Lexus' sharp new compact SUV contender. Should BMW and Audi be worried? 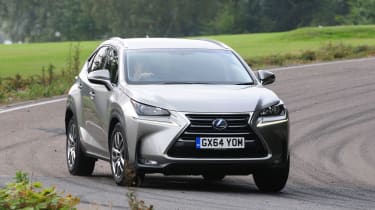 The NX looks sensational on the outside and feels inviting once you step inside, it’s a pity then that the dynamics team couldn’t instil it with a driving experience that raises the game above ‘good enough’. The NX will win fans for its cabin quality and refinement, plus its 22nd century bodywork, but not the lacklustre way in which it tackles a road.

The razor-sharp collection of creases that was the Lexus LF-NX concept we saw at the 2013 Frankfurt Motor Show was frankly a mess, but in being softened for the road-going NX you see here, Lexus has turned out one of the most handsome compact premium SUVs out there. In F-Sport trim particularly, with its glinting ‘spindle grille’, 18-inch alloys and extra intakes, the NX unashamedly grabs your attention. So does the engine specification, in fact. Being a Lexus, there’s the usual hybrid version, but of more note is the NX200t – the ‘t’ stands for turbo, and is Lexus’ first attempt at a forced-induction engine. The petrol-fuelled NX200t is aimed at the Chinese market mainly, but with no diesel option planned and the hybrid drivetrain still disappointing to drive, the 2.0-litre turbo is the NX’s headline act.

Allied to a proper six-speed automatic gearbox (no CVT nonsense here) and front- or all-wheel drive, the drivetrain is remarkably quiet in relaxed driving with very little turbo lag to speak of. This is the NX200t’s comfort zone, however: prod the accelerator pedal past the kickdown button and the transmission tries to find an unnecessarily low gear. The application of Lexus’s eight-speed automatic would certainly make the car feel more flexible, and improve upon the touring range. Claimed economy is a creditable 34mpg, but European-dwelling diesel fans will be far from impressed at that number Lexus claims the NX200t develops a healthy 235bhp and 350Nm, achieving 0-62mph in 7.1 seconds and 124mph. However, not only does the car sound strained and less grunty than a VW Group turbo when opened up, but it never really feels the full Golf GTI’s worth of poke. Obviously it’d be ludicrous to expect out-and-out hot hatch performance from a circa-1700kg SUV, but by the same token, anyone stepping out of one of the NX’s punchy turbodiesel rivals will be left feeling a little short-changed. For the class, the NX handles well enough, but quite as well as a BMW X3 or X4. Dial the adaptive driving mode into Sport or Sport Plus and body roll can be all but eradicated in sweeping bends, so long as you’re happy to eradicate ride comfort also. The default ‘Normal’ and ‘Eco’ modes are much more comfortable, but the NX remains on the firm side.

Then again, given the prevalence of stiffer M Sport BMW X3s, S-line Audi Q5s and suchlike in the UK, the NX’s sometimes unyielding ride is unlikely to be a deal breaker for its intended audience. Likewise its variable-weight but untalkative steering. The NX is again good enough for the class, but unremarkable dynamically. At least it feels lighter on its feet and notably more agile than the hybrid version in a back-to-back test. The NX claws it back with another finely executed cabin. The details aren’t as fresh as its IS saloon brother – there are no swivelling instrument dials, nor touch-sensitive heater controls. But the raised climate control pier breaks up the dash design and the build quality, even on the pre-production prototypes we drove, was beyond reproach.

[[{"type":"media","view_mode":"content_narrow","fid":"122749","attributes":{"alt":"","class":"media-image","height":"280","typeof":"foaf:Image","width":"420"}}]]  Notable details in the NX include a touchpad in place of the old physical ‘mouse’ control for the 6.2-inch infotainment screen. It’s still not as accurate as the scrollable wheels favoured by the ‘Big Three’ German makers, but the matt-finish pad is a step in the right direction. There’s also a portable vanity mirror which doubles as a storage bin lid, and a wireless charging pad for smartphones.

The front seats feel cocooned but not claustrophobic, but Lexus’ decision to raise the rear bench for a better view forward impinges on headroom for adult rear passengers, especially when the optional full-length glass roof’s blind is closed.