The RC is certainly comfortable for two, but you’ll struggle with anyone bigger than children in the back and the boot is small 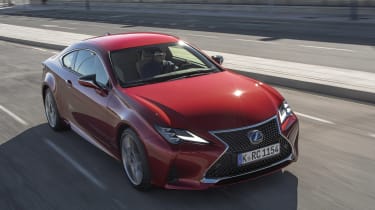 The RC’s ride is firm but comfortable, yet it’s the typically plush and widely adjustable Lexus front seats that really make long journeys a pleasure. F-Sport versions get slightly firmer chairs so if you’re of a larger build or have a bad back it may be worth avoiding those.

In the back is where the main issues lie from a practicality standpoint. Access isn’t too bad for a coupe – the front chairs slide forward electrically on most models even if the mechanism is a little slow. It’s the actual space on offer that’s the problem. It’s fine for children, and the seats split-fold to aid versatility, but adults will have a lot to complain about.

Visibility isn’t much to shout about, even by coupe standards. The view past the A-pillars isn’t a problem, but the car’s long front-end and jutting spoiler can make it difficult to place on the road.

Storage is limited, with a decent glovebox and a lidded cubby between the front seats, but the doorbins are narrow and limited storage in the centre console.

The Lexus IS isn’t one of the most spacious cars in the compact executive class, and the RC is even poorer. Accessing the rear is tricky, as the powered front seats take a while to move forward, but once you’ve squeezed through you’ll find the sculpted bench gives adequate legroom and just enough headroom. You’ll feel hemmed in, but it's far from uncomfortable.

It’s OK for children, or very short journeys but that’s it. The BMW 4 Series, despite being 60mm shorter and slightly lower, does better in terms of rear seat space, partly thanks to its 80mm longer wheelbase.

Boot capacity is not always a priority for a sleek two-door, but many in the class are offering larger load spaces than the RC. Thanks to its batteries encroaching on the boot floor, the RC 300h has a 366-litre boot, ever so slightly smaller than that of the RC F. The RC’s boot opening is small, and the hybrid's battery pack location means there’s no underfloor storage and there are also some awkward load bay intrusions, too. 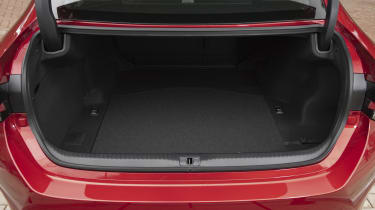 These figures might sound reasonable, especially given it’s more space than in some family hatchbacks, but the C-Class Coupe offers 400 litres, the 4 Series’ 445 litres, and the Audi A5 a healthy 455 litres.

One mitigating factor is that the RC gets a space-saver spare wheel as standard, whereas on some rivals it’s optional and cuts space. Another is that Lexus has helped you make use of what little space there is, with a 60/40 split-fold rear bench and a ski-hatch.