The Mazda 3 MPS is one of the most powerful hot hatchbacks you can buy, but is some way off the pace compared to more modern rivals 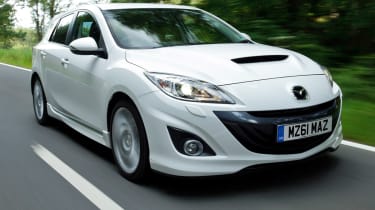 The Mazda 3 MPS is the flagship hot hatchback version of Mazda’s compact family car. The standard model is one of the sportiest hatchbacks you can buy, so fitting it with a 2.3-litre turbocharged engine should make for a tantalising prospect. However, something has been lost in translation, and the 3 MPS isn’t as good to drive as a Renaultsport Megane or VW Golf GTI. It’s fast enough in a straight line – 0-62mph takes 6.1 seconds, but the stiff suspension doesn’t enhance the handling. On the plus side, the 3 MPS is cheaper than most of its rivals, yet comes loaded with standard kit – the only option is what colour you want your car in.

The Mazda 3 MPS should be a fun car to drive, but ultimately it’s a letdown. The standard 3 is entertaining in the corners, but the MPS's 256bhp 2.3-litre turbo petrol engine overpowers the front wheels, resulting in large amounts of torque steer, and the stiff suspension makes the car unsettled in corners. That stiff suspension spoils ride comfort when you’re taking it easy, too, meaning the 3 MPS can be extremely tiring to drive over long distances.

The Mazda 3 MPS is competitively priced, as it undercuts the Renaultsport Megane, VW Golf GTI and SEAT Leon Cupra R by about £2,000. It also comes with a long list of standard kit, including sat-nav, a Bose stereo, rear parking sensors, part-leather heated seats and more. That powerful turbocharged petrol engine puts pay to low running costs, which were only slightly improved with the car's light facelift in 2012. Fuel economy of 30.1mpg and emissions of 219g/km trail that of the GTI and Renaultsport, while the more powerful Vauxhall Astra VXR beats the 3’s economy and emissions figures, too.

The standard Mazda 3 looks smart, and the 3 MPS has a few tweaks to give it a more aggressive appearance. There’s a restyled front bumper with gaping full-width air intake, and another in the bonnet that feeds air to the turbo’s intercooler. At the back, there’s a large spoiler over the rear window, while twin exhausts and 18-inch alloys hint at its performance potential. Inside, half-leather heated sports seats are added, but that’s about the only change from the standard car – the dash has the same fussy layout, with lots of buttons, especially on the steering wheel.

The Mazda 3 MPS is as practical as the standard hatchback. Larger sports seats up front cut into rear leg space a little, but there’s plenty of room for four people inside. The driver sits low, which adds to the 3 MPS’s sporty appeal, but there are a lot of buttons on the dashboard and the sat-nav is only operable from the steering wheel, which can be fiddly on the move. Boot space is fair for a car of this size, although not class leading.

The 2.3-litre turbo engine in the 3 MPS first arrived in the Mazda 6 MPS back in 2006, and was used in the last 3 MPS, so it is a well proven unit that should cope well with hard use. The standard Mazda 3 has a five-star Euro NCAP crash test rating, and just like the standard car, the hot MPS version comes with six airbags, electronic stability control and traction control. It also comes with a handy blind-spot monitoring system, which audibly alerts you fail to see something in the mirrors.