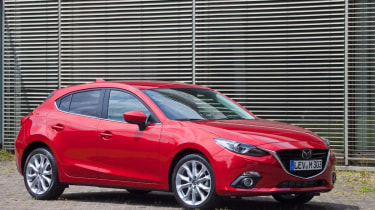 The big-engined Mazda 3 is well out of kilter in a market dominated by small diesels and petrol turbos, but Mazda has managed to deliver fuel economy and driving dynamics to rival the best in class. Adding to the new car’s appeal is the gorgeous styling and excellent cabin, with buyers able to specify gadgets like adaptive cruise control. This is still just a pre-production model, and we’ll wait to drive the finished product before coming up with a definitive verdict, but the new 3 has the potential to be a five-star car.

Mazda is on a roll, having won Best Family Car and Best Crossover at the recent Auto Express New Car Awards 2013 with the Mazda 6 and CX-5 respectively. So the new Mazda 3 has a lot to live up to – and we took the wheel for an early test drive.

The latest Ford Focus and VW Golf rival will cost from around £16,500 when it goes on sale in December, and in a move that bucks the downsizing trend, the predicted best-seller will have a 118bhp 2.0-litre naturally aspirated petrol engine.

It’s less powerful than the 125bhp 1.0-litre EcoBoost in the Focus, but Mazda’s SkyActiv tech has ensured fuel consumption is almost identical, at 55mpg. There are crucial benefits to this high-capacity engine, too, as Mazda says its economy figures are more achievable in the real world than in smaller turbos.

Yet it has enough low-down torque to prevent the car feeling sluggish in town, plus plenty of power at the top end if you’re driving hard. The 99bhp 1.5-litre petrol runs out of puff sooner, but the 148bhp 2.2-litre diesel is great, mixing company car-friendly CO2 emissions of 104g/km with a 0-62mph time of 8.1 seconds.

Mazda is promising a sporting driving experience in all versions, and we were impressed by this pre-production 3. The steering and gearshift are inspired by the MX-5 sports car, and offer natural feel with quick responses.

The Ford Focus is probably the most fun car to drive in the class, but the 3 will come close. Plus, the suspension is well judged; firm but well damped, and enough to take the edge off rough roads.

Mazda would like to be seen as an under-the-radar BMW, and the interior feels solid, with black, soft-touch plastics and chrome highlights. Exact specs have yet to be decided, but higher-grade models get an elevated screen with functions like smartphone connectivity controlled by a BMW iDrive-style wheel in front of the central armrest.

A head-up display is another useful gadget likely to be standard on top-spec Sport models, while all versions will come with automatic emergency braking that’ll bring the car to a halt at speeds under 19mph.

The 3 is a good 100mm longer than the Focus, and that big car feel extends to generous leg and headroom for rear passengers. Boot size is merely average at 350 litres for the hatch (the Golf has 380 litres), but the imminent saloon version ups that to 419 litres.

While Mazda has yet to confirm final pricing, our mid-spec SEL model with the 118bhp 2.0-litre petrol engine is expected to cost from around £18,500. That’s enough to undercut major rivals like the Golf – and with the same all-round qualities that made the 6 Tourer and CX-5 our class favourites, the 3 looks set to be another Auto Express favourite.