Mazda will unveil its first electric car later this year, promising a different approach to its rivals. We drive an early prototype version 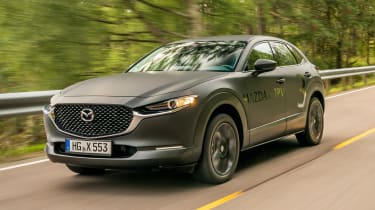 A modest approach to battery size and range won't put Mazda to the top of the EV charts, but there is plenty of merit to the Japanese brand’s philosophy. The inclusion of a range-extender will be reassuring for some, and there are plenty more options to come from Mazda’s new electric platform.

Don’t let the Mazda CX-30 bodywork distract you, as what lies underneath is a development prototype of Mazda’s first ever electric car. There is no official name for the car (‘e-TPV’ on the side of the test car stands for electric-Technology Prove-out Vehicle) but we’ve already been behind the wheel ahead of its official reveal at the Tokyo Motor Show in October.

Mazda has confirmed that a 35.5kWh battery pack will power a single electric motor with an output of 138bhp and 265Nm. That will drive the front wheels via a single-speed automatic transmission.

In addition to using a 6.6kW onboard charger for domestic charging, the Mazda EV will also be capable of 50kW rapid charging through a CCS connection. 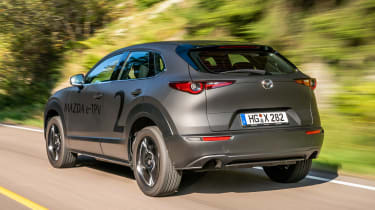 That relatively small battery capacity should provide a driving range somewhere between 120 and 150 miles. Not huge, but Mazda executives claim that as much as 95 per cent of its target customers for this car drive less than 60 miles a day.

For those needing more, Mazda is also planning a range-extender version that uses a compact rotary petrol engine to act as a generator, potentially doubling the overall driving range.

The quoted power output is a step down in performance when compared to other popular models like the Hyundai Kona Electric and Nissan Leaf, and the Mazda prototype certainly lacks that immediate kick of acceleration that so many EVs offer. Its performance feels more on a par with that of a conventional 1.6-litre turbocharged diesel. Nonetheless, the power delivery is silky smooth and there’s sufficient performance on tap for daily commuting.

Inside, the noise is surprisingly like that of a conventional combustion engined car. A digital sound that drowns out the whirr of the electric motor is piped into the cabin, giving the Mazda a more ‘normal’ feel. The idea is to let drivers know, by ear, the car’s speed and acceleration. It does work, but the noise is almost always present, which negates somewhat the inherent silent benefit of an electric powertrain. The system will also emit an exterior tone to warn pedestrians at slow speeds. 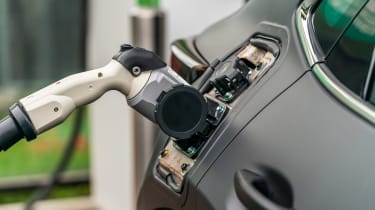 Only minimal regenerative braking was available in this prototype. Mazda is considering adding paddles behind the steering wheel to enable drivers to choose different rates of energy recuperation, and possibly a one-pedal type driving function as the Leaf has.

With passive suspension and an overall weight that is believed to be approximately 1,600kg, the ride quality of the Mazda prototype was smooth. When carrying speed through faster bends, there is some body lean, but nothing beyond what’s typical of a sporty SUV.

What is clear is the noticeable lack of weight in comparison to other electric vehicles. Mazda's engineers are keen to ensure that it will be a fun car to drive, and even after a very brief test drive, they seem to be on the right track with it.