The new 612bhp McLaren GT arrives to take on the Bentley Continental GT and Aston Martin DB11, but how does it compare to its rivals?

We can’t help but feel the new McLaren GT could have been a bit more special. That’s not to say it’s a disappointing grand tourer – it’s fast, comfortable, quiet at speed and practical enough – we just think it should have separated itself from the rest of the range in more dramatic fashion. With further ‘GT’ cars in the pipeline, we can only hope they’ll one day give us the four-seat Macca we so desperately desire.

The distinguished GT moniker isn’t a new concept for McLaren. In 2016, the firm added the 570GT to its Sports Series range – offering a more comfortable and more practical take on its entry-level supercar.

But now McLaren is attempting to forge a little more separation between its Sports, Super and Ultimate Series cars by adding a fourth pillar to the range. Launching with the self-titled McLaren GT, company bosses are remaining coy about where this model may take the brand in the future.

Using an updated version of McLaren’s carbon tub and a tweaked version of the familiar 4.0-litre twin-turbo V8, the GT is also sits on bespoke suspension with proactive damping control. There’s a new steering set-up, new brakes, and new tyres, too. 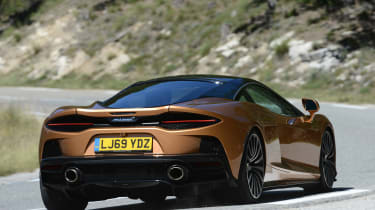 Visually, the GT also introduces a new look for the brand. While it’s still instantly recognisable as one of Woking’s finest, the GT offers a more restrained style, with a longer body and more elevation to the design. That raised stance is key to the GT’s appeal, in fact; McLaren claims it’ll match a Mercedes C-Class for ground clearance.

Pootling around town you’d be hard pushed to disagree. Speed humps and potholes are no longer cause for concern – to the extent that we didn’t find the need to use the GT’s optional nose lift system even once. The ride isn’t faultless, but it never crashes over harsh lumps or sends shocks through to the cabin.

Comfort is something of a moot point, actually. Modern McLarens are famed for their sophisticated ride, with even the harder 720S displaying a baffling blend of compliance and adjustability. And while the GT does the same, it struggles to raise the game in this regard. It’s at its best on longer sections of steady-speed motorway, but at lower speeds it shows an unwelcome stiffness missing on rivals like the cossetting Bentley Continental GT. 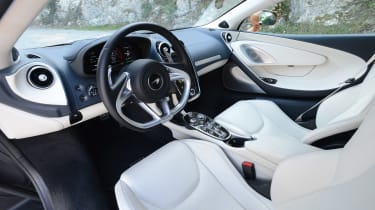 But of course, a grand tourer must be a master of all trades – and when the road gets windy, the McLaren comes alive. The new electro-hydraulic steering has a beautiful weight to it, feeling darty yet easy to control via the chiselled, perfectly formed wheel.

With 612bhp under your right foot, the GT doesn’t lack pace. McLaren has looked to smooth the power delivery with a flatter torque curve, but the result is a slightly laggy driving experience – and one that’s only accentuated by the deep intakes and whooshes from the turbos as the revs rise. The car’s engineers have tried to make the GT sound “more like a V8” and while it doesn’t burble like a Mercedes-AMG S 63 or scream like a Ferrari GTC4Lusso T, it isn’t without appeal.

Join the motorway and this McLaren shows its true GT credentials. There’s a slight drone from the sports exhaust on part throttle, but scale things back and there’s very little in the way of wind or road noise – even on our car’s huge wheels and tyres.

Furthermore, when you take control via the gorgeously tactile paddles and keep the car on boost, the new McLaren GT can keep up with the best of them. It’s engaging and addictive to drive, with each click of the rocker-mounted levers effortlessly firing home another ratio. Such is the car’s level of agility and composure, that it’s just as capable of flowing together a set of sweeping curves as it is negotiating tight hairpin bends. It’s a shame the brakes offer such little feel; the top end of the travel feels numb, forcing you to push hard to gain any real bite.

But a big part of the GT’s attraction is the extra practicality it affords over other models in the range. At 4,683mm, it is the longest McLaren to date –153mm more than a 570GT front to back. However, the maker claims its customers don’t need the functionality of a 2+2, instead choosing to focus on available bootspace and cabin practicality. 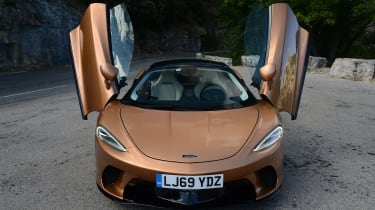 You still have to climb in over the exposed carbon tub, but inside the GT feels especially airy. The electrochromic glass roof bathes the cabin with light, while few supercars or grand tourers can compete with the unobstructed view out the back. It’s impossible not to smile when you catch a glimpse of those huge air intakes through the side mirrors, too.

On paper, the GT’s 420-litre boot trumps a Volkswagen Golf’s with its rear seats in place. However, it’s a very long, shallow load bay, which in reality isn’t half as practical as the wider, deeper opening you’ll find in an Aston Martin DB11. McLaren claims the GT will carry a set of golf clubs or two pairs of skis, but bulkier suitcases will pose a problem. Even when you take into account the 150-litre space in the McLaren’s nose, the GTC4Lusso is class champ when it comes to usable space.

Elsewhere, McLaren has thoroughly updated its dogged infotainment system, and it’s vastly more responsive than before. The menus remains fiddly to navigate, however, and the display-mounted climate controls are a pain to use. Furthermore, the screen sits in a portrait orientation on the dash – meaning it still isn’t supported by Apple CarPlay or Android Auto.