Can Mercedes’ new A 250 AMG dethrone one of the best-ever hot hatches, the Volkswagen Golf GTI? 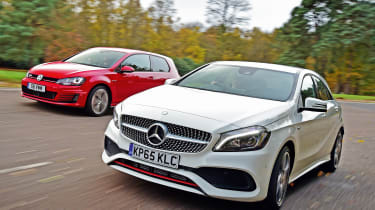 Think of fast Mercedes, and visions of V8-powered saloons, estates and SUVs from its AMG performance division will instantly spring to mind. Yet the sub-brand has expanded its remit in recent years, with cars like the A 45. This pocket rocket features 2.0-litre turbo power and four-wheel drive, and is one of the fastest hatchbacks on the market.

And while there hasn’t been a pure front-drive hot hatch in the ranks, Mercedes has revised the A-Class range and included the A 250 AMG. It features the same 2.0-litre turbo petrol engine as the A 45, although it has been detuned from 381bhp to 215bhp in an effort to give the front wheels a chance of keeping control.

However, if the A 250 AMG finds a way to have the measure of the GTI, it can lay claim to being the best hot hatch in the business. 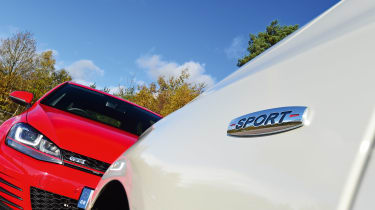 With its chrome-finished diamond pattern grille, sporty bodykit and red detailing, the A 250 AMG looks flashy compared to the Golf GTI.

However, it can be easily confused with lower-spec versions of the A-Class, whereas the GTI has a unique look that means it stands out from the rest of the Golf range.

The GTI badge appeared in 1976 and has been used on every generation of Golf ever since. 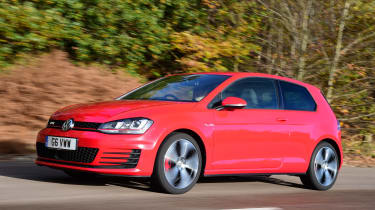 In the seventh-generation Golf GTI, Volkswagen built a gem of a hot hatch. It hits the class formula on the head by combining accessible performance and sharp handling with a practical body and refined road manners. Add in lower everyday running costs, good-value servicing, low tax bills and strong residuals, and it’s a clear winner here. 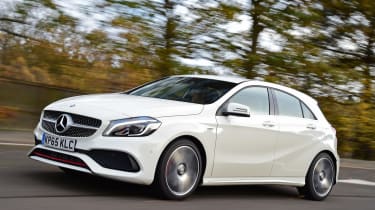 While the A 250 AMG has the performance to match the Golf GTI in a straight line, it can’t hold a candle to it in corners. The chassis is leaden and unresponsive compared to the VW’s, and it resorts to understeer all too readily. It’s not as comfortable when you’re taking it easy, either. The A-Class looks good, but a higher list price and steeper running costs count against it. 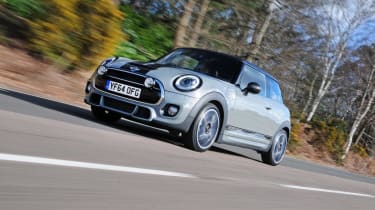 If you don’t need five doors, then the special-edition Challenge version of the Cooper S will turn just as many heads as the A 250 AMG, plus it’s an exciting car to drive. The sharp chassis will put a smile on your face, while 48.7mpg economy is an added bonus. 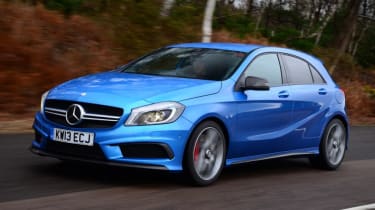 You can get a two-year-old A 45 AMG for a similar price to the new A 250. It has four-wheel drive, a DCT twin-clutch gearbox and a 0-62mph time of 4.6 seconds. Just beware that running costs will be a lot higher as a result.