Mercedes’ new C-Class is sure to be a smash hit with company buyers despite the SUV boom. We test it against rivals from Alfa and Jaguar 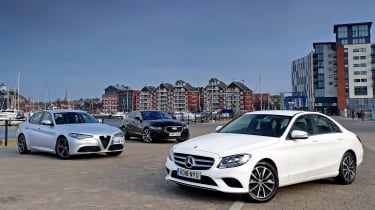 The humble junior executive saloon is having to work harder than ever. With more and more mid-sized premium SUVs being launched, company car buyers are being lured away from the traditional choices by newer vehicles that many people think make more of a style statement.

If you’re in the market for a new company car, don’t make that jump just yet, because there’s a group of compact execs that have been recently updated, while some existing choices still offer plenty of appeal. The latest to receive a refresh is the Mercedes C-Class. The car we’re testing has a new diesel engine that promises more refinement and efficiency, while extra tech adds to the allure.

Alfa, too, has revamped its Giulia range, with more power for the diesel engine and a revised trim structure. One of the more challenging rivals these two models face is the Jaguar XE. It’s been our favourite car in the class for three years running, although it was knocked off the top spot at our New Car Awards earlier this year by the updated Mercedes.  The question is whether this result is replicated in these more affordable specs. 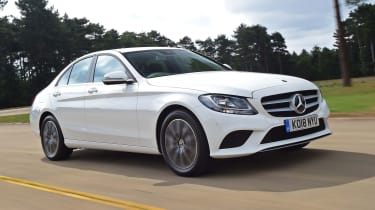 We’ve got an affordable Mercedes C 220 d SE model for this test. This features the brand’s newer 2.0-litre turbodiesel, because diesel power is still popular in a sector where owners often cover high miles. How does the C-Class fare elsewhere?

The Mercedes isn’t as dynamic as the other cars here, even if it does boast more comfort. The chassis hasn’t changed much, so in SE spec on 17-inch wheels the C-Class rides fairly well. It offers compliance, but the body control is looser as a result. This means it floats over crests and into softer depressions, even if sharper inputs occasionally cause a more violent reaction; it’s better than its rivals in this respect, though. 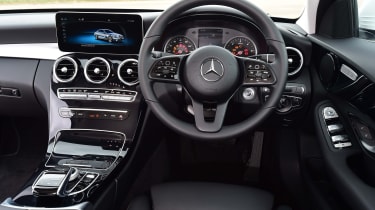 That power advantage means it has the edge over the Alfa and Jag for straight-line performance. On test it sprinted from 0-60mph in 6.5 seconds – faster than the Giulia and XE, which are perceived to be sportier.

The C 220 d’s in-gear flexibility wasn’t quite as strong as its rivals’, highlighting that torque deficit. At most it was 1.2 seconds adrift of its competitors going from 50 to 70mph in seventh, but the C-Class doesn’t feel like it lacks the surge for overtaking when you need it, or punch out of corners.

What the Mercedes has gained from its new engine is refinement. The new 2.0-litre unit is quieter than the 2.2 diesel in the Alfa and the Ingenium unit in the Jaguar. The gearbox is the smoothest, too, with the nine-speed unit shuffling ratios sweetly in automatic mode without any perceptible disruption to drive. It’s a little jerkieron full throttle, but the shifts are quick enough.

The chassis can’t match its rivals’ for involvement or agility, but it is going up against arguably the best two cars in the class in this respect. The steering has a good weight in the Comfort setting; you don’t need to ramp it up to Sport or Sport+ because it then feels artificially heavy, and with no adaptive dampers to adjust, it’s this default mode we’d choose every time.

Testers' notes: “SE specification is relatively well equipped, but more luxurious features, such as the digital dash, aren’t even available as options, which is a pity. Still, the updated cabin feels more hi-tech.” 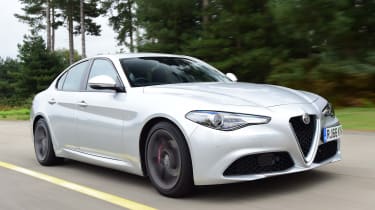 A revamp for the Alfa Romeo Giulia range has seen the trim levels on offer with the higher-output diesel engine cut to one: Speciale. It’s this £36,990 model we’re testing here (an older Super is pictured).

The Giulia also offers the best driving position, which is in keeping with the car’s sporty personality. These diesel models might also balance efficiency, but even next to the Jag, this is the sharpest car to drive.

That stems from the fast steering, which can initially make the Alfa feel overly sensitive, but once you get used to the speed of the rack and the level of input required to make the Giulia turn, it’s very rewarding. The nose bites well and the car feels lighter than its rivals, so roundabouts and country roads are to be savoured in the Italian model, where they’re a little less interesting in the competition.

There’s a high-quality feel to the damping, too. Our car was fitted with adaptive dampers as part of the £1,950 Performance Pack, which adds a limited-slip diff to help agility, and in the softer mode they give the Giulia similarly relaxed ride control to the Mercedes, as long as the road surface is smooth. 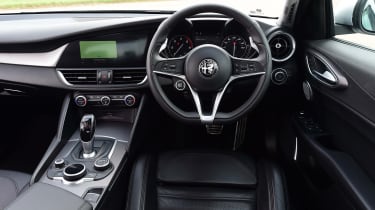 With larger 18-inch wheels and a generally firmer set-up even in the softer mode, the Giulia does skip more over bumps. Firming things up in the second of the dampers’ two stages makes the chassis pogo more over ribbed roads and thump over potholes. It’s not impossible to live with and brings benefits for handling, with even sharper responses and body control, but the standard setting is best.

On test the Alfa returned more than respectable performance. Our figures are for the older 178bhp 2.2-litre turbodiesel, but with a 7.2-second 0-60mph time it matched the new engine’s performance figures, so expect it to be similarly swift, with just as much in-gear flexibility due to its 450Nm of torque.

It was fastest over all our in-gear assessments. However, the box is jerkier going through the gears at full throttle. Changes are snappy, but there’s a pause as the ratios are swapped, especially if you take manual control using the £275 shift paddles. This refinement issue is joined by a grumbly engine as well; it’s not as quiet as the Mercedes’ motor.

In automatic mode the transmission is fine. It’s not quite as intelligent or early to predict what you want as the C-Class’s nine-speed unit, but it’s not as lazy as the Jaguar’s eight-speed gearbox, either.

Testers' notes: “Giulia offers genuinely impressive agility; this is the best element of the car’s handling. The ride is composed as well. Alfa can really cut it with established rivals in many areas.” 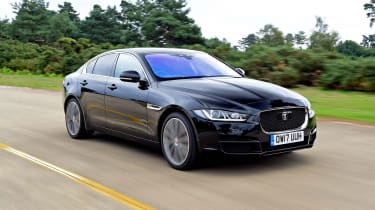 The world had waited a long time for a baby Jag, and when the brand launched the XE in 2015, it shot straight to the top of the class. There have been updates, but have they been enough to keep it there? To find out, we test the £34,065 20d SE auto, although our pictures show a higher-spec 25d Portfolio.

If the Mercedes is the more relaxed cruiser and the Alfa Romeo the sportier, more agile saloon, then the Jaguar splits its rivals’ traits, offering a good level of dynamism with decent comfort.

The steering is fairly weighty, but has plenty of precision. The speed is good and matches the rate of response from the chassis, while there’s a decent level of grip. It rolls a little in corners, but the set-up’s compliant side means that away from our test track and on the road, the XE’s ride makes long journeys and rougher country roads easy to pick apart. 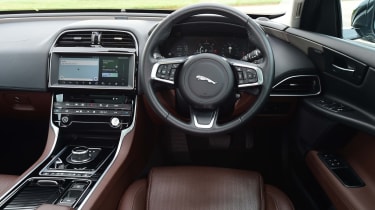 At the track the Jaguar couldn’t match its rivals’ performance. An 8.2-second 0-60mph time was a second down on the Alfa and 1.7 behind the C-Class. This is partly due to the gearbox, which doesn’t allow full revs in first gear off the line, shifting up earlier; it’s also more lethargic to change. Still, the deficit was reduced in gear, and although the XE still couldn’t match the Giulia’s pace, it edged out the Mercedes.

The Jag pulls strongly enough, but it doesn’t feel quite as urgent as its rivals here. It’s also not as refined as the C-Class with its new engine. The Ingenium unit drones at full throttle, and even under lighter acceleration.

Testers' notes: “The steering is the XE’s strongest point. It’s a lovely weight and is the key to the car’s feel. The chassis set-up gives a good balance between compliance and agility. It feels sporty, like a Jag should.” 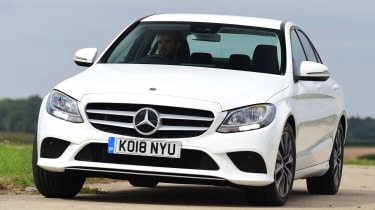 Mercedes has addressed the major flaws with the C-Class. Its new 2.0-litre diesel is smoother, more refined and delivers good performance, while the infotainment is a big step up. It’s also well priced and affordable on finance. Extra practicality makes it easier to live with, while SE trim rides comfortably enough. And when all these attributes are combined, the C-Class takes the win. 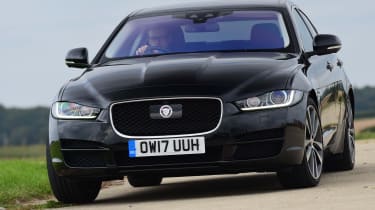 The XE loses out due to its packaging. It’s more cramped than the Mercedes, while its interior technology isn’t as advanced. The Jag is more agile and strikes the best balance between involvement and comfort, but the engine isn’t as tractable or as refined as that in the C-Class. While it’s the cheapest car here to buy, it’s also the least efficient, so will cost the most to run. 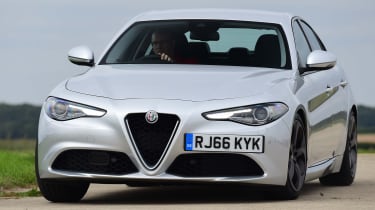 If you’re after engaging handling, look no further than the Giulia. Its steering is super- sharp and the chassis can match it with good body control that doesn’t come at the expense of compliance. The engine is the most eager to rev, but you shatter refinement if you do, while the box isn’t as smooth as either rival’s. It’s more practical than the Jag, but the infotainment is a letdown. 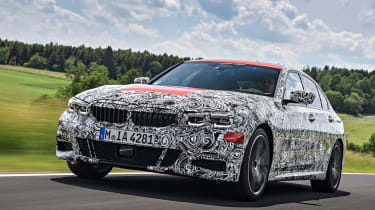 There’s a new 3 Series coming early next year, and we’ve driven it. Expect it to set the dynamic benchmark, while comfort and infotainment are also likely to be brilliant. It could go straight to the top of its class.