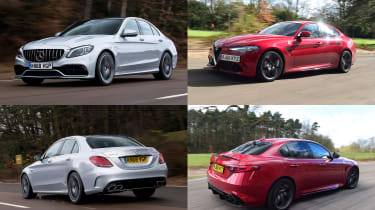 The Mercedes C-Class was updated last year, and while sports saloon fans might not have thought there was too much to get excited about, it means there’s a new AMG version at the top of the refreshed range.

Mercedes-AMG’s C 63 S delivers near-supercar levels of power, with 503bhp from its baritone twin-turbo V8. The C 63 has long been a favourite of ours, offering huge performance potential combined with the practicality of a compact executive saloon – and this updated car promises to deliver even more of that.

But a rival has been making waves in the past few years: the Alfa Romeo Giulia Quadrifoglio. It has all the ingredients to take on the Mercedes, including racy looks, a balanced chassis and the same incredible 503bhp power output. 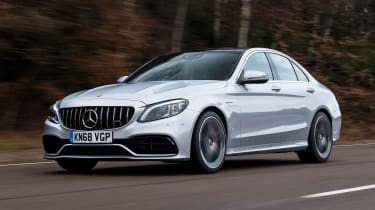 The driving experience in the C 63 S, just like in the pre-facelift model, is dominated by the engine. The 503bhp 4.0-litre twin-turbo V8 is a match for the Alfa’s V6 on power output, but with two extra cylinders and a staggering 700Nm of torque (delivered from just 2,000rpm), the AMG’s motor makes a massive impression.

It starts with a bark, then at low speed the rumble from up front is always present, reminding you that with a press of the throttle the C 63 will hurl itself forward. Engage the sports exhaust to open up the flaps in the pipes, increasing the volume and adding some pops and bangs on the overrun; it’s full of character. The muscular nature of the V8 engine never fails to entertain, too. 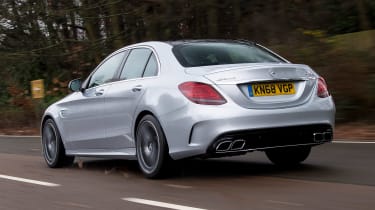 In fact, there’s so much power that both cars struggle to maintain traction from a standing start on a less-than-perfect road surface (or in poor conditions). We recorded a 0-60mph time of 5.2 seconds in the C 63 S, a tenth quicker than in the Giulia. That’s incredibly fast, but the first second or so was spent managing the wheelspin rather than making forward progress.

Our track tests gave us the chance to try out the C 63’s new nine-stage traction control system. It’s clever tech derived from the AMG GT R track car, where it works with real purpose. However, in a roadgoing performance saloon it’s not as useful.

Both models took just 3.4 seconds to go from 30-70mph through the gears, which illustrates just how quick these 503bhp monsters are when you put your foot down. They achieve that in different ways; the V8 AMG rumbles forward on a wave of torque, while the Alfa’s V6 relishes revs for a turbo.

Due to its stiff suspension set-up, the C 63 sometimes fights for traction over bumps and potholes, but it’s improved over the previous version and the Alfa is just as stiff. You can soften the dampers using the changeable driving modes, and in their softest settings these sports saloons are just about on the acceptable side, moving towards being borderline too stiff in their sportier settings. 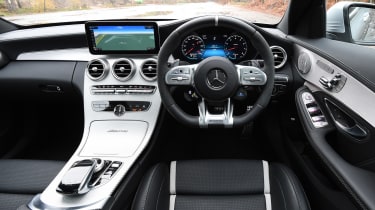 The Mercedes’ steering is weighty and precise, but slower than the Alfa’s rack, so when combined with a heavier kerbweight, it means the car isn’t as keen to change direction at speed.

C 63 S models come with the AMG driver’s package, which increases top speed from 155mph to 180mph, and a lap timer function that can also be used for timing things like 0-60mph sprints. Otherwise the kit matches the Giulia’s, but with a £12,233 price premium and not much to split these cars for performance, it’s a big factor to consider. 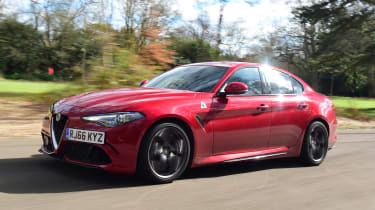 For: Entertaining handling, huge performance, price looks tempting next to its rival’s.Against: Interior feels cheap when you’re paying this much, infotainment system is poor.

Alfa Romeo set out to create a truly competitive compact executive saloon with the Giulia, and in order to match rivals from Germany, that meant launching with a storming performance variant. The Quadrifoglio uses the four-leaf clover badge, in reference to the brand’s racing past; the symbol was painted onto its early race cars for good luck.

Luck doesn’t come into it with this model, though, because it has all the ingredients for greatness: a 503bhp turbocharged 2.9-litre V6 engine, equal front-rear weight distribution, rear-wheel drive and a muscular design.

But while it takes the best elements of Italian sports car design, it does away with some of the traditionally less desirable bits. For example, the Giulia has an excellent driving position, with a lovely relationship between seat, wheel and pedals, plus nice metal gearshift paddles. It’s comfortable and commanding to drive quickly. 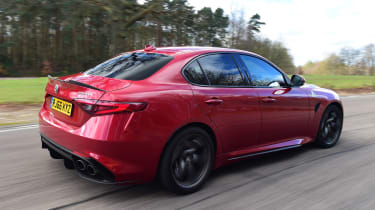 The eight-speed automatic box is less complex than the Mercedes’ nine-speed wet-clutch unit, but it still delivers snappy shifts, although it’s not as smooth in town. The heavier pedal and slightly grabby brakes are a pain at low speed, too, even if they have more feel than in the C 63.

In our tests the Alfa took 5.3 seconds to go from 0-60mph, a tenth slower than the Mercedes; both models struggled for traction off the line due to damp, cold conditions. In summer these times would be faster. Going through the gears showed by how much; traction is less of an issue here. The cars were evenly matched from 30-70mph, taking just 3.4 seconds.

Differences in gearing meant that while the Alfa was half a second quicker from 50-70mph in fifth, posting 2.5 seconds, the C 63 was just under a second faster over the same test in seventh. 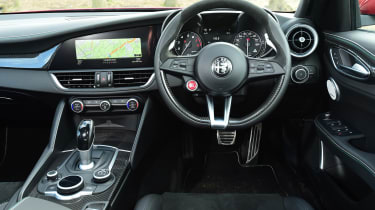 The AMG’s extra torque means its performance is effortless, but the Giulia’s V6 relishes revs, which some will enjoy even more. However, both engines are incredibly potent. Even if the Alfa doesn’t sound as good as the Mercedes’ V8, it’s just as exciting.

The Giulia delivers scintillating handling as well. Its light, ultra-quick steering takes some getting used to, but it plays to the car’s strengths; the lower kerbweight and strong front-end grip allow high corner speed. The Alfa is just as keen to lose traction at the rear as its rival, though, and indulge in slides, but drive sensibly and both cars offer good traction. Standard adaptive dampers and torque vectoring help, and while the option to stiffen the dampers is rarely useful on UK roads, the torque-vectoring tech does improve traction out of corners. 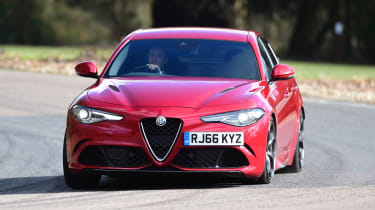 The Giulia Quadrifoglio is a superb driver’s car with its balanced chassis combining driving satisfaction and lots of thrills. Its engine could be more aurally exciting and it doesn’t have the everyday appeal of the C 63, but the Alfa is also far cheaper than its rival. So while it’s close, the price seals it. 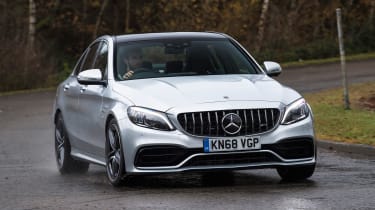 The Mercedes-AMG C 63 S is better than ever. A mid-life facelift has added to its driver appeal and there’s more tech, while the V8 is still brilliant. But it’s more expensive to buy and run, costing over £12,000 more than its competitor with higher running costs but no real performance advantage.