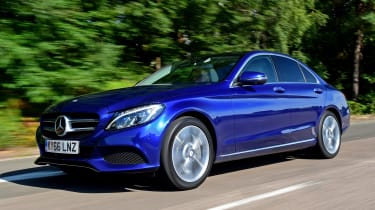 The C 350e isn’t the perfect small executive saloon - there’s still too much of a compromise accompanying the hybrid powertrain - but it definitely merits consideration if you’re doing the maths on your next company car purchase. The quality cabin has real appeal, the car is a comfortable rapid cruiser, and the low tax rate promises real savings over even a four-cylinder diesel model.

Plug-in hybrids are really starting to break through into the mainstream, after many years as little more than niche models. The BMW 330e is bringing plug-in tech to the small executive car class - and now we’ve had a chance to try one of its main rivals, the Mercedes C 350e, on UK roads.

The C 350e takes the existing C-Class but makes use of electric power to deliver some tax-busting CO2 figures - precisely the sort of recipe that can appeal to company car buyers, which account for the sales of so many of these vehicles. 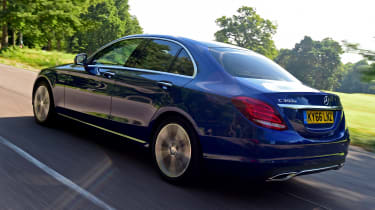 It mixes a 2.0-litre turbocharged petrol engine producing 208bhp, with an 80bhp electric motor. In combination, the two powerplants produce a sizeable 275bhp and, perhaps more importantly, a hefty 600Nm of torque.

Even with the extra 200kg of batteries on board the C 350e looks relatively swift on paper; Mercedes claims 0-62mph takes just 5.9 seconds The limited top speed of 155mph is as fast as all but the most extreme C-Classes, too.

Then there’s the trump card: CO2 emissions. The lab-based fuel efficiency test plays to the strengths of part-electric cars like the C 350e and sure enough, this car emits just 48g/km of CO2. That’s a little up on the 44g/km BMW 330e, but both cars fall into the lowest company car tax band of seven percent - and escape the diesel surcharge to boot. The C 350e is also offered in estate form, incidentally; that car returns 53g/km of CO2 emissions on the official cycle.

The hybrid system is controlled by a small switch at the rear of Merc’s familiar COMAND dial. You just keep pressing it to cycle through the different modes - Hybrid for a mix of electric and petrol power, E-mode to drive on pure electricity, E-save to preserve the level of charge in anticipation of some EV driving ahead, and Charge, where the engine will work slightly harder and top up the battery.

Pure-electric mode is swift enough for use around town, with that instant torque that comes with electric motors - but it tails off noticeably at higher speeds, so don’t think you’re going to be keeping up with a Tesla Model S on a twisting B-road. 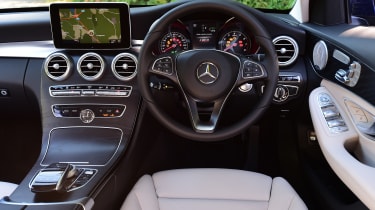 The rest of the time, the hybrid system does a good job of cutting in the engine smoothly when it’s needed, and while the brake pedal modulation does take a little bit of getting used to, it’s no worse than in many other systems where energy is being recuperated.

In fact, in some ways the hybrid set-up suits the C-Class more sweetly than the 3 Series, mainly because the Merc doesn’t have quite the same aspirations of handling agility as its rival. Sure, you can feel the extra 200kg when you fling the C 350e at a corner - it’s not quite as quick to respond as a regular diesel or petrol version - but it’s fine as a relaxed cruiser, in much the same way as its stablemates. Air suspension comes as standard and while the ride isn’t entirely unflappable, even on our car’s optional 18in wheels, it felt pretty composed over all but the worst bumps. 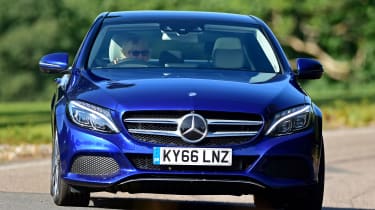 Negatives? The battery pack cuts the C-Class’s boot capacity from 480 litres down to 335 litres – a much bigger compromise than you’ll find on the BMW. The floor itself has a fairly chunky step in it, too, so it wouldn’t be that easy to slide heavier items into place. And then there’s real-world economy. You can forget all about 48g/km and north of 130mpg, because even with regular access to a plug socket, you’ll do well to crack 40mpg.

The rest of the C-Class package is as strong as ever, though; you get the same nicely finished cabin and since the 350e comes only in Sport trim, the kit list is reasonably generous, with a Garmin-based sat-nav system, heated front seats and dual-zone climate control all standard.