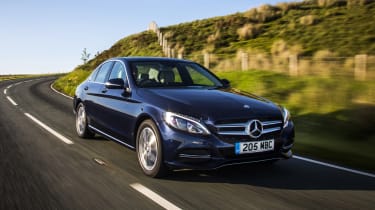 Mercedes has added another string to the C-Class’s bow by installing 4MATIC all-wheel-drive. However, rival models have offered similar systems for years and cars like the BMW 3 Series and Jaguar XE remain better all-rounders. This entry-level C 220d is expensive, too, so unless you really need the superior traction, the standard rear-drive model remains our pick of the range.

As Britain’s best selling saloon, there are plenty of Mercedes C-Class models to choose from, including 4MATIC all-wheel-drive versions to rival BMW’s venerable xDrive models and Quattro-fettled Audi A4s.

The cheapest way to get a 4MATIC C-Class would be to opt for one of the petrol models, but if you’re after all-weather stability mated to a torquey diesel, the lowest cost option is the C 220d 4MATIC Sport, starting from £35,380. That’s £3,000 more than the same car in rear-wheel-drive form, and £5,000 more than the basic C 220d SE model.

Merc’s ubiquitous 2.1-litre four-cylinder diesel unit provides power, with 168bhp and 400Nm torque on tap. The 0-62mph sprint takes 7.5 seconds from standstill, offering more than enough poke for daily life, while plentiful torque means you can push the car along smoothly with gentle squeezes of the throttle.

Go for the 4MATIC system and Mercedes’ 9G nine-speed automatic transmission – a £1,500 option on the rear-drive car – is included as standard. The latest gearbox does a good job of masking the diesel motor’s coarser grunts by keeping revs low at most speeds. On the motorway is where the extra ratios really count, and it’ll happily hum along at less than 1,500rpm. Most of the time it’s a quiet companion, but those oft-highlighted rough edges are exposed if you ask the 2.1-litre diesel to raise its voice a little. 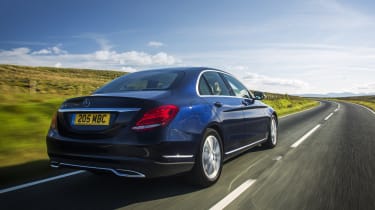 For the most part, the nine-speed box goes unnoticed, generally slurring its way through the powerband without issue. A tug on either of the wheel mounted paddles results in a sharpish cog swap if you’d like a bit more involvement and urgency though.

Standard equipment is reasonably generous, and the S-Class-influenced interior is still among the best in this class. Heated front sports seats and LED lights are part of the package, and so is satellite navigation. However, the Garmin-based system isn’t as slick to use as the setup you’ll find in the latest Audi A4 – especially those with the brand’s brilliant Virtual Cockpit system. 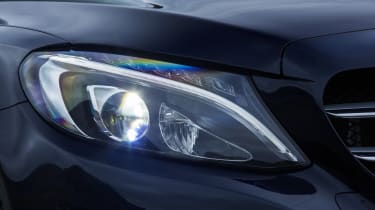 Practicality isn’t hindered by the addition of the 4MATIC system, and boot space remains at 480-litres. Fuel economy takes a hit, though, with combined consumption dipping from a quoted 70.6mpg in the rear-drive car to 61.4mpg in our four-wheel-drive model. CO2 emissions rocket from 103g/km to 122g/km, too, causing a £90 jump in annual VED from £20 to £110.

For most in the market for a diesel C-Class, the normal C 220d will suffice. The lure of 4MATIC is particularly strong at this time of year, and while the extra traction is confidence inspiring, it’s not easy to single out the Merc out as the all-wheel-drive saloon of choice when BMW’s 3 Series xDrive range starts from less and Audi’s A4 Quattro is fresher and marginally better built.