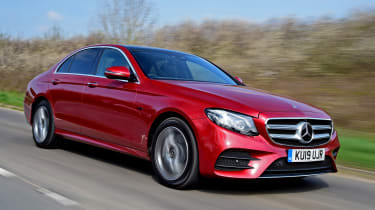 The Mercedes E 300 e keeps everything that we love about the E-Class – hushed refinement, a gorgeous interior and a smooth ride – and adds some major savings on Benefit-in-Kind tax costs. If you often make short journeys and have easy access to a charger, your fuel bills could be minuscule, too. But if you regularly cover longer distances, the diesel E 300 de may be a better bet.

This is the new Mercedes E 300 e hybrid, the brand’s answer to the BMW 530e. It replaces the E 350 e, but don’t let the smaller (and still arbitrary) number on the boot fool you, because the car promises better performance and lower emissions.

Like its predecessor, the new E 300 e combines a 2.0-litre turbo petrol engine and an electric motor. The battery capacity is up to 13.5kWh, which is good for around 30 miles on electric power alone. It can be replenished via a 7.2kW charger in an hour and a half – a time that grows to five hours if you’re using a three-pin plug. 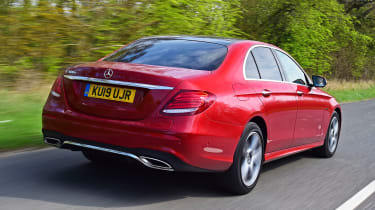 While the battery itself is smaller than the old car’s, it still eats into the boot. Total volume is 15 litres up on the E 350 e, at 410 litres (identical to the 530e), but well off the 530 litres of a regular E-Class. Mercedes also houses the battery in a box section, leaving the boot an awkward shape, which is made worse by the fact that there’s no convenient cubby to take the charging cables.

However, the E 300 e weighs the best part of 300kg more than the combustion-engined model. So while the hybrid pulls briskly, there are times – such as when you prod the throttle in the hope of kickdown – when it can feel lethargic.

The extra mass can be felt in other ways, too. The body pitches and wallows more, and the car is a little more reluctant to change direction, but it’s nothing drastic. 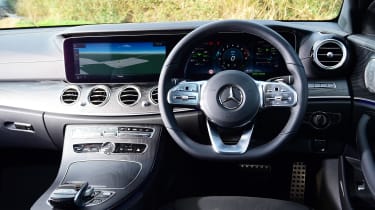 There are four hybrid modes to choose from, and the brake regeneration system takes into account traffic, corners and hills to decide when and how to charge the battery. Yet it can seem too clever for its own good, giving an inconsistent response.

You may be attracted by the economy, but the WLTP-certified 156.9mpg is largely irrelevant, because what you achieve will vary wildly. On a couple of short city runs we saw as much as 700mpg, but a motorway journey returned mid-to-high thirties.

Tax is the real incentive and emissions of 46g/km put the 300 e on par with the 530e for company car users: Benefit-in-Kind costs for both are roughly £2,600 per year if you’re in the 40 per cent tax bracket. The E 200 will set you back more than twice that.