Higher-spec versions of new exec have impressed. What about entry diesel? 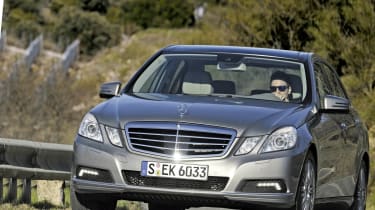 Mercedes has stuck to what it does best, which is why the E-Class sets new standards for build quality, comfort and technology. And with the range of new powerful but frugal four-cylinder diesel engines, the firm is offering the prestige without the traditional price tag. For an extra £1,000, the more powerful E250 CDI is arguably a more appealing choice than this E220. Yet even without the thrills of a 5-Series or flair of an XF, the E-Class maintains Mercedes’ status as a leader of the executive class.

It’s E for Efficiency! Mercedes is going green with its new E-Class, as every model in the range – bar the petrol V8s – uses BlueEFFICIENCY technology.

Weight has been reduced, aerodynamics improved and low-rolling-resistance tyres fitted. But by focusing on the environment, has Mercedes forgotten what the E-Class is all about: a luxurious driving experience? We drove the version predicted to be the top seller – the E220 CDI BlueEFFICIENCY – to find out.

Under the bonnet, an all-new four-cylinder diesel engine develops 168bhp and 400Nm of torque. Offered with a five-speed auto transmission from launch, it returns an excellent 47.1mpg combined and emits 159g/km of CO2.

If it wasn’t for the badge, you’d be hard pressed to tell this is a diesel. It’s smooth at all times even if, despite the huge torque output, it could do with better overtaking pick-up. The more powerful E250 CDI is faster, although refinement still impresses, with road roar from the harder-compound tyres and wind noise virtually eliminated. Adaptive dampers are standard and work magnificently, staying compliant in regular driving and firming up in fast bends. Throw the E-Class into a corner and the steering doesn’t offer the same feel as a BMW 5-Series or Jaguar XF. As a long-distance cruiser, though, the big Merc is peerless.

The first variant to go on sale is the entry-level SE, which has leather-trimmed, powered seats and climate control as standard. And to keep things simple, there will be only three variants, with Avantgarde and Sport completing the line-up. There is twice as much scope for personalisation as on the previous car, though, so even the most discerning customer won’t be left wanting.

Rival: BMW 520d while the 5-Series can’t match the Merc’s kit or comfort over long distances, it’s the class’s best driver’s car. Residuals are impressive, too, and the 520d serves up an appealing blend of 136g/km CO2 emissions and 55mpg fuel economy.